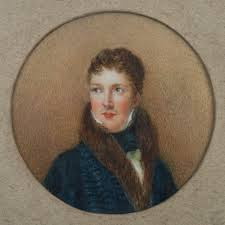 Everyone who has an interest in either the Duke of Wellington or the Battle of Waterloo has heard of Henry Percy, above, the officer sent from Brussels to London on a mission to deliver Wellington’s Waterloo Despatch – the official report that would unquestionably confirm the Allied victory at Waterloo.

PERCY, HENRY (1785–1825), colonel, aide-de-camp to Sir John Moore and to Wellington, fifth son of Algernon Percy, baron Lovaine, who was created Earl of Beverley in 1790, and brother of Hugh Percy [q. v.], bishop of Carlisle, and of Vice-admiral Josceline Percy, was born on 14 Sept. 1785. He was educated at Eton, and on 16 Aug. 1804 appointed lieutenant in the 7th fusiliers. He became captain unattached 9 Oct. 1806, and captain 7th fusiliers on 6 Nov. following. He was aide-de-camp to Sir John Moore at Coruña. On 21 June 1810 he was transferred as captain to the 14th light dragoons. He was taken prisoner with a party of his regiment during the retreat from Burgos in 1812, and was detained in France until the peace. In 1815 he was appointed aide-de-camp to the Duke of Wellington. He brought home the Waterloo despatches, arriving post in London on the evening of 20 June with the despatches and captured eagles, and was next day made C.B., and a brevet lieutenant-colonel from 18 June 1815. He retired on half-pay in 1821, and was returned to parliament for Beeralston, Devonshire, in 1823. Once a gay, handsome young fellow, he prematurely lost his health. He died at his father’s house in Portman Square, London, 15 April 1825, in his fortieth year, and was buried in the cemetery of St. Marylebone. [Foster’s Peerage, under ‘Beverley;’ Army Lists; Gent. Mag. 1825, pt. i. p. 567.] 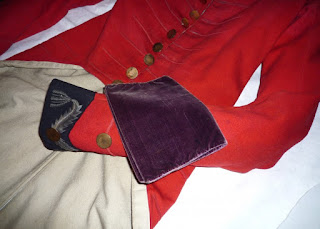 “This wallet or sachet of purple silk velvet and crepe, maker unknown, is traditionally said to be a lady’s handkerchief sachet. It played a vital role after the Battle of Waterloo, as it was in this case that the Waterloo Dispatch travelled back to London from Belgium. The Dispatch, carried by Major Henry Percy, was the Duke of Wellington’s account of the battle, and was the first news received by the British government of the Allied victory. The case is photographed on Major Percy’s uniform in which he fought at Waterloo.”

What we have not heard before now are the details of Percy’s journey to London and of the many others who played a part in the delivery of the Despatch. I’ve just finished reading Brian Cathcart’s excellent account of the story behind Percy’s ride and the many ways in which the Allied victory impacted Britain, English society and Europe as a whole. 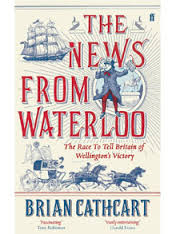 The News from Waterloo: The Race to Tell Britain of Wellington’s Victory
by Brian Cathcart

“This is a tragi-comic midsummer’s tale that begins amidst terrible carnage and weaves through a world of politics and military convention, enterprise and roguery, frustration, doubt and jealousy, to end spectacularly in the heart of Regency society at a grand soirée in St James’s Square after feverish journeys by coach and horseback, a Channel crossing delayed by falling tides and a flat calm, and a final dash by coach and four from Dover to London.
“At least five men were involved in bringing the news or parts of it to London, and their stories are fascinating. Brian Cathcart, a brilliant storyteller and historian, has visited the battlefield, travelled the messengers’ routes, and traced untapped British, French and Belgian records. This is a strikingly original perspective on a key moment in British history.”
Cathcart uses Percy’s ride as a platform to write about all manner of subjects related to Regency England – road travel, the telegraph, channel crossings, newspapers and banking, society and politics. The News From Waterloo is a vivid, entertaining read and should be a part of every Waterloo/Wellington/Regency library.
George the IV famously promoted Percy on the spot at the Boehm residence in St. James’s Square once he’d delivered the Despatch and placed the French Eagles at the King’s feet. What is lesser known is that Wellington himself acknowledged his debt to Percy by gifting him with a Breguet pocket watch. I urge you to read the full article on the watch which can be found here. 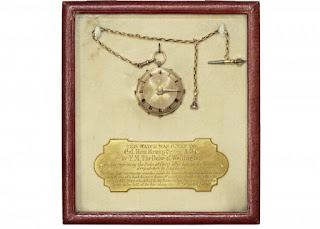 This is a pocket watch that belonged to Major Henry Percy, a British officer who fought at the Battle of Waterloo, and was chosen to deliver the Duke of Wellington’s dispatch back to London. Carrying news of the Allied victory at Waterloo to the British government was a vital task. In recognition of his work, the Duke of Wellington gave Major Percy this watch – made by the Parisian clockmaker Abraham-Louis Breguet, one of the most famous artisans of his time.
At the same time that Wellington bought Percy’s watch, he also purchased one for himself. Wellington had his watch fitted with an extra cover that held a minature portrait. The lady in the miniature is Marianne Patterson. You can read more here. 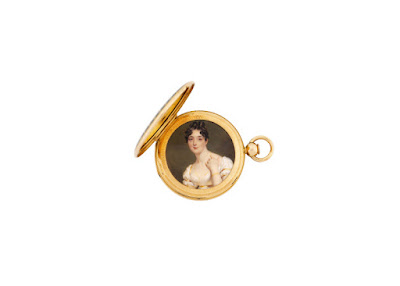