Summer is ending for another year and soon Victoria will lament the closing of the Regency House swimming pool until next May. Sigh. Of course, I will be in Florida by mid January, ready for another pool — and the lovely beaches too.

Sea Bathing became increasingly fashionable in the 18th century as doctors praised the beneficial effects of drinking sea water and bathing in the cold salt-water of the Channel, or the North or Irish Sea. 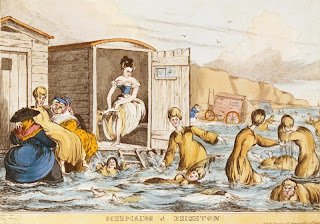 The print above, by William Heath (1795-1840), ca. 1829, depicts the Mermaids of Brighton near their bathing machines.  On the left two sturdy dippers, as the women who assisted the bathers were called, help a girl in a sort of loose garment like a shift (or a shroud???). Inside the wooden structure, another young lady begins to disrobe, while others cavort in the water.  How very different than the look below, the Italian swimming star in the London Olympics, Federica Pellegrini. 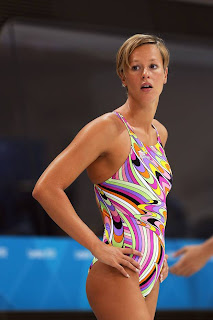 But apparently, not all sea bathers were clothed at all!  The caricature below by Thomas Rowlandson (1776-1827) is entitled Summer Amusement at Margate, or a Peep at the Mermaids and clearly shows a group of men oogling the nude bathers. 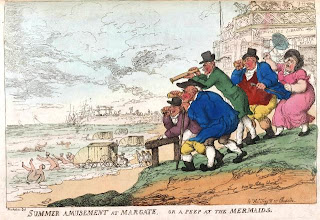 Even more revealing is Rowlandson’s Venus Bathing (Margate): A Fashionable Dip. Margate is in Kent. 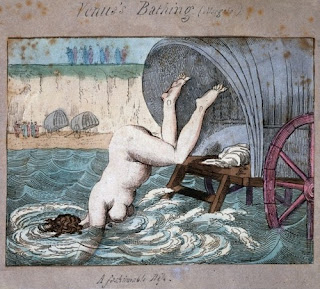 And its companion engraving by Rowlandson, Sideway or any way, in which a crowd seems to have gathered at the top of the cliff to observe: 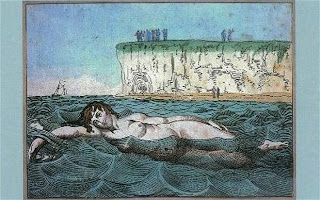 Most fashion plates from the early 19th century show ladies dressed quite properly indeed.  Below, From Ackermann’s Repository, 1809: 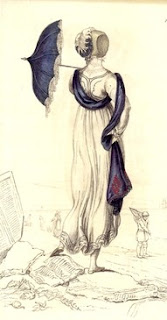 La Belle Assemblee chose this costume for sea bathing in 1815. Note the bathing machines in the background, lower right: 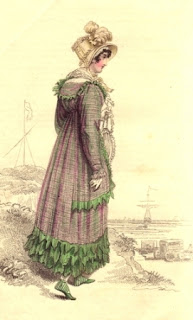 The Bathing Machines were built to various designs, but most had an enclosed room on high wheels in which one could dress and undress.  The vehicles were pulled out into the water by horses, donkeys or even humans.  Many had large canvas awnings which could be lowered for privacy.  The bather enters the water via steps and may be assisted by a helper, the dipper, as seen in the first engraving above. 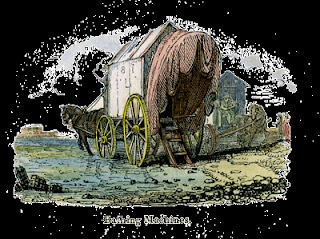 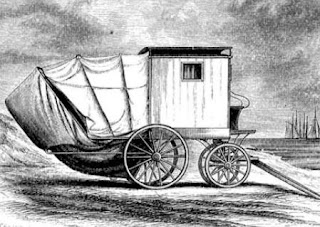 Another Version
One of the dippers, Martha Gunn, became famous in Brighton, a favorite of the Prince of Wales, and became an advertisement for the resort itself.  Her portrayal below shows her importance as she wears the Prince’s three feathers on her hat. 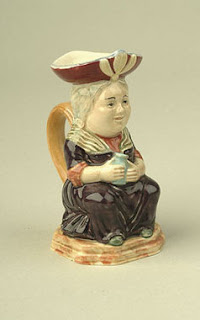 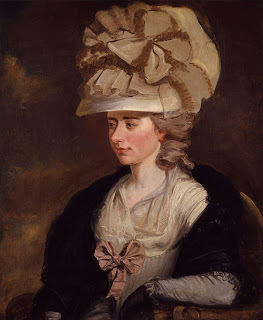 “Ever since I went to Torbay, I have been tormented with a dreadful cold and very much advised to sea bathing in order to harden me…. I was terribly frightened, and really thought I should never have recovered from the plunge. I had not breath enough to speak for a minute or two, the shock was beyond expression; but after I got back to the [bathing] machine, I presently felt myself in a glow that was delightful – it is the finest feeling in the world, and will induce me to bathe as often as will be safe. “ 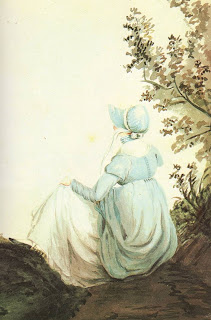 Jane Austen too indulged in  sea bathing.  Her family often visited coastal resorts.  She wrote to Cassandra from Lyme:

Friday 14 September 1804
“…I continue quite well, in proof of which I have bathed again this morning.  It was absolutely necessary that I should have the little fever and indisposition, which I had;–it has been all the fashion this week in Lyme…”

That evening, she added, “…The Bathing was so delightful this morning and Molly so pressing with me to enjoy myself that I believe I staid in rather too long, as since the middle of the day I have felt unreasonably tired. I shall be more careful another time, and shall not bathe tomorrow, as I had before intended…

I hope you have time, if you wish, for a few more dips in the sea or the pool this season. 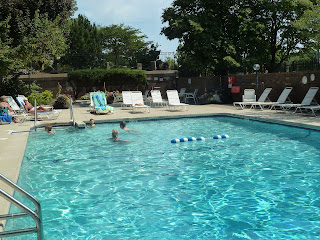 The pool at Victoria’s Building