In writing about the recent films The Young Victoria (see blogpost of April 28) and Bright Star (blog post of March 27), I thought about all the excellent older films about English history and literature I remember from years past.


Two of my favorites were just a couple of years ago. 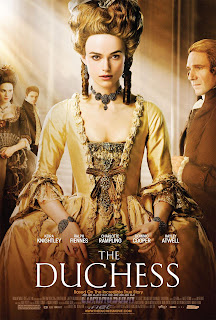 The Duchess (2008) was based on Amanda Foreman’s biography of Georgiana, Duchess of Devonshire, (1756-1806) starring Keira Knightley, Ralph Fiennes and many other outstanding actors. See a trailer here.

In my opinion, it was a well-done film, basically accurate, though the events of the screenplay seemed to condense the period of time covered. Ms. Foreman is on record as approving of the film. 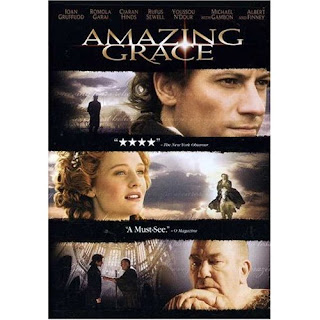 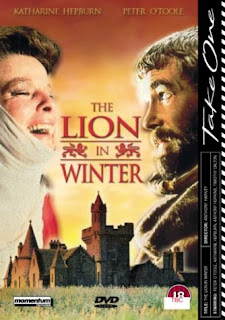 Who can resist the battles of Henry II and his Queen, Eleanor of Aquitaine, in The Lion in Winter (1968) starring Peter O’Toole and Katherine Hepburn. The screenplay was adapted from his stageplay (1966) by James Goldman. Set in AD 1183, the story gives the stars some outstanding opportunities to spar with one another over the succession after Henry’s death. Here is a trailer. 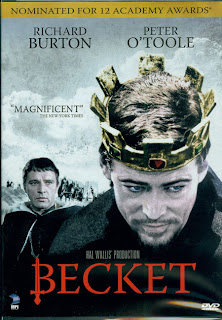 Henry II was played by Peter O’Toole a little earlier in the 1964 film Becket. Based on a play by Jean Anouih, the story of Becket’s martyrdom is brilliantly done. Richard Burton stars as Thomas Becket, one of his finer performances in a career that often served from the heights to the depths and back again. Becket garnered a raft of awards and nominations. 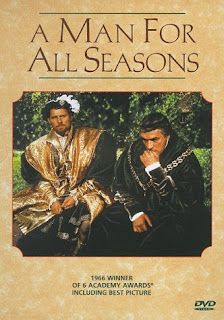 A Man for All Seasons came out 1966 starring Paul Scofield as Sir Thomas More.  It originated with the play by Robert Bolt about the controversy over ending Henry VIII’s first marriage.  Orson Welles appear as Cardinal Wolsey and Leo McKern as Thomas Cromwell as they all argue over Henry’s determination to marry Anne Boleyn in the 16th century.

Both of the following links to trailers may require you to watch an ad before the REAL trailer. Here I  and/or here II.  I despise the ads on these trailers — and come to think of it, on some DVDs where you can’t duck them by any means.  Grrrrrrr.  So much for my ranting. 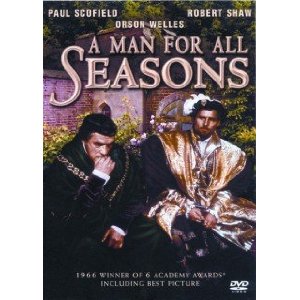 For my money, Robert Shaw plays a great Henry VIII, far better than Jonathan Rhys-Meyers in the currently running The Tudors on Showtime — who is pretty good, just not up to Shaw. Paul Scofield won a Best Actor Oscar for his portrayal of Sir Thomas;  Wendy Hiller portrayed his long-suffering wife. 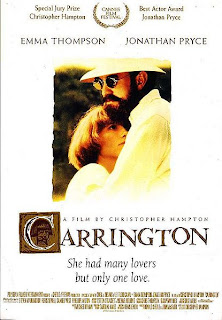 And now for something entirely different…
Many of us have a long-lasting fascination with the members of the Bloomsbury Group — their Bohemian lifestyles, their experimentation in the arts and in their personal lives and sexual preferences. The story of Dora Carrington, rather a peripheral member of the group, is told in Carrington (1995). The film stars Emma Thompson as Dora Carrington, Jonathan Pryce as Lytton Strachey, part of the Bloomsbury group in the time of WWI. Many more favorites appear and I believe the film was shot at some of the Bloomsbury Group’s favorite haunts. A recent review includes link to the trailer.

I’ll stop for now, but whenever I make a list of favorite films, more come to mind — for another day. Please let us know what your favorite British films are, meaning those about Britain, not necessarily always made in Britain.