These dogs were known by a number of names—Canis vertigus (Carl Linnaeus gave them this name in the 1700’s – “dizzy dog” because they were always spinning,) vernepator cur (Latin for “the dog that turns the wheel”) and more commonly, the turnspit dog. The first mention of them in written record was in 1576 in the first book on dogs ever written. Their existence is acknowledged from the 1500’s forward and they were considered an essential part of every British kitchen well into the 19th century.

The job of the turnspit dog, simply put, was to turn the meat roasting over the open hearth found in nearly all British kitchens from the 16th century forward. Cooking meat in an oven was frowned upon and roasting any meat, be it beef, lamb, pork or even turkey, over an open fire was the preferred method of doing so. Interestingly, have one’s meat turned by a turnspit dog was eventually considered a sign of poverty. In homes where a servant was given the task, it was usually done by the lowliest member of the kitchen staff, the potboy, for instance. If one could not afford to pay a servant to turn the spit, a dog was the least expensive way to get the job done.

How did turnspit dogs turn the meat on the spit? Anytime meat was to be roasted, one of these dogs was hoisted into a wooden wheel mounted high on the wall near the fireplace. But not too close as the heat might make the dog faint or even die. The wheel was attached to a chain which ran down to the spit. As the dog ran, the spit turned. Think hamster wheel. The turnspit dog was viewed as a kitchen utensil rather than a dog. 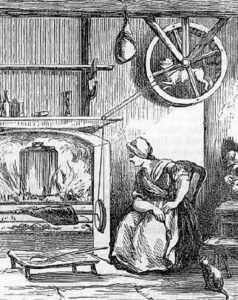 These dogs were bred to this purpose. The breeding had far less to do with bloodlines than it had to do with size, tenacity, and athleticism. They tended to be “long-bodied, crooked legged, and rather ugly little dogs.” This description appeared in Edward Jesse’s book Anecdotes of the Dog, published in 1846. They were bred primarily for two qualities: 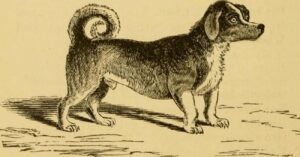 In addition to these physical attributes, it was often said of these dogs that they had a morose disposition and “suspicious” and “unhappy” expressions. One can scarcely begin to wonder why!

The dogs were afforded one day off, Sunday, if one could call it a day off. They were normally taken to church with the family to act as foot warmers. There is the story from Bath that claims the Bishop of Gloucester set off a turnspit dog rampage when, in the middle of his sermon he said the words “It was then that Ezekiel saw the wheel.” The story goes, when the turnspit dogs in attendance at their masters’ feet heard the word “wheel” they fled the church, afraid they were being sent back to work.

The life of a turnspit dog was one of monotony and control. They were confined to keep them from running away. They were trained from an early age to run for hours on end. They were fed well enough to sustain their muscles, but not enough to ever be fully sated. A dog with an appetite for meat could be tempted to run longer. They were not confined to the wheel save for the hours they had to work. They were likely some of the few dogs in poorer households who were completely house-trained. It is likely they were confined to small boxes when they were not working. Several records report that the dogs were owned in pairs so as not to overtax one dog.

By 1750 there were turnspits everywhere. By 1850 they were scarce and by 1900 they had disappeared completely, replaced by machines. The breed essentially became extinct as it was said that people did not want to keep ugly little morose dogs as pets. Interestingly enough, Queen Victoria is said to have kept three retired turnspit dogs as pets. There are some who say the Welsh Corgi is actually descended from the turnspit dogs of the 19th century.

Follow this link to see what many consider the last turnspit dog, Whisky, preserved by a taxidermist and held at the Abergavenny Museum in Wales.