Henry Nock died in November, 1804 and listed no legal heirs in his will. He left his stock and business to James Wilkinson, his foreman. The pertinent entry in the will read:

I leave to my foreman, James Wilkinson,

Ludgate Hill and I hereby give to Ann, the wife of James Wilkinson

While Nock had no legal heirs, it is believed he had essentially adopted Ann and her brother, John, when their father, one of Nock’s workers, died. As Wilkinson frequently identified himself as Nock’s son-in-law most agree that is the case. This theory is credible as on later trade labels James Wilkinson refers to himself as “Successor and Son-in-Law to the Late Mr. Henry Nock.”

A label inside a case for a pair of pistols made after Wilkinson took over the business reads:

and the Hon East Indian Company

Successor to the late H. Nock

James Wilkinson had been foreman and general manager of Nock’s many workshops all over London. He was, however, quite inventive himself and a superior businessman. Wilkinson became Gunmaker-in-Ordinary to the king in 1805. Contracts with the East India Company ensured the success of the business. The name became James Wilkinson & Son around 1818 when James’ son Henry joined.

Because of the company’s superior work in creating bayonets and swords it eventually became Wilkinson Sword and continued to make fine weapons until 2005. The company survives making razor blades and other products.

Took over father’s Gunmakers business at 59 Lombard Street up to 1810.

Gunmakers business at 45 Cornhill 1800 to 1816. A family business for several generations. 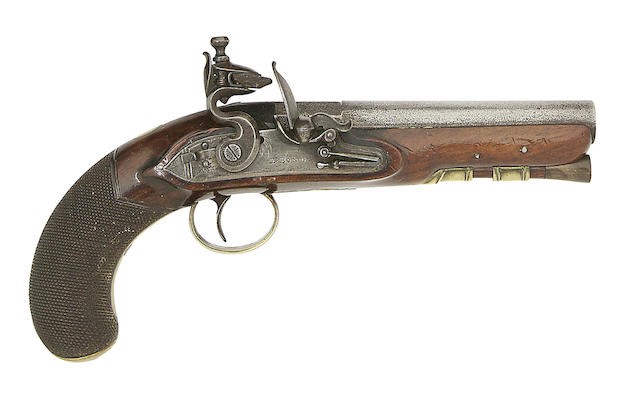 The Boss family originated from Leicestershire and had no roots in gunmaking when William Boss began an apprenticeship in 1773, aged just 15. His commitment to becoming a gunmaker was clear, and he moved away from his family to Birmingham to be closer to his mentor; gun and pistol maker Thomas Ketland.

Excelling at his craft, and already making a name for himself, William Boss then moved to London where the finest guns were being produced. There he could further refine his skills and become a part of the dominating London gun industry.

Soon he found a new mentor: Joseph Manton, a leader in his field and a man who only employed top-rate journeymen which, by this time, William was now known.

Staying with Manton for a number of years, William fathered three sons during his time with the firm, each of whom became an apprentice to their father. Sadly, while teaching his youngest son Thomas the art of gunmaking, William died. At this time, the death of a gunmaking father marked the end of any apprenticeship for his remaining sons. But Manton made an exception for the 19-year-old Thomas and allowed him to continue with the firm as his natural talent for the craft was clear.

Eventually Thomas established a name for himself as a top gunmaker. Working mostly as an outworker, a position that saw him finishing guns for the best-known gunmakers of the time, was something he excelled at.

This way of working continued for many years and the sheer scale of the London gunmaking business at this time meant he was a man in demand. The quality of his workmanship ensured his reputation as a gunmaker of esteem across the city.

In 1812 Thomas placed adverts in newspapers addressed to gentlemen, sportsmen and others, announcing the establishment of Boss & Co. These adverts promoted ‘self-acting safety guns, constructed to remove all apprehension of danger as they cannot be discharged except when held in the shooting position’. These guns were manufactured ‘in a superior style of elegant workmanship’ by Thomas Boss of Edgware Road, London.

At this time Thomas provided home visits to potential customers by day, and at his private home of an evening, but that was soon to change.

As is true of any company wanting to make a name for itself amongst established competition, Thomas Boss knew the importance of image.

A home visit was a great way to start, but the monied gun buyers of London liked the kudos of visiting premises where they could touch and feel the product and see it being made. A move to the West End sent out the right message, and 73 James’s Street became the home of Boss & Co.

As the reputation of Boss & Co grew, so did the number of customers through the door. Soon Thomas Boss sought his own apprentices and journeyman gunmakers, needing up to ten skilled staff and two apprentices. Two of these new employees were nephews of Thomas Boss, men who would go on to play an important role in the future of Boss & Co as it developed.