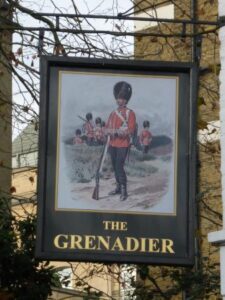 The building that houses The Grenadier was originally built in 1720. It served as the officers’ mess for the senior infantry regiment of his His Majesty’s Army, the 1st Regiment of Foot Guards. The building was, in fact, located in the courtyard of their barracks. This particular regiment played an important role in the defeat of Napoleon at Waterloo. And after they defeated the emperor’s French Imperial Guard they felt the need to adapt the Imperial Guard’s bearskins as their regimental trademark and they changed their name to the Grenadier Guards. Apparently when one whoops the derrieres of Napoleon’s elite one can do that.

It is understandable then that when the building was repurposed as a tavern called The Guardsman in 1818 that many of its customers were members of the regiment still housed in the nearby barracks. In honor of their success at Waterloo it wasn’t long before the tavern changed its name to The Grenadier. Because of its rather out of the way location, the Duke of Wellington and even King George IV are said to have stopped by for a pint or two. 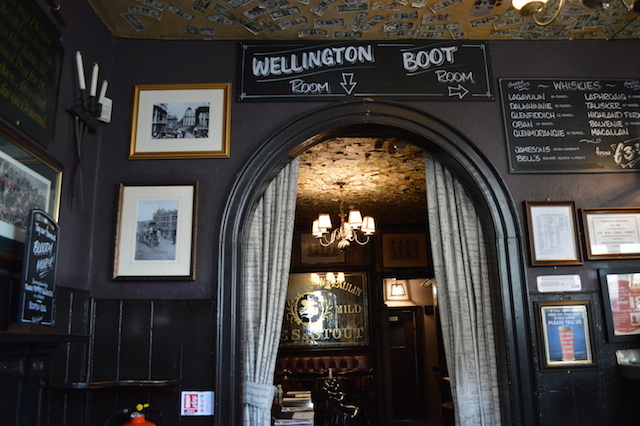 The upper rooms of the tavern were used by the more urbane customers. The common soldiers used the cellar as their personal haven to drink and wile away the hours playing cards. It is said on a September evening in 1818 a young Grenadier guard named Cedric was caught cheating at cards. His fellow card players punished him with a beating so brutal he died, right there in the cellar of The Grenadier.

And apparently, Cedric never left. Whilst his presence is felt in various ways throughout the year, for some reason the month of September still gets Cedric stirred up. During September a solemn, silent spectre is said to be seen moving slowly across the low-ceilinged rooms. Objects have been known to disappear or to be moved during the night. Unseen hands rattle tables and chairs. Footsteps have been heard in empty rooms. Low moans can sometimes be heard from the cellar when there is no one down there. At times rooms in the pub become icy cold and can remain so for hours, days, or even an entire month at the time.

A Chief Superintendent from New Scotland Yard was having a drink at The Grenadier one evening when he noticed puffs of smoke swirling around him. He reached out to try and detect the source of the smoke and snatched his hand back in pain. He’d been burned by a cigarette. The thing was, there was no one there.

Another even more recent event involved a barman who went down into the cellar to fetch some cigars for the bar. Cigarette breaks were hard to come by, especially when The Grenadier was busy. He stopped for a moment to have a cigarette. The landlord’s cat appeared in the cellar, an unusual event in and of itself as the cat wasn’t ever allowed out of the owner’s flat over the pub. Suddenly the cellar turned icy cold. The barman’s crystal ashtray flew across the room into the wall. The cat bowed up and sank his teeth and claws into the barman’s ankle. Needless to say the barman shook off the cat and shot up the stairs out of the cellar and back into the pub.

The Grenadier is still hard to find if you don’t know exactly where it is. The building is surrounded by lovely cottages and one must weave in and out of various cobblestone lanes and narrow private side streets to reach the beautiful Georgian building beneath the shade of a magnificent tree. The distinct red and blue accents against the whitewashed walls gives the pub a distinct pop. 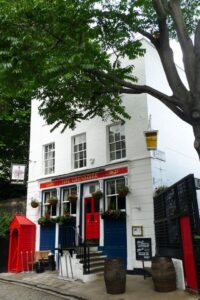 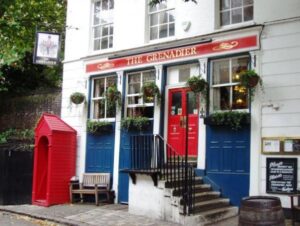 The Grenadier is the typical old pub with random objects on the walls and sturdy wooden furniture. The Boot Room is where the general public imbibes as it has more of the common touch. Which includes a ceiling papered with pound notes. Why? To pay Cedric’s gambling debts, of course. If one doesn’t want to incur his wrath or have him light up a cigarette next to one it is best to do one’s part. 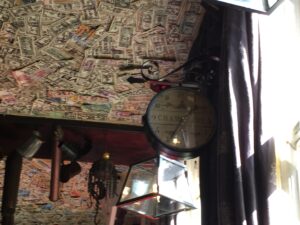 The Wellington room is a bit more elegant with ornate mirrors and leather Chesterfield seating. Which creates an atmosphere that has been called spooky. Be forewarned.

For a more personal visit to the most haunted pub in London, check out this post by our very own Kristine Hughes-Patrone and her travel companions!