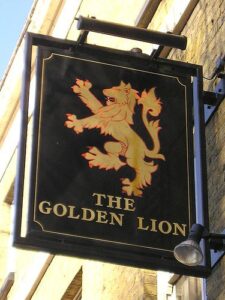 There has been a tavern on this site since “God was a lad,” to quote one patron. The current establishment was originally built in 1762, but there was a tavern there even before the current incarnation. Records show a tavern located here as early as the 1730’s. It was once a smaller structure. In the early 19th century the tavern expanded into the neighboring house and the current frontage was added. The present day decor is from the early Victorian era. Its location in the St. James area of London put it in close proximity to the exclusive gentlemen’s clubs like White’s, Brooks, and Boodles.

The tavern’s proximity to Almack’s Assembly Rooms no doubt made it the favorite haunt of young Regency gentlemen forced to attend the Society subscription balls designed to “help” them find a wife. The fare at Almack’s left something to be desired, especially in the beverages department. I suspect many a young gentleman nipped out of Almack’s for a quick brandy or three at The Golden Lion before he had to return to dance with whichever young lady his mother deemed worthy of his attentions.

Another attraction of The Golden Lion was the fashionable hotel next to it. The hotel was established by John Nerot in 1776 in a house which had previously been the town residence of Richard Jones, Earl of Ranelagh. The building was probably built during the reign of Charles II. It had a grand, heavy staircase ornately carved in the fashion of the day. The carved panels depicted images of Apollo and Diana from mythology. The hotel sported no fewer than twenty-four windows across the front of the house.

Anyone who was anyone stayed in Nerot’s and very likely frequented The Golden Lion for some relaxation and good company. Patrons of Nerot’s included Edmund Burke in 1795 and Lord Nelson, who met his wife and his father there after his return from the Battle of the Nile in 1800. In 1811 the hotel was moved to Clifford Street. In 1830 the house was known as a ware room.

In 1835 the building was purchased by the renowned tenor, John Braham. He demolished the hotel and built a theatre designed to showcase his talents as a singer. In addition to Braham, The St. James’ Theatre featured works by Shakespeare, Ben Johnson, and eventually plays by Oscar Wilde and even a farce by Charles Dickens. There was also a popular show featuring performing lions, monkeys, dogs, and goats.

Once the theatre opened in 1835, The Golden Lion enjoyed a booming business from its patrons. In fact, the pub’s upstairs bar was connected to the theatre by a walkway across the alley. The walkway led directly into the establishment’s Circle. And as the theatre catered not only to the wealthiest of London’s society but to anyone who had a the price of a ticket, it would not have been unusual for Society bucks, the theatre’s thespians and crew, and even the lowest of London’s citizens to rub elbows at The Golden Lion. Some well-known patrons of The Golden Lion include Napoleon III and Oscar Wilde.

Among The St. James’ later attendees were Queen Victoria and Prince Albert and Edward VII and Queen Alexandra. Interesting as one of the later managers of the theatre was the actress Lillie Langtry, Edward VII’s mistress. The last managers of the theatre were Sir Lawrence Olivier and Vivian Leigh. They took over in 1950, but unfortunately a developer obtained the freehold on the building and after an extended public battle that ranged from the newspapers to the Houses of Parliament the theatre closed for the last time in 1957. The theatre was demolished as was the walkway between it and The Golden Lion. 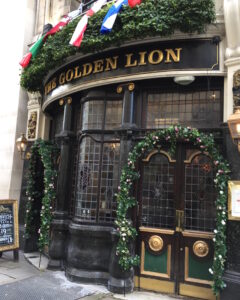 The pub, however, has endured. Nestled amongst large, cold, modern architecture The Golden Lion is a step back in time. The upstairs theatre bar is a monument to the St. James’ Theatre decorated with photos, clippings, and posters from the theatre’s past. 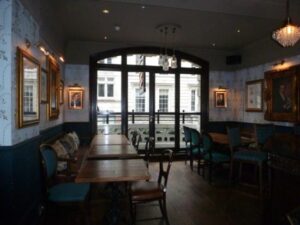 The interior has changed very little from the early Victorian Era. And the pub even comes with its own ghost, a barmaid murdered there in the early 19th century is said to prowl the stairs to the theatre bar in search of her murderer. 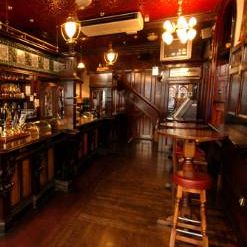 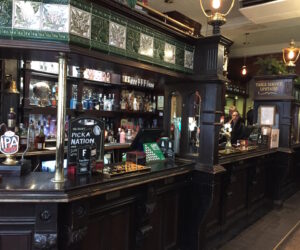