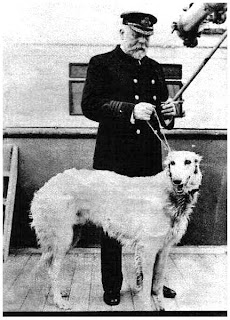 Today, on the anniversary of the sinking of the H.M.S. Titanic, we remember it’s canine passengers. I found the picture above on Pinterest, with the following caption: “Captain Edward Smith of the Titanic and his beautiful Borzoi which was saved.” After re-pinning it, I’d experience a meloncholy pang every time my eye fell upon the photo as I scrolled through my board. Finally, I decided to find out more about the Captain’s dog and turned to the internet for a little instant research gratification. It transpires that others had taken an interest in the Titanic’s four legged passengers, as I found a wealth of material on the subject. I soon discovered that there were thirteen dogs onboard the Titanic, not including the dog pictured above, which was in fact a Russian Wolfhound. From Today.com’s website –

“One photo shows the Titanic’s captain, Captain Smith, holding a Russian wolfhound called Ben, named for industrialist Benjamin Guggenheim, who gave the captain the dog as a gift for his daughter. But Ben never made the journey, as he disembarked before the ship sailed.”

Assuming that you, like myself, would like to know more about the Titanic dogs, you may follow this link for an article I found on the Psychology Today website written by Stanley Coren, Ph.D., F.R.S.C.,  a professor of psychology at the University of British Columbia. It’s an excellent summary of events.

You can then click here to read the full Today.com article about a past exhibition at the Widener University Art Gallery, in Chester, Pa. that focused on the animals onboard the Titanic.

2 thoughts on “The Titanic’s Canine Passengers”