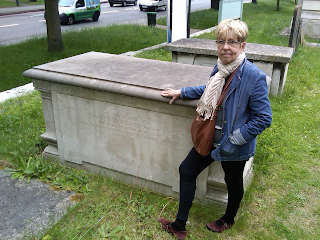 Jo Manning at the tomb of Johann Zoffany and some of his family members, St Anne’s Church, Kew, on a very cold and very grey day at the end of May 2012. (I am wearing 5 layers of clothing.) Nearby is the tomb of Thomas Gainsborough who, born six years before Zoffany, predeceased him by twenty-two years. The tomb was restored in 2008.

I’d always considered Johann Zoffany to be . . . well, why not say it:  boring. Yes, boring. All those courtly paintings of royals and assorted aristocratic or rich mercantile families and groups. He had to be as ho-hum as his subjects, no? Well, how wrong can someone be? Terribly wrong, as I was to find out. The man had some interesting aspects to his persona, not all of them admirable, but…ho-hum, he was not! His life fit right into the scandal-ridden 18th century.

Johann Zoffany was one of the first of the 18th century artists I came across in my researching of the London art scene a few decades ago.  He was competent enough, but his paintings seemed just that, competent, not too exciting.  A good man with the brush, for sure, but, really, his subjects? Let me take you with me on my journey to find who the man was behind the prolific and successful painter, the real Johann Zoffany, and this, only because the Royal Academy of Art has just had a major exhibit of sixty of his most important works.

Zoffany’s former home at 65 Strand-on-the-Green, London, right on and across the river from Kew. A blue plaque is affixed between the 2nd and third windows, at the level above the front door. This is a lovely area, but one subject to major flooding when the river rises. Zoffany at one time owned several other houses on either side of Number 65…

Though among the founding members of the Royal Academy, the group organized in 1768 at the expressed wish of King George III, a group which very soon became the premier association of artists in Britain, Zoffany’s been generally overlooked among the artists in that august body. In the last three years, however, three major and all-encompassing books on him have been published, the last two in 2011.

Born in Germany, near Frankfurt, his original surname was spelled Zauffaly. Like his fellow academician John Hoppner (a portraitist also of German descent), he is not usually remembered in the pantheon of the best-known of the Georgian painters. You can be forgiven for not recognizing his name.

The sad fact for perfectly good and talent artists like Zoffany and Hoppner (and so many others during that time) was that the 18th century art world was dominated by the affable friend-to-all Sir Joshua Reynolds (first president of the Royal Academy, a favorite of royal and aristocratic society), and his contemporary and rival, Thomas Gainsborough. Not only were these two artists favored and favorites because of their talent, but because they gained fame by painting the day’s celebrities – the rich, the heroic, the notorious, the beautiful, and the very colorful – becoming household as well as society names.  Reynolds was, in addition, a workaholic with so many commissions he had to employ a stable of assistants to paint in background and even costume.  He and Gainsborough were the rock stars of the period, the go-to portraitists for high society, i.e., those aristocrats who comprised the ton.

It was difficult to compete in the same arena as those two artistic giants.  George Romney tried, and he did have his followers, but no one at that time was to equal the fame of Reynolds or Gainsborough, fame that endures to the present day. One critic opined that Zoffany was perhaps too German, too peripatetic, and too mercurial, to be taken seriously. Strange comments, but there might be something there. The German artists had their own clique within the RA clique, and Zoffany was definitely a wanderer who spent a lot of time away, from Germany to England, to Italy (a lot of time in Florence), to India, then back again to England. Some Georgian artists never left England, or, if they did go to Italy to study art, did so not more than once.  Zoffany was all over the place.  Peripatetic, indeed.

And the “mercurial” comment… I think it implies that there was more to him than one suspected.  Like quicksilver, he was hard to pin down, more in his personal life, perhaps, than in his painting life. That is, just when you thought you knew him…he was not what he seemed. This can confuse critics, as it certainly did me.

Worse than the fate of the male artists who tried to compete were the many excellent female artists of the day, who fell through the proverbial cracks and are still little known – if not entirely unknown — to historians. There were thousands of good artists in Britain, a good number of whom had trained on the continent (Italy, in particular), but not all made money; some were quite destitute. Painters not that successful competing in London who were intent on increasing their fortunes went on to pursue commissions in India, working for the nabobs (also spelled nawabs), the British and European traders who’d become millionaires, and the Indian princely classes. Zoffany, in fact, lived in Lucknow, India, for about two years at the same time his friend and colleague the miniaturist Ozias Humphry went there, residing within a wide circle of European nawabs. In all, his stay in India totaled some five years.
Of the Impey family group portrait above, Judith Flanders commented in her recent Seven magazine review:

“In India he shows us a world where the Victorian stratification of society into ‘European’ and ‘native’ remain in the future, and images such as The Impey Family show how Indian and British cultures intermixed, as the small Impey daughter, in Indian dress, dances barefoot to the accompaniment of Indian musicians, applauded by her watching father. In other paintings European sitters clutch hookahs, or weave Indian fabrics into their headdresses. It is always through these objects, through their possessions, that   Zoffany’s sitters speak, to their own world and to ours today.”

If Zoffany is known at all, it is for paintings like this, of royals and wealthy families.  His canvases are filled with figures – and he is a nonpareil figurative painter – but gazing upon one too many of these works – dubbed conversazione, or “conversation pieces”, aka informal group portraits — can become yawn-inducing. Above are the six members of the amateur musical Gore family and the professional musician family, the Sharps (I swear, that is actually their surname, Sharp), below, set pieces showing both families’ most treasured possessions, their musical instruments.

Critics have dubbed Zoffany a master of this painting type, a genre that developed on the continent and came to Britain in the first decades of the 18th century.  These set “conversation pieces” have their admirers and detractors but no one can deny that these paintings are not technically well painted, the work of a master painter skilled in group portraiture. He also painted individual portraits of King George III and of Queen Charlotte (flattering both of them immensely), portraits which are not terribly memorable (see below), and tend towards (as one critic put it) the “homey”: 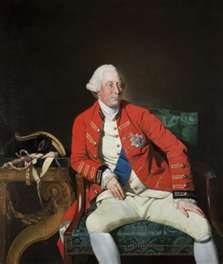 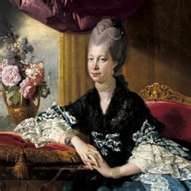 King George III could not be more relaxed in this portrait, legs splayed, arms relaxed. Queen Charlotte could have been flattered a bit more by the artist in her portrait; alas, she was not a handsome woman. Below is a delightful group portrait showing the queen with some of her children, her brothers, and a nursemaid hovering in the background, also tending to the “homey,” again, not terribly exciting, but competently executed.