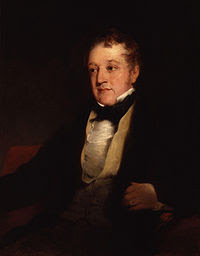 William Huskisson PC (11 March 1770 – 15 September 1830) was a British statesman, financier, and Member of Parliament for several constituencies, including Liverpool. He is best known today, however, as the world’s first widely reported railway casualty –  he was run over by George Stephenson’s locomotive engine Rocket.

Huskisson entered the cabinet in April 1822 when Lord Liverpool appointed him as President of the Board of Trade. The following year Huskisson became MP for Liverpool. Huskisson worked closely with the merchants from the city and soon developed a reputation as the leading representative of mercantile interests in Parliament. This was reflected in the drafting and passing of several new bills that related to trade, including the Merchant Vessels’ Apprenticeship Act and the Registration of Ships Act. Huskisson also took measures towards a policy of free trade. He reduced duties on cotton, sugar, glass, paper, bottles, copper, zinc and lead.

Although Huskisson admitted in debate that he was having doubts about duties on corn, he advocated a delay in their repeal. He finally introduced new measures to reform the Corn Laws in 1826 but the bill was abandoned after the opposition of the Duke of Wellington and other leading Tories in the House of Lords.

When the Duke of Wellington became Prime Minister in 1828, Huskisson refused to serve under him and resigned from office. Huskisson became unpopular with some members of the Tory Party when he made a speech in the House of Commons claiming that Wellington had forced him to leave the government. 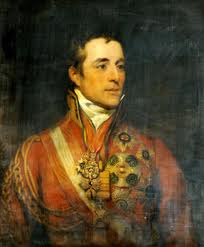 Two years later, both the Duke of Wellington and Huskisson were among the celebrities invited to the opening of the Liverpool and Manchester Railway. At 10.40 a.m. on September 15, 1830, eight locomotives drawing carriages designed after the fashion of stage coaches, and containing 732 people, left the mouth of the Great Tunnel at Liverpool to go to Manchester, the thirty mile route being lined with fully half a million people. On the north line was a gorgeous, circus-like carriage whose principal occupant was the Duke of Wellington. In front of it was a carriage containing a band. The other seven trains were on the south line. At Eccles, seventeen miles from Liverpool, it was planned that the procession should stop for the engines to take in water, and the printed programme specially requested that guests should not leave their carriages.

However, several members of the Duke’s party stepped onto the trackside and Huskisson went forward to greet the Duke. As Huskisson was exiting his car, the locomotive Rocket approached on the parallel track. It appeared afterwards that the driver shut off steam when he saw people on the line. Prince Esterhazy and others managed to jump into the Duke’s carriage. Mr. Huskisson dashed forward in order to go in front of the carriages on the south line, only to find his way barred by a steep bank. “Get in, get in,” shouted the Duke. Huskisson opened a carriage door just as the Rocket came along and struck it, forcing Huskisson off balance and under its wheels. His leg was horrifically mangled. Unfortunately, Mrs. Huskisson was a witness to the accident, as was the Duke’s intimate friend, Mrs. Arbuthnot, who was with him on the journey.

The wounded Huskisson was taken by a train (driven by George Stephenson himself) with Dr. Brandreth, who had been fetched from the rear of the procession, his wife, and others to Eccles, where he died at 9 p.m. Understandably, the Duke was devastated and it was only through vigorous persuasion by many people that he continued on to Manchester as planned, lest he disappoint the crowds there awaiting his arrival. The Duke was not to travel by train again until 1843, when he accompanied Queen Victoria on the London and South Western.

Jack Calcraft has been at the opening of the Liverpool rail road, and was an eye witness of Huskisson’s horrible death. About nine or ten of the passengers in the Duke’s car had got out to look about them, whilst the car stopt [sic]. Calcraft was one, Huskisson another, Esterhazy, Bill Holmes, Birch and others. When the other locomotive was seen coming up to pass them, there was a general shout from those within the Duke’s car to those without it, to get in. Both Holmes and Birch were unable to get up in time, but they stuck fast to its sides, and the other engine did not touch them. Esterhazy being light, was pulled in by force. Huskisson was feeble in his legs, and appears to have lost his head, as he did his life. Calcraft tells me that Huskisson’s long confinement in St George’s Chapel at the king’s funeral brought on a complaint that Taylor is so afraid of, and that made some severe surgical operation necessary, the effect of which had been, according to what he told Calcraft, to paralyse, as it were one leg and thigh. This, no doubt, must have increased, if it did not create, his danger and [caused him to] lose his life. He had written to say his health would not let him come, and his arrival was unexpected. Calcraft saw the meeting between him and the Duke, and saw them shake hands a very short time before Huskisson’s death. The latter event must be followed by important political consequences. The Canning faction has lost its corner stone and the Duke’s government one of its most formidable opponents. Huskisson, too, once out of the way, Palmerston, Melbourne, the Grants and Co. may make it up with the Beau [Wellington]. 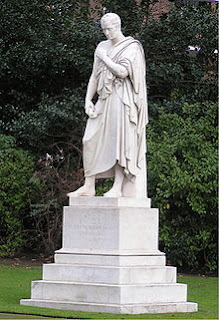 Oddly, Huskisson had been accident-prone his whole life and had in the past broken his arm three separate times – by falling from his horse, from his carriage and
from his bed.
This statue to Huskisson stands in Pimlico Gardens, London. The artist is John Gibson, a descendant of William’s half-brother, Thomas Huskisson.