The view above is a 1935 painting of Wilton House by Rex Whistler (1905-1944).  Wilton House, near Salisbury in Wiltshire is renowned for its architecture, interiors, treasured artworks, and all the elegancies associated with the most distinguished of Britain’s stately homes. And, like some of the others, it is frequently the scene of major filming for cinema and television. The South Façade is the location of the State Apartments created by James Wyatt in the early 19th century, replacing the 17th century arrangement of rooms by Architect Inigo Jones (1573-1665) and his assistant Isaac de Caux and later altered by Webb.

Above, Wilton’s Double Cube Room plays Buckingham Palace in episodes of The Crown on Netflix. Below, it doubles for Pemberley in the 2005 version of Pride and Prejudice.

Although there is dispute over how much of the south wing of Wilton House can be attributed to Inigo Jones (1573-1652), we know that the Double Cube Room and the Single Cube Room along with the other state rooms were finished by John Webb (1611-1672) in the mid-17th century. Various changes have been made over the years, but the earls and countesses have maintained most of the magnificence designed by Jones and Webb. Below, two views of The Single Cube Room, 30x30x30 feet in dimension, a perfect cube.

The portrait over the fireplace is Henriette de Querouaille, Countess of Pembroke, wife of Philip, 7th Earl, and sister of Louise, mistress of Charles II and mother of the 1st Duke of Richmond. The portrait was painted by Sir Peter Lely (1618-1680).

The Double Cube Room, below, is the size of two 30-foot cubes, a technique Inigo Jones used in several buildings. Much of the furniture in the two rooms is by William Kent or Thomas Chippendale.

The Double Cube Room, originally called The King’s Great Room, is sixty feet long by thirty feet wide and thirty feet high. The magnificence of the room defies description! The ceiling decoration is clearly in the baroque style.

The central ceiling panels show three views of the legend of Perseus painted by Emmanuel de Critz. The twelve-foot coving was decorated with swags, urns, and putti by Edward Pierce, a frequent collaborator with Architect Inigo Jones. They are dated c.1653

Below, the painting for which the room was designed, the magnificent family portrait, c. 1635, by Anthony Van Dyck of the 4th Earl of Pembroke and his family which hangs at one end of the Double Cube Rooms. At 17 feet wide, it is the largest portrait by Van Dyck (1599-1641) in England. Numerous other portraits by Van Dyck and his studio adorn the walls.

The State Rooms served as Allied headquarters during World War II; the D-Day landing in Normandy was planned here.

Below, the Great Ante Room, added in the 18th century, is sometimes thought of as James Wyatt’s homage to Inigo Jones.

The King’s Bed Chamber and King’s Closet were redecorated in the 18th c. for the visit of George III and Queen Charlotte in 1778. Many priceless masterworks hang on the walls. 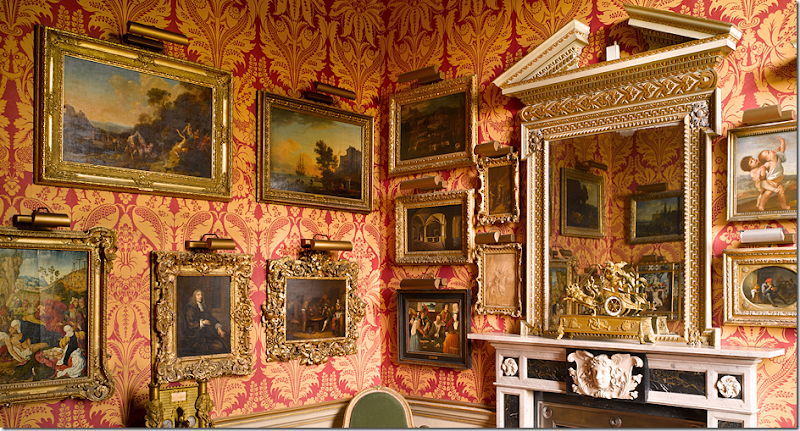 The house is replete with great works of art in multiple media. Many members of the Herbert family, the Earls of Pembroke, were avid collectors.

At the currently-used entrance on the North Front, visitors arrive in the Front Hall designed by James Wyatt in 1809. Who better to greet us than The Bard himself. According to the Guidebook, the statue “recalls the 2nd Earl’s and his wife Mary Sidney’s patronage of literary men and of Shakespeare above all.”

Numerous other rooms, more than one could count, are worthy of attention. I particularly liked the Large Smoking Room, redecorated by the current Lady Pembroke in 2017. The picture above was taken before the new color scheme was installed. Below is the yellow moiréed silk now on the walls. The huge bookcase, from the workshops of Chippendale, is a temptation I could hardly survive. What is tucked away inside? Imagine how much work you could get done here — once you had examined the art and furniture and gazed out the windows for a month or two!

I have visited Wilton House several times, but I will never get enough of this wonderful house and grounds…on the edge of the city of Salisbury in Wiltshire.

If you’d like to see some of England’s stately homes in person, visit our Number One London Tours site to see all of our upcoming country house tours and their itineraries.