There are many factors that determine a city’s longevity, anyone who enjoys the works of Edward Rutherford or Ken Follett knows that – having an attraction that draws people in, a cathedral, a market, a fair, being located on a trade route or a river, being a capital or a terminus. Perhaps most important of all, the city that lasts is the city that morphs with the times, it continues to grow and change to meet the needs of the populous, and to take advantage of improving technologies. London has proved time and again that it is such a city.

One of the exciting aspects to building the world inhabited by the 4 exiled princes of Kuban in my series The Royals of Kuban, was using the changing structure of London in the 1820s as a backdrop for their adventures. One neighborhood featured in the series is the neighborhood of Soho, located west of St. Giles. It has an interesting history that runs parallel to the history of St. James which was being constructed at the same time. For us, looking back through history, St. James is perhaps the better known, historically. Today, I want to share a little about the perhaps lesser known historical neighborhood of Soho, not the trendy bohemian capital of west-end London that we are familiar with today, but how it evolved in the years since it’s inception in the 1670s and the intervening centuries.

So, let’s get started with the ominous words, “In the beginning.”

In the beginning, (that being the 1670s), Soho was developed with the vision of making an upscale neighborhood peopled by the aristocracy. The area was divided into three squares, Golden (which was originally referred to as Gelding Close), Leicester and Soho.  Leicester Square is featured in the painting to the left as it appeared in 1800. And yes, the aristocrats came. Some of those who lived in Soho included The Earl of Fauconberg who resided there from 1683-1700, the Countess of Carlisle, and the Duke of Monmouth among others.  Let’s mention the ‘among others’ piece. It wasn’t only nobility who came. Golden Square, for instance, not only saw peers living there but also army officers and foreign ambassadors. 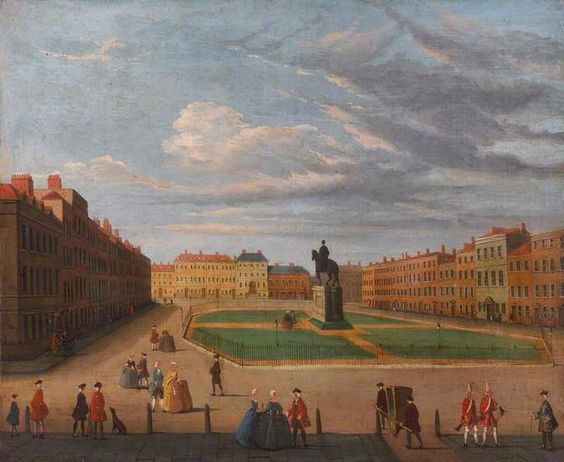 Historians agree that an elite patronage of the neighborhood barely survives fifty years, and in fact, it is easy to argue the neighborhood never had a chance of sustaining a ‘Mayfair-esque’ longevity as a gathering place for the wealthy.

Three factors played a role in preventing Soho from becoming a  wealthy watering hole.  First, what any realtor has known for ages: location, location, location. Remember that other area being developed? St. James? by the 1720s,  map drawings of London highlight the West End as a focal point of the city with close attention being paid to the St. James Court.  An example of this is shown below in the reproduction of cartographer, John Kip’s panorama of London. Sure, Soho is in the West End, but it’s St. James that gets the attention on the map.  Why? That’s where the royal family was and where royal business was conducted until the reign of Queen Victoria. Many peers began to feel Soho was simply too far from the palace. 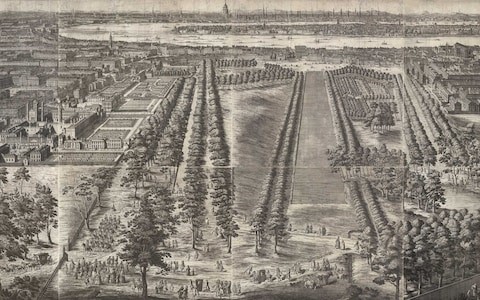 Second, a mish-mash of landlords. Soho was, in some aspects, a wild, wild west. There was no single landlord overseeing the land grants and the quality of development as there was, for example, in Mayfair where the Grosvenor family held control over who and what built in the area. As a result, there were varying degrees of quality and purpose to the homes and businesses that sprung up in Soho. That’s, right, businesses. Residences were built next door to medical clinics, and people like to live close to their work. It’s not a leap of logic to understand who moves in next—doctors for instance who want to be close to their practices. But they can’t afford the housing styles of the wealthy. You see where this is going, right?

Third, there’s not only a wide variety of landlords developing the area, there’s a wide variety of tenants. Not only a middle class physicians and tradesmen, but also immigrants. In the 1670s, Greek immigrants congregated in Soho after being chased out of Turkey by the Ottoman invasion. They are followed in the 1680s by French Hugenots escaping persecution.  One historian notes that by 1711 over a quarter of the population of St. Anne’s Parish (the parish serving Soho) was French. To give you a sense of that, the parish records attests to serving a population of 8,000 people. This is not an isolated occurrence. The trend continues throughout the 1800s as nationalist revolutions rise and fall throughout Europe in the wake of Napoleon’s defeat.  For instance, Germans, Italians and Hungarians flock to Soho in the aftermath of failed revolts in 1848. It is by no mistake that the blog, Hidden London, refers to the Soho of the twenty-first century as a “longtime centre of alternative culture.”

By the time the Kuban princes arrive in London, English peers had long since decamped from Soho. The  Soho of the 1820s had become a melting pot of immigrants who worked as artisans, clerks, musicians and assistants to the wealthy, and  aristocrats fleeing homelands and attempting to live in genteel poverty while clinging to their aristocratic pride. To keep the flavors of their various homelands alive, many opened up bistros and small eateries where the working man and woman could grab a bite to eat on the go that reminded them of home. Eventually, the idea of such bistros gained wide appeal in London as the concept of ‘eating out’ caught on and the West End came to Soho for a taste of Europe. 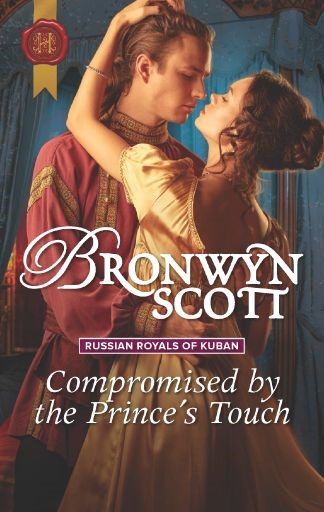 The other Soho legacy left to the people of the 1820s were the homes built on big lots for the wealthy who had moved on. This is what appeals to hero, Prince Nikolay Baklanov, formerly of his majesty’s cavalry in Kuban in “Compromised by the Prince’s Touch.”  He walks the neighborhood of Soho looking for a house and a lot big enough to him to establish his own riding school. By the 1820s, big lots with their own mews and riding houses were at a premium in London. But Soho has some remaining from its glory days.  Leicester Square is where Nikolay finds his perfect property.

I hope you’ve enjoyed this look at Soho! For more about the Royals of Kuban, you can visit my blog at www.bronwynwriting@blogspot.com