How many times has Hester Davenport’s name passed my lips since we lost her on  September 23rd, 2013 – five years ago? Too many to count, as we at Number One London have so many memories of our beloved friend, sharing them often. If we’re not speaking of Hester amongst ourselves – Kristine, Victoria and Jo Manning – we’re sharing stories of Hester with other friends and acquaintances. She is never far from our hearts. 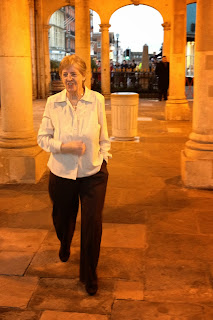 Victoria, here. I find it difficult to express my sense of loss at the news of Hester’s passing. We will miss her terribly. Wherever she is, I am sure she is organizing everything with her gentle touch and genial good humor.

Kristine and I (and Kristine’s daughter Brooke) thrust ourselves upon Hester one day in June, 2010, full of excitement for our upcoming trip to see the reenactment at the 195th anniversary of the Battle of Waterloo.  She had invited us to spend the day with her at Windsor, but little were we prepared for the depth of her welcome and her plans for our visit.  We started at the Windsor Guildhall, where she showed us around the upper floors. Then we went into the lower level where the archives were in the process of being moved to make way for the new museum that Hester masterminded.

Hester thoroughly charmed and surprised us by showing us the accounts of the news of the Waterloo victory as they were received and celebrated, as reported in the Windsor and Eton Express.  The original newspapers had been bookmarked for us and there probably had never been two more thrilled readers of the Windsor Gazette than Kristine and I were. 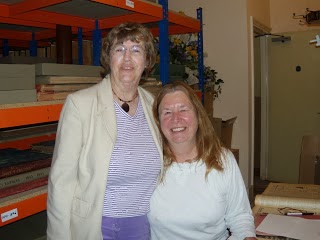 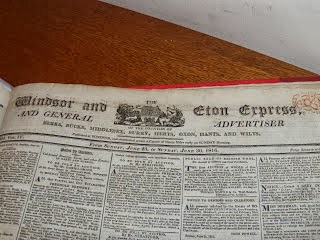 We read about how and when the news was received and the celebratory plans for the royal family and the community.  It was such a thoughtful thing for Hester to do, and greatly added to our enjoyment of our Waterloo visit.  After giving us the latest 195-year-old news, Hester asked us if we’d like to go see the Queen.
That is a QUESTION???  We jumped at the chance.  Off we hiked to the drive from the Castle up the long walk toward Ascot.  Hester told us that the royals went most of the way in autos then changed to open carriages to enter the race course.  A small group had gathered to await the parade of black limos, and we had a glimpse of Herself as she passed by. 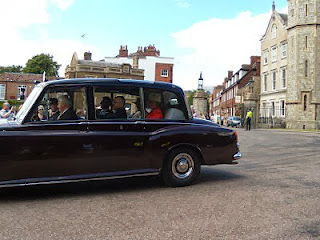 We went on to lunch in a quaint cobbled street-café, all the while chattering a mile a minute, telling each other about various projects underway, observing the locals and tourists, and basking in Hester’s erudite presence.  Of course we talked about the royals, Waterloo, the new Museum about to be created in the Guildhall, then on to persons of interest to all of us, celebrities such as Mary Robinson,  Fanny Burney, Mrs. Delaney, Dr. Johnson, and Queen Victoria (and Prince Albert).  Exactly the kind of celebrity small talk everyone enjoys, right? Well, at least those of us who indulge in the fantasy of  living in the 18th and 19th centuries.
Eventually we moseyed off to the Castle and did the tour.  We were certain Hester had walked that route a million times but she gallantly assured us she loved it every time.  Every step of the way, she told us  “inside” stories, all about the fire in 1992 and what was restored.  And how! 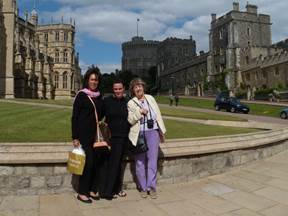 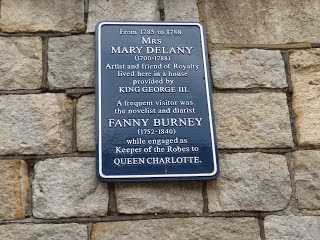 On other visits to Windsor, Hester showed us all around the new museum, where she had also welcomed Her Majesty (see below).  She always had the most interesting details to impart without in any way taking credit for all the things she had accomplished.  As head of Dr. Johnson’s House, as an excellent biographer, and as the head of the Frances Burney Society (in addition to many other endeavors and awards), Hester had a role in the most esteemed of British scholarly organizations. But she always had time to chat with amateurs like us.  So we will greatly miss a wonderful friend and favorite companion. All our best to her dear husband, Tony, gardener extraordinaire, and to their daughters.  RIP, Hester. 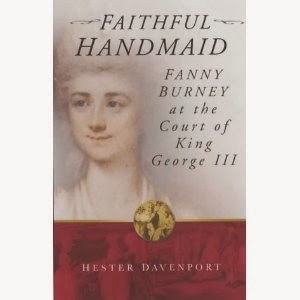 Kristine here, still unable to process the fact that Hester is gone. Hester and Windsor will forever be linked in my heart. So many memories and so many good times, most arranged by Hester, who was a respected historian, accomplished writer and also very funny. Below is a photo taken by Victoria of Hester and I looking at the grave of Mary Robinson in Windsor, which Hester tended faithfully. 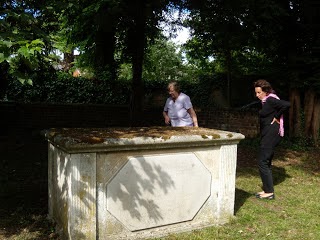 You won’t believe me, but on several occasions Hester related the funniest stories about Mary’s grave to Jo, Victoria and myself. I think my favorite was the time that Hester was showing a group Mary’s grave and while she was giving her talk, became distracted by the fact that Mary’s grave boasted several fresh sprays of flowers. Who could have left them? Where had they come from? It wasn’t till she’d finished that Hester realized she’d taken the group to the wrong grave. 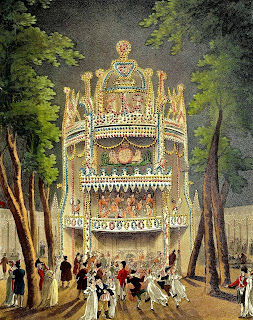 I remember the email we received from Hester telling us that she was doing a truly daring thing – bidding on an original print of Rowlandson’s Vauxhall Pleasure Gardens, above. A broker would be phoning in her bids during the live auction. We girls kept our fingers crossed across the pond and were dead chuffed to learn that Hester had submitted the winning bid. Next time I was over, of course I saw the print up close and in person. What a treat. 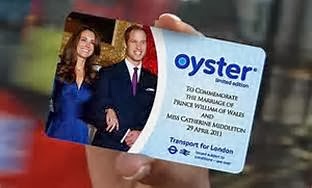 Hester always good naturedly carried out my commissions with patience, like the time I mailed her a twenty pound note and asked her to buy me the Oyster card issued to commemorate the wedding of William and Kate, which she purchased at Windsor station and mailed to me. (I’m still using it) 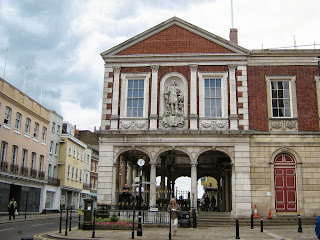 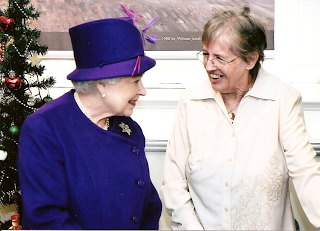 Of course, the Guildhall figures largely in my memories of Hester. And the Queen. Hester and the Queen – could anything be more perfect?

As most of you know, Hubby and I recently spent two fabulous days with Hester when we were over in January. Firstly, Hester drove us to Oatlands, now a hotel, but once the home of Frederica, Duchess of York. The three of us had tea and then Hester helped me to search the grounds and find Freddy’s pet cemetery. Below is a photo of Hubby, Hester and some guy they picked up at Hampton Court, where we went afterwards. Next day, Hester and I toured the kitchens at Windsor Castle together, had lunch and took a stroll by the river. 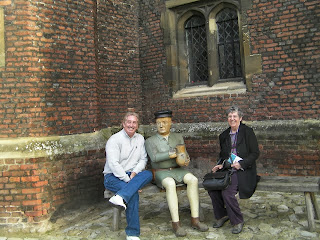 Hester was to have spoken to our group when Victoria and I go over to Windsor in September 2014 for the Wellington Tour.  How everyone in our group would have enjoyed meeting Hester – and how much fun we’d have had.

I am convinced that Hester is now spending her days in a well appointed drawing room with the likes of Brummell, Fanny Burney, Mrs. Fitzherbert, the Duke of Wellington and the Duchess of York. I only pray that she’s keeping my seat warm.

The last time I saw my dear friend and colleague Hester Davenport was when I waved goodbye to her as she drove back to Old Windsor after dropping me off at the railroad station in Windsor. It had been a glorious day, but all days with Hester were glorious, despite the often mercurial English weather.

We’d had tea and pastries – the biscuits a culinary treat – in the back garden with her husband Tony, enjoying the spring flowers and exquisite green swathe of lawn. I was sorry to have to leave, as I always was, because good company is rare anywhere in the world and theirs was sublime.

Hester, after her long and arduous string of medical treatments, looked so well! And she was chipper,  too, looking forward to her next adventures in writing and editing. She was skilled in both, such a talent. Her prose was smooth and readable, eminently so.

We “met” online in 2005, when my publisher forwarded to me Hester’s comments on the biography I wrote on the 18th-century courtesan and memoirist Grace Dalrymple Elliott. It’s a small world:  Hester had recently completed a well-researched, beautifully-written biography of Grace Elliott’s rival in love – or what passed for it in the Georgian era amongst the aristocrats and royals – Mary Robinson aka Perdita.

Hester’s remarks about my writing were so very kind…and thoughtful. She took issue with some interpretations I’d made but acknowledged that so much of the conclusions we drew concerning the lives of these ladies were interpretive, at best.  We loved our subjects, those so-called soiled doves so ill-used by wealthy and powerful men…tough women who sometimes triumphed over social adversity but most times did not.

We were thoroughly engrossed in our research and subject matter and it was so delightful to find each other…someone to talk with and reflect and whose company was thoroughly enjoyable. Yes, we most assuredly would have bored the trousers off the majority of people with what we talked about, so being together was a treat beyond the ken of most. We also bonded over biographers who came after us and used our research, claiming it to be their own. We each had a specific bête-noire!

We actually met face-to-face in early 2006, over a delicious meal and white wine at the restaurant atop the National Portrait Gallery. The talking was even more delicious than what we ate or drank  Hester was witty…and wise…and a wonderful companion.

We always had something to discuss, somewhere to go – museum exhibition (the Thomas Lawrence show stands out here), Jane Austen’s haunts – the memories are fabulous and Hester’s energy was unflagging as she drove me around the English countryside. I will also never forget the wonderful day we had at Windsor Castle with my two eldest granddaughters, Zoe and Esme Winterbotham. She introduced us to Windsor Castle – what a superb guide! – and the girls introduced her to Wagamama. (A restaurant she said she very much enjoyed getting to know.)

A highlight of our day at Windsor was our side visit to St George’s Chapel, where Hester thoroughly scandalized the docents  — and delighted me and the girls – by stomping fiercely on the earthly remains of King Henry VIII, an historical character we found revolting to the max. I will never forget that scene.

I miss her. I will always miss her, although I continue to have an ongoing dialogue with her in my mind. I truly believe that people are only really gone when you forget them, when memories disappear. I will never forget my kind, wise, wonderful, clever, witty, darling friend Hester Davenport…and I will bless her memory so long as I live. 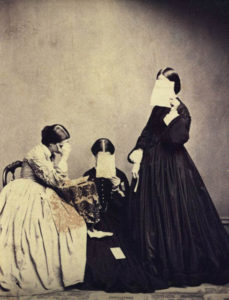