Skip to content
Continuing the Accounts of the Death and Burial of Queen Caroline, August 1821

Queen Caroline had long been a popular figure with the masses. During her funeral procession, riots broke out in the London streets. The following account was published in the Manchester Guardian on 18 August 1821:

“Before six o’clock a crowd assembled at Hyde Park Corner. The anxiety of the people as to the course the funeral procession [for Caroline of Brunswick] would take was here most strikingly displayed. The crowd were unwilling to depart from a place where there was a favourable chance of joining or viewing the procession; but there was the greatest agitation and alarm lest it should pass another way.

“The procession reached Kensington at half past nine. It was after eleven that it moved on into Hyde Park, and an attempt was made to pass, but this failed, for the people, apprehensive that the hearse would not pass through the City, shut the gates.

“About twelve o’clock the procession entered the Park, and during its passage through it a scene of confusion and outrage ensued of which the annals of this or any other Christian country can present few parallels. Vast numbers of persons on foot and on horseback passed with great speed along Park Lane. Their object was suspected by the Guards to be to reach that gate before them, with the view of meeting the procession, and forcing it to turn back. To prevent this, the Guards galloped through the Park to gain Cumberland Gate before them. The procession moved at a very quick pace through the Park. Suddenly, it halted, and it was understood that the people had closed the gates. It became necessary to force a way for the procession through whatever impediments might present themselves. The people were equally bent on turning the procession, and forcing it into the route of the city. Here a contest arose, and here, we deeply regret to say, blood was shed!

“Some stones and mud were thrown at the military, and a magistrate being present, the soldiers were sanctioned in firing their pistols and carbines at the unarmed crowd. Screams of terror were heard in every direction. The number of shots fired was not less than forty or fifty. So completely did the soldiery appear at this period to have lost the good temper and forbearance they previously evinced, that they fired shots in the direction in which the procession was moving. Immediately upon the cessation of the firing, the latter part of the procession joined the rest of the funeral train. The rain, which had lately abated, again poured in torrents, as the procession advanced.”

Harriet Arbuthnot, diarist and close friend of the Duke of Wellington wrote in her Journal:

“August 1821: 15th Most disgraceful riots have taken place in London at the Queen’s funeral. The people were dissatisfied at the procession being settled not to go thro’ the City and actually, by force and violence, by breaking up the roads and blocking them with carts and carriages, forced it into the City. One man was killed and many wounded, and nothing prevented a dreadful slaughter but the exemplary patience and forbearance of the military…”

A few days later, she wrote: ” 21st – Mr. Arbuthnot writes me word from London that he thinks all the mischiefs at the Queen’s funeral were caused by Sir Robert Baker’s folly and cowardice, that the Riot Act was not read and the soldiers fired without orders; but, after all, men with arms in their hands cannot be expected to stand and be pelted to death without retaliating. Inquests are sitting upon the two men who were killed, and nothing ever was so absurd as the proceedings. Sheriff Waithman acts as Counsel for the dead men and treats the Coroner and everybody with the utmost impertinence; the Life Guards were paraded today that the witnesses might try and identify the man who fired, but all picked out different people and most of them men who were not on duty, so that it is quite a farce…”

On the 30th of August, Mrs. Arbuthnot wrote: “…There was a great riot at the Knightsbridge barracks at the funeral of the two men who were killed on the day of the Queen’s funeral.  The people hissed and hooted the soldiers and at last attacked one who was amongst them unarmed. His comrades defended him and a general battle ensured. Nobody was much hurt.”

“Sept. 14 1821:  The Duke of Wellington dined with us and told me that he was quite sure Sir Robert Wilson was at the bottom of whole riot at the Queen’s funeral. The Ministers have evidence that he offered five shillings to the first man who wd break up the roads, and gave beer to the mob to excite them; he also abused one of the soldiers and d—-d him, on which the soldier loaded his pistol and cocked it, which preparation rather alarmed Sir Robert, and he made off. he is to be dismissed the Service as soon as the King returns, and he is expected today. I asked the Duke why he was not tried for treason for obstructing the King’s Highway, but he said people were afraid of appearing as witnesses from the violence of the mob.”

From the Hamburg papers, published September 5, 1821, in The Times:

“Brunswick, August 25:  Yesterday was performed here the funeral ceremony of the entrance and depositing of the body of the late Queen of England, with all the solemnity and attachment to the House of their Princes which characterises the brave Brunswickers….The citizens of Brunswick…drew the car to the church themselves….Immediately behind it followed several hundred merchants and citizens with tapers. Behind the train of the citizens followed the carriages of the English, Alderman Wood, Lord Hood, Lady Hamilton, Austin, etc. and several carriages belonging to persons of this city attached to the House of Brunswick…There were 20,000 persons who followed the royal corpse, and the greatest tranquillity and order prevailed during the whole of the funeral solemnity.  The church was hung with black, and 60 young ladies, all dressed in white with black sashes, received the corpse, and accompanied it, with wax tapers, to the vault. ”

Caroline is buried in the Brunswick royal tomb in the cathedral in Brunswick (in German, Dom St. Blasii et Johannis), a large Lutheran church in the city now known as Braunschweig.

Numerous volumes have been published about the life of Caroline of Brunswick, her trials and tribulations. Below, the 1996 biography by Flora Fraser, published by Knopf. 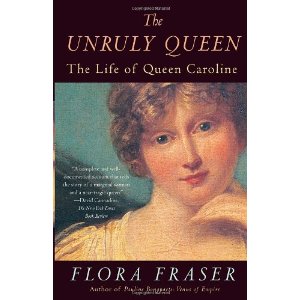 Ms. Fraser’s conclusion (p.466): “[Caroline’s] high-spirited, even reckless, response to her predicament brought her unprecedented liberty, as she confounded the machinations of her husband and of the governments in England and on the Continent to bring her to book. But in the end Caroline’s breathtaking audacity had fatal consequences, contributing to the loss of her daughter, her crown and her life.”