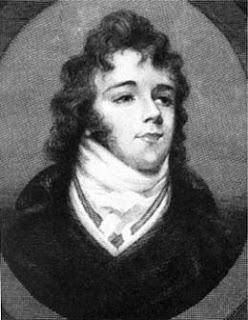 ” A person, my dear, will probably come and speak to us; and if he enters into conversation, be careful to give him a favourable impression of you, for,” and she sunk her voice to a whisper, ‘he is the celebrated Mr. Brummell.”
Life of Beau Brummell by Captain Jesse

Born on 7 June, 1778, Beau Brummell endures as a style icon, a matchless wit and an enigma. Was Brummell a caring friend, as experienced by Frederica, Duchess of York, or a sarcastic louse, as portrayed in the following passage from The Cornhill Magazine –

“Brummell’s rise to social autocracy is the more astounding that he had no sort of family to boast of, and that in his day the fashionable drawingrooms and clubs were jealously closed to upstarts and parvenus. Making every allowance for matchless assurance and extraordinary opportunities turned to excellent account, there must have been much in a man who not only became the ami intime of the Prince of Wales, but secured the attachment of a host of friends who stood by him staunchly when in extremity of adversity. Thackeray knew the world well, and he was right when he said that the world is really very good-natured. For whatever the qualities of Brummell, he had no heart to recommend him; he had nothing of that genuine touch of nature which wins affection irresistibly, and makes all mankind akin. He was frivolous, selfindulgent, and ostentatiously selfish. He could attach himself to the dogs who were helplessly dependent; he could pet a mouse and make friends with a cockatoo; but he was cursed with the superficial wit which loved to wound, and he seldom missed an opportunity of saying some bitter thing. If the smart rankled, so much the better. He swaggered cruelly on the strength of his social ascendency, though, to do him simple justice, he spared the strong as little as the weak. Perhaps there never was a less lovable character than that of the dandy who luxuriated for years on disinterested charity and never altogether exhausted it, although he offered his benefactors the most irritating provocation.”

Perhaps in the end Brummell was just like the rest of us – a complex person who could be, and was, many things to many people. Certainly, the Duchess of York and her brother-in-law, the Prince of Wales, had different views on him. However, one view that seems to be universal is that Brummell was the quintessential dandy – or was he? William Pitt Lennox declared that it was a libel to call Brummell a “Dandy,” since he differed entirely from all that species. “Of all my acquaintances, he was the quietest, plainest, and most unpretending dresser,” Pitt wrote. “Those who remember him in his palmy days will bear testimony to the truth of this assertion; it was the total absence of all peculiarity, and a rigid adherence to the strictest rules of propriety in costume, which gained for him the homage due to his undisputed taste. He eschewed colours, trinkets, and gew-gaws; his clothes were exquisitely made, and, above all, adapted to his person; he put them on well too, but for all this there was no striving for effect—there was an unusual absence of study in his appearance.”

A favorite parlor game played by myself, Victoria Hinshaw and Jo Manning is not Scrabble, Trivial Pursuit or even the Oijua Board. No, our favorite game, especially when we are with new people whose opinions we haven’t heard before, always begins with the same question, “Beau Brummell: Straight, gay, bisexual or A-sexual?” I promise you, coupled with a few glasses of port, a cozy chair and the right people, this question can keep you entertained for hours. Granted, you have to have a group of people with the same mind set, people who have actually heard of Beau Brummell and who know the facts surrounding him, but this is not as difficult as it might seem. Two centuries after his death Brummell is still being written about, as both fact and fiction, not to mention the many films which have portrayed his fascinating, fashionable and foible filled life. 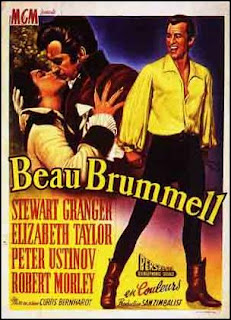 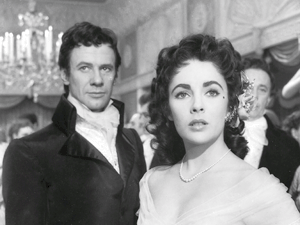 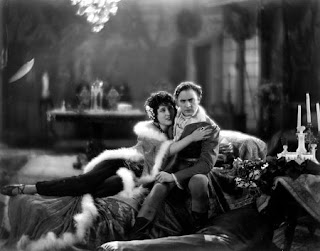 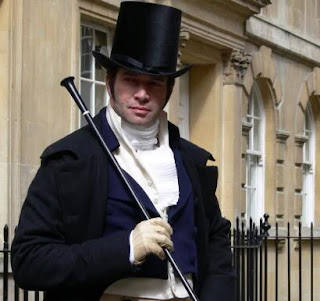 Whether portrayed by John Barrymore, Stewart Granger or
James Purefoy, the Brummell flair always manages to come through. 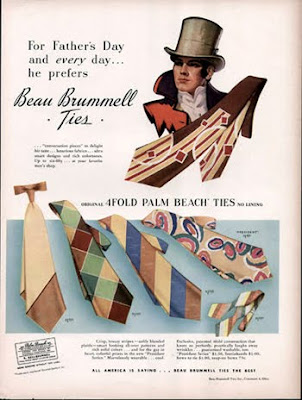 In fact, the Brummell flair is still so powerful, his name still so instantly associated with all things exquisite and fashionable that Brummell, who would be 232 years old today, continues to have his name bandied about in order to sell all manner of goods, including after shave, ties, shirts, suits, watches, razors, early 20th century hand soap dispensers and a Cincinnati office building. 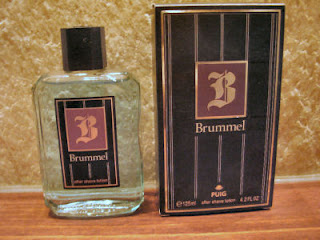 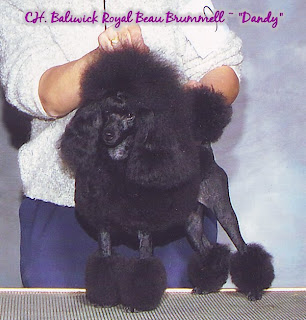 Not to mention a show poodle, which, when you think of it, is infinitely more fitting than a soap dispenser. By the way, there have also been many horses named Beau Brummell – one of them has a race video on YouTube. 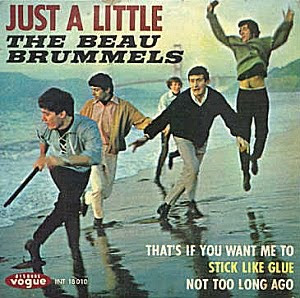 I must say I’ve never heard of Brummell’s having been musicially inclined, though I could be wrong.
And how about . . . . . . . 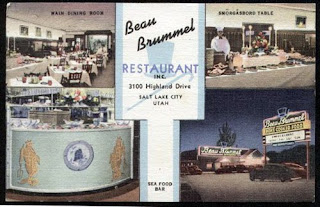 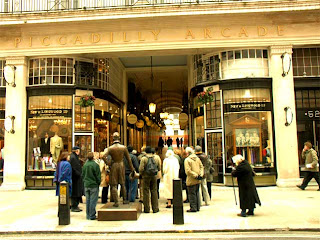 Brummell would be gratified to learn that he can still draw a crowd, as evidenced by this photo of his statue in Jermyn Street.
Brummell was one of the most talked about men of his day and I like to think that, wherever he is now, it amuses him to no end that his name still holds some cachet. And I think it makes him guffaw outright to know that while everyone still recognizes his name – nay uses his name in order to sell all manner of goods – the number of George IV branded items is rather limited. The Duke of York even has more pubs named after him than Prinny does. It’s a shame really – My Fat Friend’s Place would have made a much better name for a restaurant, what?