Skip to content
Victoria H here: I have always had a special feeling for Queen Victoria, obviously because it was the name my father — with his entirely British heritage — chose for me. 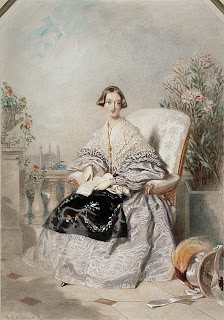 The above view of the Queen in 1838 is one of my favorite portraits. 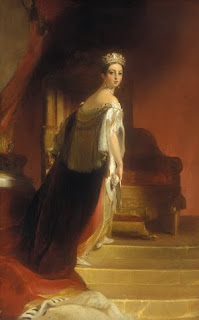 Above, the Queen in her 1838 coronation robes by American artist Thomas Sully (1783–1872). The painting hangs in the Metropolitan Museum of Art in New York City though it has been copied many times and can be found in various configurations many places. 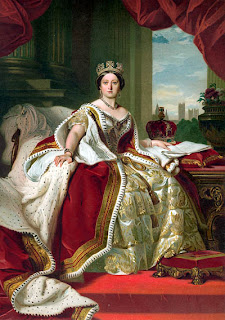 Victoria was Queen until her death in 1901, the longest reign in English history at the time. The Hayter painting is in the National Collection in Britain and a copy of it hangs in the National Portrait Gallery, London.

Victoria’s name became the title of an age characterized by a revolution in industry, transportation, communication, medicine, culture, and, perhaps, family relationships and sexual behavior. At the beginning of her reign, horses and sailing ships provided transportation. At the end of her life, we had dirigibles and the Wright Brothers first flew just a couple of years later.  Wonder what Victoria would have thought of blogging? In celebration of the 200th Anniversary of Queen Victoria’s birth this year, Number One London Tour will be exploring all aspects of the Queen’s life, from her birth at Kensington Palace to her death in 1901 at Osborn House on the Isle of Wight, on our 2019 Queen Victoria Tour. Full details and Tour itinerary can be found here.