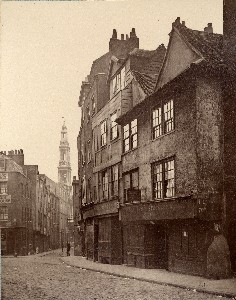 On the 8th of February, 1750, an earthquake was felt in London, followed exactly a month afterwards by a second and severer one, when the bells of the church clocks struck against the chiming-hammers, dogs howled, and fish jumped high out of the water. Horace Walpole, in a letter to Sir Horace Mann, draws a lively picture of the effect created by the event, and we cannot do better than borrow his narration:

“. . . . . as far as earthquakes go towards lowering the price of wonderful commodities, to be sure we are over-stocked. We have had a second, much more violent than the first; and you must not be surprised if, by next post, you hear of a burning mountain springing up in Smithfield. In the night between Wednesday and Thursday last, the earth had a shivering fit between one and two; but so slight that, if no more had followed, I don’t believe it would have been noticed. I had been awake, and had scarce dozed again,—on a sudden I felt my bolster lift my head. I thought somebody was getting from under my bed, but soon found it was a strong earthquake that lasted nearly half a minute, with a violent vibration and great roaring. I got up and found people running into the streets, but saw no mischief done. There has been some; two old houses flung down, several chimnies, and much earthenware. The bells rang in several houses. Admiral Knowles, who has lived long in Jamaica, and felt seven there, says this was more violent than any of them. The wise say, that if we have not rain soon we shall certainly have more. Several people are going out of town, for it has nowhere reached above ten miles from London: they say they are not frightened, but that it is such fine weather, “Lord, one can’t help going into the country!” The only visible effect it has had was in the Ridotto, at which, being the following morning, there were but 400 people.

“A parson who came into White’s the morning after earthquake the first, and heard bets laid on whether it was an earthquake or the blowing up of powder mills, went away exceedingly scandalised, and said, “I protest they are such an impious set of people, that I believe, if the last trumpet was to sound, they would bet puppet-show against judgment!” The excitement grew intense: following the example of Bishops Seeker and Sherlock, the clergy showered down sermons and exhortations, and a country quack sold pills “as good against an earthquake.” (Walpole himself advised anyone who would listen to “take bark”). A crazy Life-guardsman predicted a third and more fatal earthquake at the end of four weeks after the second, and a frantic terror prevailed among all classes as the time drew near.”

On the evening preceding the 5th of April, the roads out of London were crowded with vehicles, spite of an advertisement in the papers threatening the publication “of an exact list of all the nobility and gentry who have left or shall leave this place through fear of another earthquake.” “Earth-quake gowns “—warm gowns to wear while sitting out of doors all night—were in great request with women. Many people sat in coaches all night in Hyde Park, passing away the time with the aid of cards and candles; and Walpole asks his correspondent, ‘What will you think of Lady Catherine Pelham, Lady Frances Arundel, and Lord and Lady Galway, who go this evening to an inn ten miles out of town, where they are to play brag till four o’clock in the morning, and then come back, I suppose, to look for the bones of their husbands and families under the rubbish?’

On the 18th of March in the same year an earthquake was felt at Portsmouth, Southampton, and the Isle of Wight. In April, Cheshire, Flintshire, and Yorkshire were startled in like manner: this was followed by an earthquake in Dorsetshire in May, by another in Somersetshire in July, and in Lincoln-shire in August, the catalogue being completed on the 30th. of September by an earthquake ex-tending through the counties of Suffolk, Leicester, and Northampton.

N.B. The feared third London earthquake did not occur.