It is impossible to imagine the field at the Battle of Waterloo without calling the senses into play. The sights: soldiers clashing swords, horses rearing, men forming squares, columns of smoke from cannon fire. The smells: wet earth, sweat, wet horse and wet leather, cordite and black powder. The sounds: musket fire, swords singing metal on metal, horses neighing, men shouting and, perhaps most identifiable to us in the present day, bugles and trumpets sounding the calls. Amazingly, a few of the instruments that were played on the field of Battle at Waterloo have been preserved and are occasionally still played, like the trumpet above in the collection of the Household Cavalry Museum, which was played by John Edwards on the battlefield.

This field bugle was blown by 16-year-old John Edwards, who was duty trumpeter of the day. It sounded the charge for the Household Brigade which comprised the 1st and 2nd Life Guards, the Royal Horse Guards (the Blues) and the 1st Dragoon Guards.
The other brigade, the Union Brigade, comprised the 1st (Royal) Dragoons, the Royal North British Dragoons (Scots Greys) and the 6th (Inniskilling) Dragoons. They charged a few minutes before the Household Brigade.
The Allied cavalry manoeuvred through the ranks of Allied infantry and charged D’Erlon’s Corps, with its supporting cuirassiers, causing immense damage. Then, rather than turn back having successfully completed their task, they charged on over the French gun batteries. They arrived without support and with exhausted horses deep into the French lines, where they in turn suffered heavy casualties.
Of the 2,500 cavalrymen involved, approximately half were killed or wounded. However, Napoleon had lost the initiative and failed to gain control of the battle. Two French Eagles (battalion colours) were taken.
Trumpet or bugle calls were a vital command system in battles at this time. Shouting and screaming men and horses, the explosions of guns, cannon shells and small arms made verbal communication impossible. The smoke from black powder meant visibility was down to that of a thick fog. The incredible danger from musket balls, sabres, cannon balls and kicking horses made full attention vital. Only the sound of the trumpet was able to communicate between cavalry squadrons, each of which had a trumpeter.
There were over 40 different bugle calls used in the field, all to command horses. Formations were controlled by calls known to the cavalrymen and made easier to remember by the addition of words in songbooks.
The trumpet was played again at the Household Cavalry Musem during preparations for the 200th Anniversary of the Battle of Waterloo in 2015 and you can watch the video and listen to the call being played here.
A far older sound recording of a Waterloo bugle was made in 1890 in London by trumpeter Landfried of the 17th Lancers, who is said to have played the charge at Balaclava using this Waterloo bugle. You can listen to that recording here. 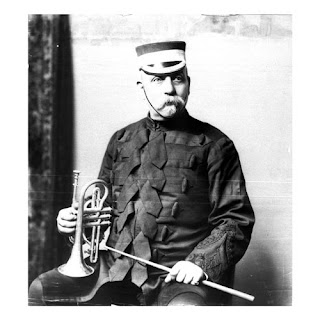 For more on Martin Lanfried, visit the Lives of the Light Brigade site.

Want more Waterloo? You’ll have the opportunity to walk the key sites connected to the Waterloo Battlefield with guide Ian Fletcher on Number One London’s 1815: London to Waterloo Tour in June, 2017. In addition to the headquarters of both Wellington and Napoleon, we’ll be visiting La Hay Sainte, Quatre Bras, Ligny, Hougoumont, the Lion’s Mound, the newly remodeled Visitor’s Centre and, of course, the Battlefield itself. At every stop, Ian will describe the events that took place there and explain their significance in the Allied victory. This is an opportunity you won’t want to miss.