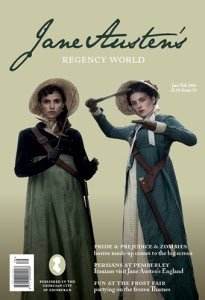 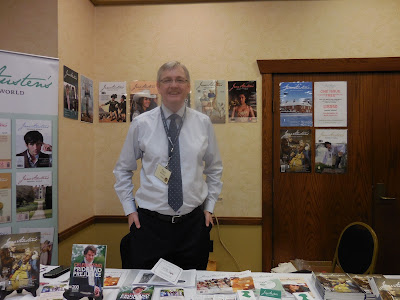 Tim Bullamore, the publisher of Jane Austen’s Regency World, is a charming friend and entrepreneur in journalism.  I had the good fortune to interview him at the Jane Austen Society of North America’s Annual General Meeting held recently in Louisville, Kentucky. 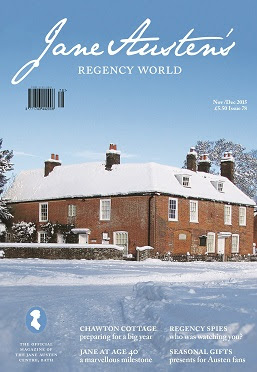 Nov. Dec. 2015 issue
Tim must have to consult his calendar every day to see where he has to be, for his schedule sounds amazingly complicated to a person like me who just sits in front of a computer most of the day.  He is a busy journalist, spending several days a week in London as the copy editor for the London Times.  He write obituaries for the Daily Telegraph about classical musicians. And, in addition to various teaching assignments, he is the editor and publisher of Jane Austen’s Regency World Magazine, which comes out six times a year. And just to provide more variety, his wife holds a university teaching position in Scotland. 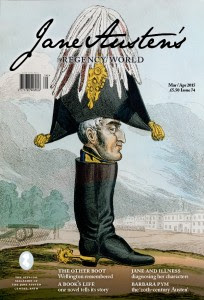 Are you surprised this is my favorite of all Tim’s excellent cover images? 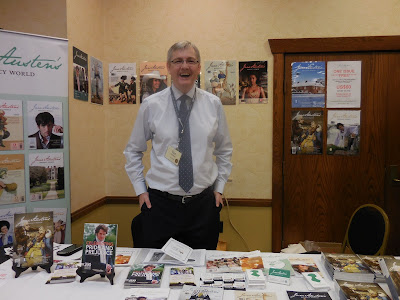 We chatted in the busy emporium at the Louisville AGM where Tim manned a table covered with back issues and subscription forms. He told me how his friends were running the Jane Austen Centre in Bath a few years ago. They confided that their magazine, then part of the Centre’s program, was becoming difficult for them to manage. Being a lifelong admirer of Jane Austen, Tim looked into the financial aspects of running the operation and bought it.  In the eight years of his leadership, the magazine has excelled in providing interesting and entertaining articles about all aspects of the English Regency and new insights into our favorite author.  Not to forget the colorful illustrations — and news of JA-related events.  He is proud of the quality of the printing and binding as well, indeed every aspect of the magazine’s production. 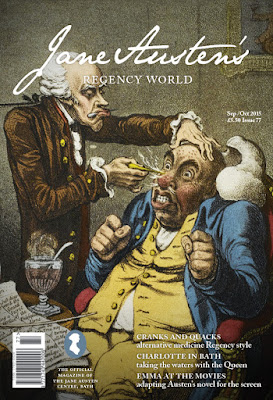 The Sept. Oct. 2015 issue, with a cover caricature from James Gillray in 1801:
using science to treat disease; Article by Penelope Friday.
The content of the magazine ranges among academic and historical subjects, Jane Austen’s life and times, the mania for Regency dancing, Jane Austen in popular culture, including fan fiction, thus appealing to a variety of audiences. 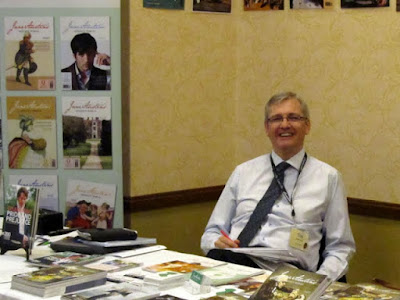 Tim gets a few moments of relaxation in between interviews and courting prospective subscribers.
He spends about a day and a half each week on JARW, working with a small sales staff and editorial consultants. including the renowned Maggie Lane who has written many articles and books on myriad Jane Austen topics.  Time says that as a niche produce JARW has reasonable advertising rates, providing about 20% of income. The rest relies upon subscriptions. 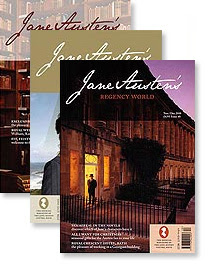 Tim has attended Jane Austen Society events in England, Australia, around Europe, and across the U.S. and Canada.  His first JASNA AGM was in Chicago where he was delighted to receive a warm and enthusiastic welcome from North American Austen fans. He has spoken at several events, including a talk on obituaries in the time of Austen, and a thoroughly tongue-in-cheek “Defense of Mr. Wickham,” (in Minneapolis, 2013) which to his surprise, several listeners took quite seriously. I found it hilarious, casting Mr. Wickham as the victim of Georgiana Darcy’s unsuccessful seductions.
Tim summed up his description of the magazine with an ‘elevator’ pitch: “It has everything you need to know about Jane Austen, the Georgian period and Regency times, full of news, views, and information, an indispensable guide.”
Who could say it better than that?  Thanks for an engaging chat, Tim.  I look forward to another year of reading pleasure.