Victoria here, reporting again from the Louisville, Kentucky, meeting of the Jane Austen Society. Unfortunately I missed the presentation on women’s clothing, but I have to admit I liked all these presentations on men. Okay. No excuses.

First up was Brian Cushing with his Special Interest Session “Dressing Mr. Darcy.” 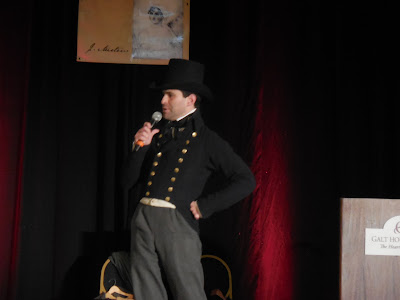 He started fully turned out, though he had to put his walking stick aside for the talk. 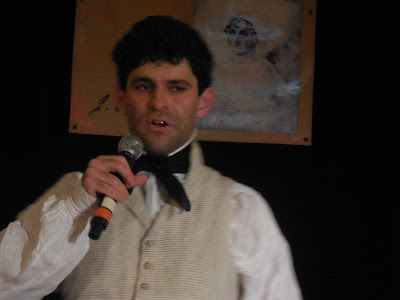 Under the coat was a handsome waistcoat and black neckcloth or cravat. 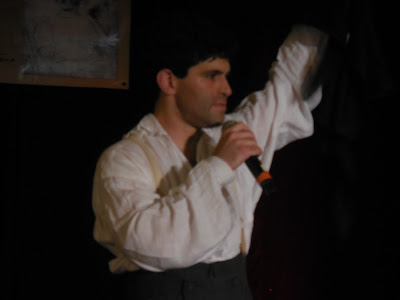 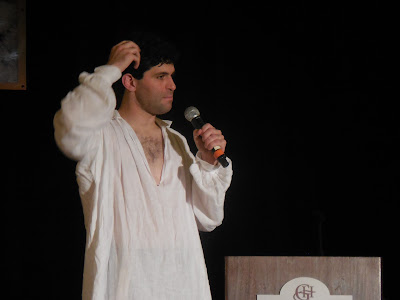 Left in his shirt he talked about how it did not open up all the way down, had extra long sleeves and tails which were pulled up to use as underwear beneath the trousers.

Michael Ramsey presented a Special Interest Session: Hero, Scoundrel, or Dandy: How to step back into Regency England. 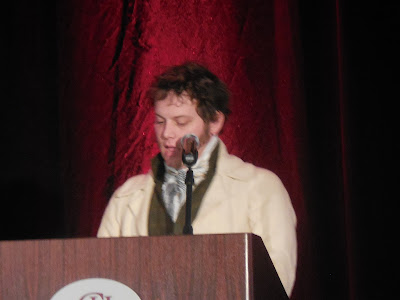 He is himself a tailor of Regency-era apparel. 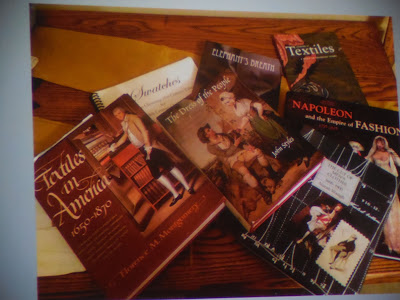 Some of his sources on regency clothing and behavior 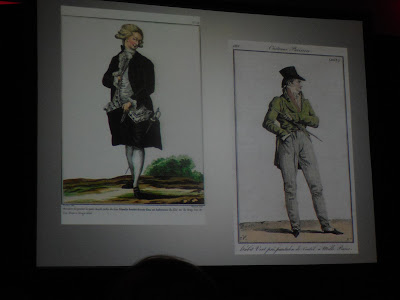 A few of the men;s fashion he showed. 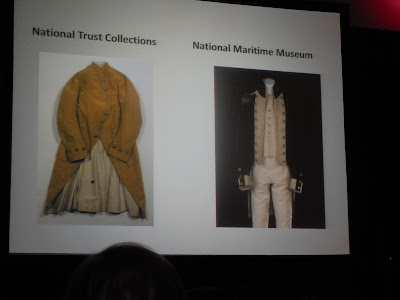 He particularly emphasized the importance of fabric quality in delineating the status of a fellow in regency days.  Re-enactors and costumers need to avoid modern fabrics wherever they ca and be sure the quality of their wool, cotton, and silk is suitable for the character they portray, 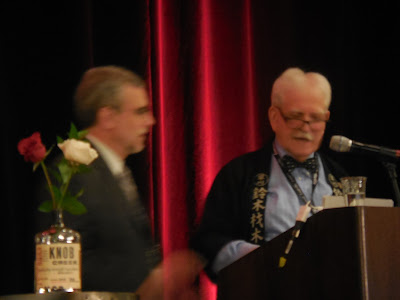 Jeff Nigro left, and William Philips, at the microphone.

In many ways, the regency era was a time of revolutionary change; for example, determination of a person’s status was changing from his amount of land ownership to his personal merit.

George Bryan Brummell
a.k.a. Beau Brummell 1778-1840
Caricature by Robert Dighton, 1805 Present whereabouts unknown
Though George Brummell attended Eton, he liked to pretend he came from nowhere; he thus created his own style and persona, calling himself “Beau” to indicate his spiritual excellence rising above the ordinary. Restrained elegance, superiority of bearing, and a ready wit combined to form his style of ostentatious understatement.

Philip Dawe The Macaroni, a real character at the late masquerade
1773 British Museum
The style of the Macaroni was extreme, and often ridiculous. It was a revolt against this style that Beau Brummell created. He shunned hair powder and cut his hair much shorter. His clothing was subdued in in quiet colors rather than the bright brocades of the past. 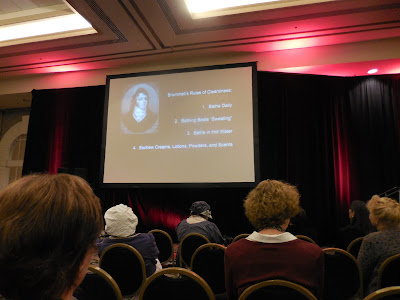 Enrapt listeners
One of the most important features of Brummell’s style was personal cleanliness. Instead of infrequent bathing, he promoted daily baths in hot water and avoided lotions, powder, and scents. 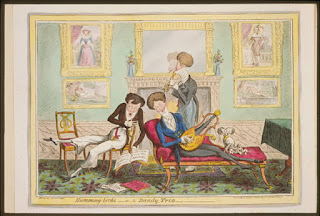 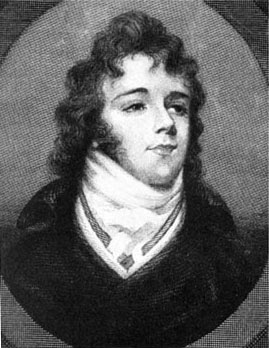 Beau Brummell
Wearing high collars and elaborate high cravats facilitated Brummell;s haughty attitude of looking down at others, enhanced by peering through his quizzing glass. 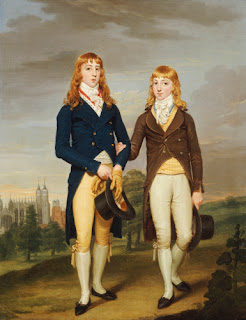 One source for Brummell’s ideal of male fashion was the Eton “uniform.” 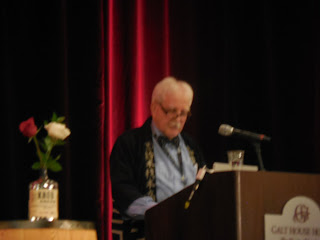 William Philips in a traditional Japanese jacket, a haori

Jane Austen rarely described a gentleman’s clothing in details, but the particulars of demeanor and attitude were often reflected in her delineation of character. 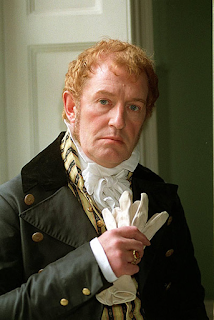 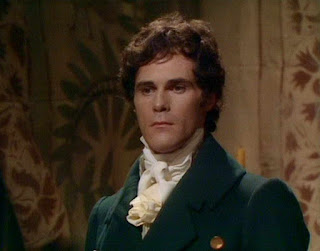 The worthy Mr. Darcy in Pride and Prejudice is the epitome of understated elegance like Brummell’s. 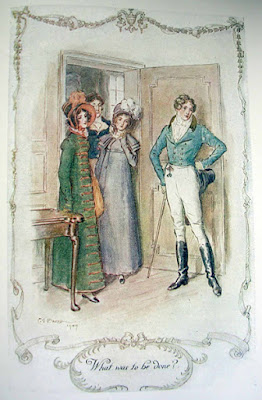 Mr. Frank Churchill’s coat is not described, but the fact he goes to London for a haircut perfectly characterizes him in Emma. 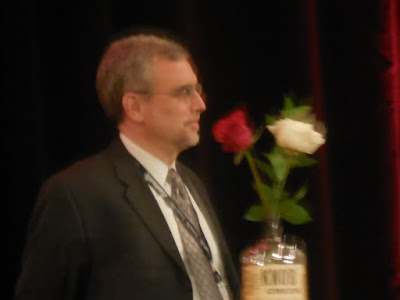 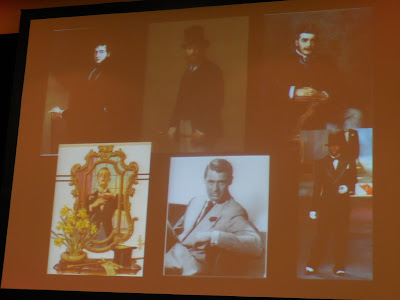 How the Brummell Style has evolved through the years. 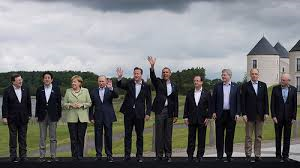 Still with us is the essence of the Brummell style, white shirt, dark coat, dark or buff trousers.

This is just  brief taste of what the presenters gave us….celebrating the men in Jane Austen’s World.