Victoria here, telling you about how Kristine and I began our visit to the Battlefield of Waterloo in June 2010. We took the Eurostar from London to Brussels, an easy trip. After we checked into the Hotel Bedford (note very British name), our bus took us to Evere Cemetery, where we walked to the British Waterloo Monument, a huge memorial set atop a crypt. 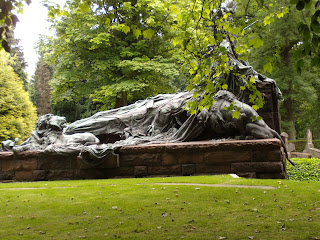 It was commissioned by Queen Victoria in 1870, said to be the “first to honor the dead of a campaign, as opposed to the many memorials that commemorate a victory.”  Seventeen officers remains are buried here. It was dedicated in 1890. 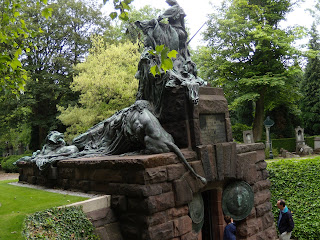 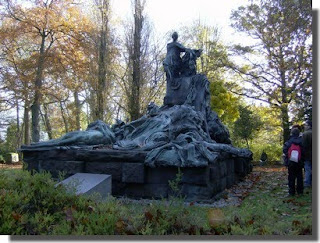 The pictures above and below were taken in the fall, with fewer leafy trees in the way. 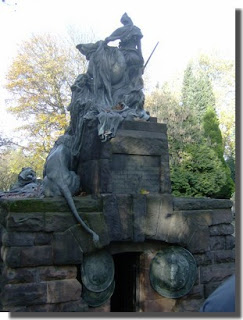 Above you can see the door leading into the crypt. This was reached via very steep steps leading down from the lawn surrounding the monument. 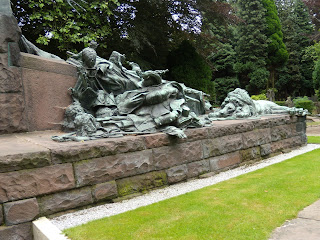 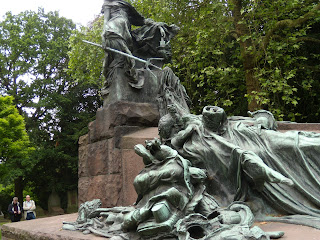 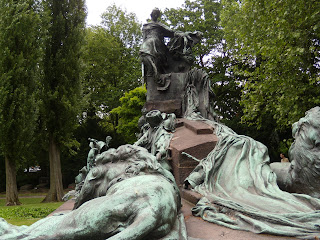 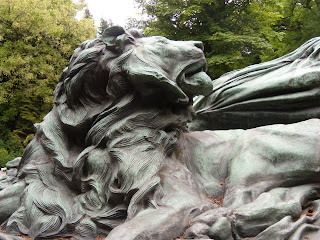 The monument was designed by Belgian sculptor Count J. De Lalaing, whose talent is obvious in the life-like representations of the lions guarding the tombs and the way the fabric seems to flow as it drapes the tomb. 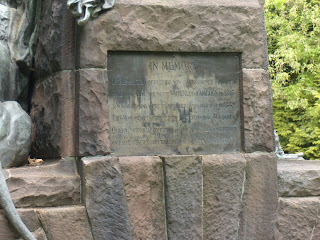 The inscription reads: “In memory of the British officers non-commissioned officers and men who fell during the Waterloo Campaign in 1815 and whose remains were transferred to this cemetery in 1889. This monument is erected by Her Britannic Majesty Queen Victoria, Empress of India, and by their countrymen on a site generously presented by the City of Brussels.” 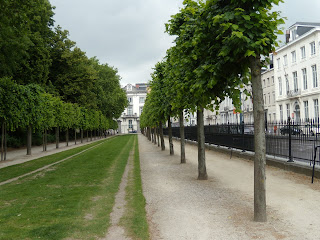 In 1815, this park in the upper town in Brussels would have been full of British and Allied soldiers. In fact, it is the very park through which the diarist Creevey used to pursue the Duke of Wellington in hopes of gaining some news of the expected battle. Time and again, the Duke confounded Creevey with his nonchalance about upcoming events and his apparently carefree attitude, prompting Creevey to write that he thought the Duke must be either mad or drunk. It never occurred to Creevey that the Duke wouldn’t dare tell him anything, as Creevey was well kno
wn to be a gossip who simply couldn’t keep his mouth shut. 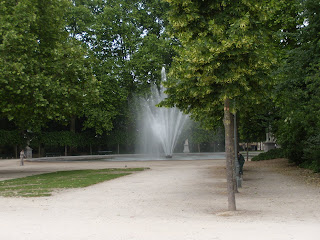 A few years later, in 1830, some of the fighting for Belgium’s  independence from the Netherlands took place here in this lovely park. 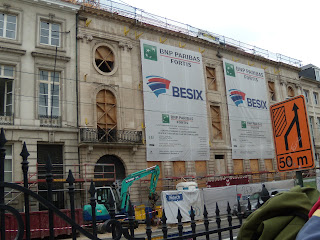 Above is what we saw of the Duke of Wellington’s Headquarters in Brussells which was undergoing renovations during our visit. We couldn’t get a clue as to what the building looked like — unless it was a twin of the building on the left. 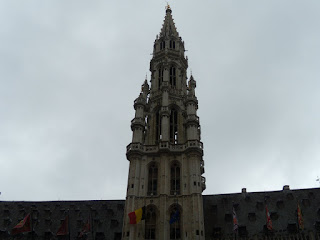 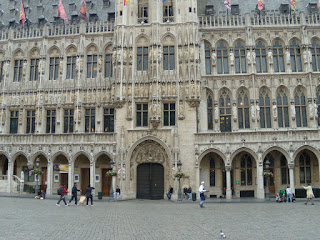 The two above photos above show the City Hall in the Grand Place in Brussels. Below is an image from the web which show’s the building’s location within the Plaza. 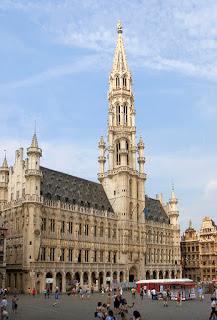 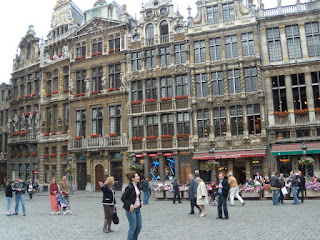 The entire Grand Place is surrounded by elegant buildings and filled with strollers and tourists rubber-necking at their baroque splendor. 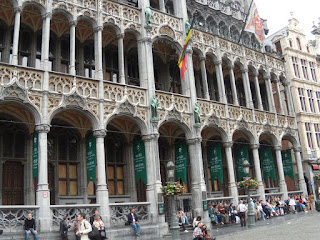 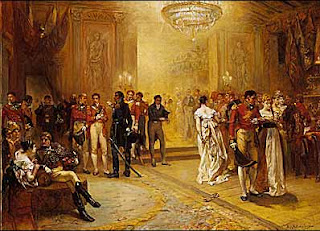 Although we visited the site of the Duchess of Richmond’s Ball, it now contains an ordinary office building and I didn’t even bother to take a picture. The painting above hangs at Goodwood House, country home of the Dukes of Richmond.

Unfortunately, the modern world has obscured many of the features of the city from the 18th and early 19th centuries, but we were certainly thrilled to have stood in these places and to cast our minds’ eye back to what it must have been like in 1815.