Opened in 2007 by Her Majesty, Queen Elizabeth II, the Household Cavalry Museum is located in Horse Guards, with an entrance off the Parade. Victoria here, looking forward to another look at the HCM when the Wellington Tour visits on Saturday, September 6, 2014.  Kristine and I hope you can join us…and refer you HERE for the complete details on the itinerary, costs and the fine print. 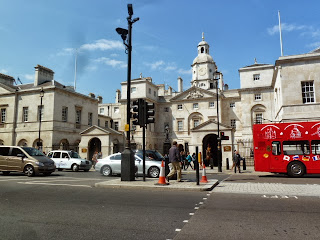 Horse Guards, Whitehall
The history of the Household Cavalry goes back at least 300 years.  Though we are most aware of these soldiers in their colorful traditional uniforms as mounted sentinels at Horse Guards, as they change the guard at Buckingham Palace, and as escorts of the Queen on grand official occasions, the members alternate between active service on armoured vehicles in the “regular army” and ceremonial duties. 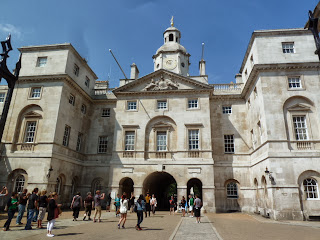 A closer view; the Parade is through the central arch
The Museum provides the history of the Horse Guards Building, designed by William Kent and completed by John Vardy in 1755, after Kent’s death.  The Duke of Wellington, as commander in chief of the British Army in the 19thCentury kept his office in Horse Guards until he retired shortly before his death in 1852. 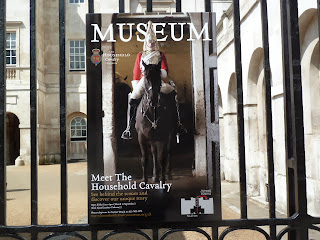 Currently, two regiments make up the Household Cavalry, the Life Guards and the Blues and Royals.  Originating after the 1660 Restoration of Charles II to the throne, they provided personal Security for the monarch. Throughout the 17th and 18thcenturies, the cavalry fought in many wars, in Holland, in Germany, in Portugal and Spain. At the Battle of Waterloo, the regiments served bravely, capturing a French Eagle, a prized standard with far-reaching symbolic importance. It was the bloodiest battle of their history. 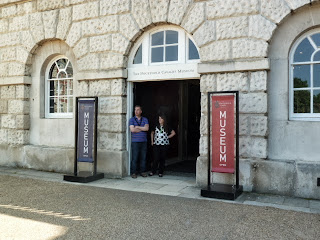 Museum Entrance, opening onto the Parade 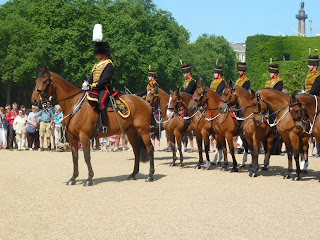 What everyone was looking at on July 11, 2013, on the Parade
The museum also chronicles the service of the Household Cavalry regiments in the Crimean and Boer Wars, among other engagements.  In WWI, WWII, and in numerous later conflicts, the regiments performed their duties in armoured cars, in tanks, and in helicopters. 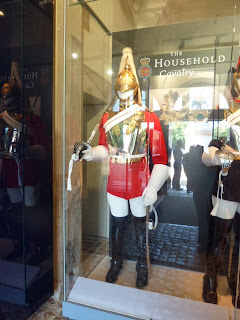 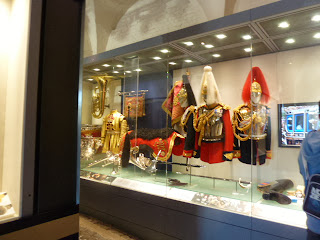 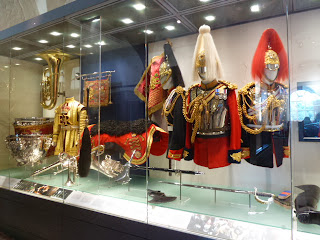 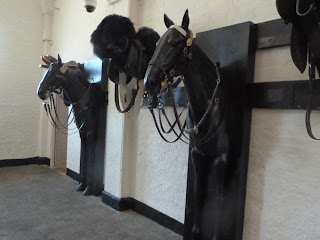 The horses get their due!!
The museum covers the choice and training of the horses, a matter of great interest
to many of us who love the sleek mounts, groomed to perfection and amazingly well behaved.  Each year, the horses are named with the same initial, thus preserving the year of their arrival in the Cavalry.  As an example, from the museum guidebook, “… Invader, Imogene and India arrived in 2008 and Jubilee Jenna and Jupiter in 2009.”  After an average of six months training, the four- or five-year old “recruits” serve for another 14 to 16 years, before withdrawal to a  private stable or a retirement home. 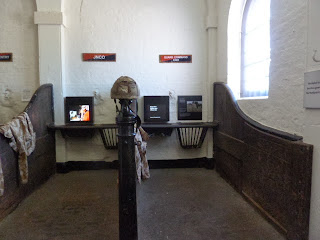 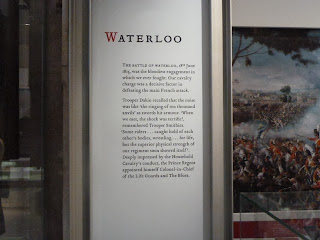 The cavalry commander at the Battle of Waterloo was Henry Paget, Earl of Uxbridge and later, 1st Marquess of Anglesey. As the battle wound down, Paget sat on his horse beside the Duke of Wellington when a cannon shot shattered his leg.  Supposedly he said, “By God, sir, I’ve lost my leg.”  Wellington reportedly replied coolly, “By God, sir, so you have.”  After the amputation, Paget urged many improvements in the making of prosthetics for walking and riding.  He served the government and the army for another 37 years before finally passing away in 1854.  One of Paget’s artificial limbs is on display in the Museum. 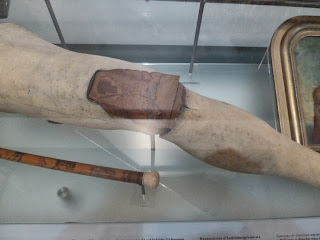 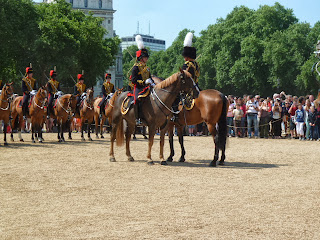 For a few weeks each summer, the Household Cavalry conducts a retreat for the members and the horses at the Norfolk seashore – which is the reason that in my photographs taken in July 2013, their substitutes, members of the King’s Troop Royal Horse Artillery take over, wearing their black ceremonial uniforms based on those of the Hussars at the Battle of Waterloo almost 200 years ago. 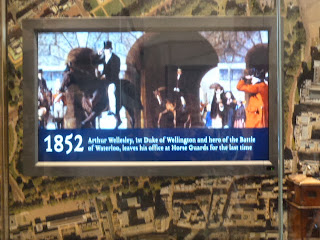 The Duke of Wellington’s office as Commander-in-Chief of the British Army was above the center arch leading from Horse Guards’ Whitehall façade to the parade ground.  The display photographed above depicts the final departure of the Duke from his position shortly before he died in 1852.  He was 83 years of age and had served his nation for 65 years. 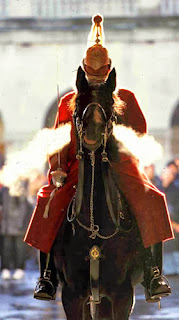 The website for the Household Cavalry Museum is here.
Join us on The Wellington Tour!
http://wellingtontour.blogspot.com