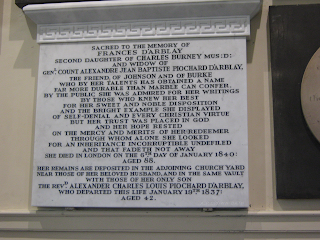 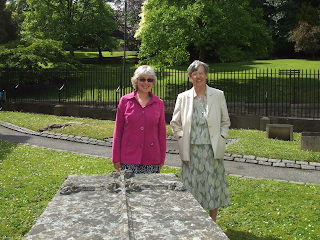 Hester Davenport, right, with Maggie Lane, both members of the Burney Society.
On Saturday 15 June a plaque was unveiled in the gallery of St Swithin’s Church, Bath to Fanny Burney the novelist and diary-writer, or Mme d’Arblay as she was known after her marriage. This righted a wrong dating from 1958, when plaques to her and her half-sister Sarah Harriet were lost. When the St Swithin’s organ was moved downstairs the church authorities, fearing damage, sought to protect them by taking them away beforehand – ironically they then disappeared completely.
There is a strong Burney connection with Bath and with St Swithin’s. Fanny visited it many times and lived there with her husband, Alexandre d’Arblay, after their return from France in 1815. Alexandre died in 1818 and was buried at Swithin’s, and in 1837 her son Alexander joined his father in the churchyard. Fanny, who died in London in 1840 at the age of 88, had asked in her will to be buried there too so all three could be united in death. She had already erected a memorial plaque to her husband in the church gallery and shortly after her own death her heirs paid for an elaborate memorial to her. Her half-sister died in 1844, in Cheltenham, but as she had lived for several years in Bath a memorial plaque was placed beside Fanny’s. (She was also a novelist, and though not achieving the fame of her sister her novel Clarentinewas read three times by Jane Austen, a recommendation indeed.)
The convoluted story does not end there. A huge table-top tomb had been placed over the graves of Fanny and Alexander by Burney descendants, but in 1955 the church decided to exhume the bodies and reinter them near the church (and near the grave of Jane Austen’s father). In the event only the massive tombstone was placed where it is today and the bodies were, without identification, reinterred in a communal graveyard. The tombstone had become an empty sarcophagus.
The Burney Society decided to do something about matters. The sarcophagus was cleaned and re-engraved, and in 2005 a ceremony was held, with onlookers scattering flower petals and the author UA Fanthorpe reading a specially-written poem. Since that event the Society has been fund-raising to replace the missing plaques. Marble plaques with lengthy inscriptions cost a lot of money, and only in the summer of 2012 was the target reached at least for Fanny’s. There was money left over, and a plaque with a simple inscription was planned for Sarah Harriet since the original wording was thought lost. But then a Burney scholar discovered in an obscure volume a photograph of it! This was exciting news except that now another £2000 would be needed for all the extra letters. 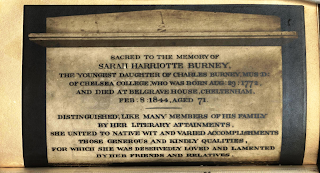 At least now Mme d’Arblay’s spirit must be at rest. The plaque, superbly engraved by Tony Brown (at right in photo below), was unveiled by Maggie Lane (at left in photo below with Burney Society President Bill Fraser). Maggie, well-known to members of the Jane Austen Society, was a founder member of the Burney Society and was for many years one of its Vice-Presidents; she is the author of A City of Palaces: Bath through the Eyes of Fanny Burney. 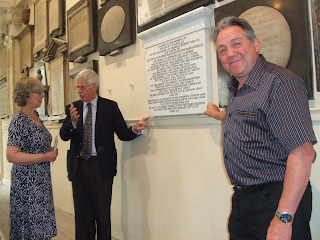 But poor Sarah Harriet (Harriotte in the baptismal register) still has no plaque and the empty space is all too obvious. We are now fund-raising as hard as we can; donations of any size would be much appreciated and could be sent to me: Hester Davenport (Chair British Burney Society), 60 Church Road, Old Windsor, Berkshire SL4 2PG.