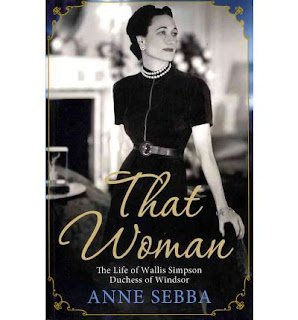 I wonder how many of us can add a guilty fascination with Wallis Simpson to our list of insignificant transgressions?  Admire her or hate her, she remains one of those figures who continues to fascinate.  Last summer, Wiedenfeld & Nicolson published That Woman by Anne Sebba in the UK — and it will be out in March 2012 in the US from St. Martin’s.  The New York Times recently carried an article about the book, which is here.

Above, Anne Sebba, author of That Woman.  Sebba is a lecturer and tv presenter as well as the author of a number of books. According to her website (here), she particularly likes to write about strong women.  Other subjects she has written of include such disparate personages as Jennie Jerome Churchill, Mother Teresa, and Laura Ashley. Of course, the most scandalous aspect of the Duchess of Windsor book was eagerly received by newspapers. Here is an article from the Daily Mail. 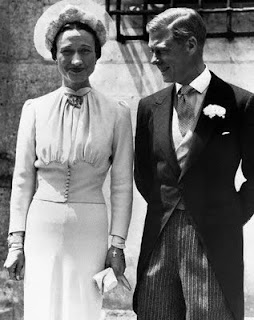 Above, the wedding, in 1937, in France.  Bessie Wallis Warfield was born in Pennsylvania in 1896. The story of how she became the woman who made a king abdicate, one of the most hated women ever, yet a style trend setter and source of endless public attention has been told over and over. Nevertheless, it will be told many more times I am sure.

In many ways, I think the Duke and Duchess led a lonely life of wandering, early in their marriage accused (with some justification it seems) of being Nazi sympathizers, and later of being only too eager to accept whatever largesse came their way from social climbers, publicity seeking hangs-on, and celebrity wannabes. 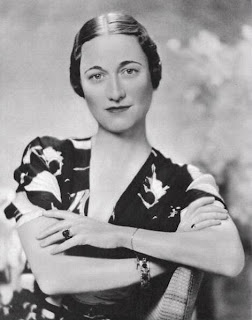 The Duke had a lifelong obsession with the fact his wife could not be correctly addressed as Her
Royal Highness, and he insisted on everyone calling her by that title — which to me would only have made it worse, as every time she heard it, the phrase must have grated.  She was known for some witty phrases — “a woman can never be too rich or too thin.”  Her clothing and jewels were much admired. 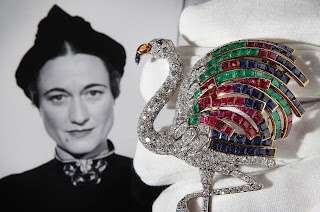 The famous jeweled flamingo clip, above in an auction promotional shot, was sold for a record price. It was made by Cartier in 1940 —  costume jewelry replicas are not hard to find.

Madonna’s film about That Woman — titled W.E. — is set to open in February in the U.S. It got some good reviews from film festivals. And the trailer, below, looks interesting.

In the meantime, while we wait for the book That Woman and the movie W.E., you might take a look at the 1978 television series Edward and Mrs. Simpson, which I recall with pleasure. Though just how guilty a pleasure it was, I shall have to reassess! 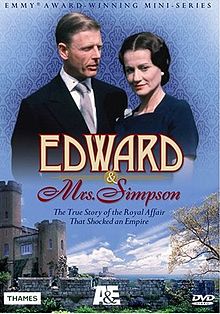 It originally ran in seven parts, and it starred Edward Fox as Edward and Cynthia Harris as Wallis.  Just the thing for an evening when the snow begins to fall and you have a nice bowl of popcorn on hand.  Or make that a couple of evenings!

Like the topic of the late Diana, Princess of Wales, the story has everything — romance, scandal, royalty, and a dysfunctional family. What more could we ask?

6 thoughts on “That Woman is Coming to the US”