Here in the US, Masterpiece on PBS recently presented The Song of Lunch  starring Alan Rickman and Emma Thompson.  A BBC dramatization of Christopher Reid’s poem, the program was unique, in my (Victoria, here) view.  Poetry.  On tv.  Brilliant acting. Emma.  And Alan. Sigh. 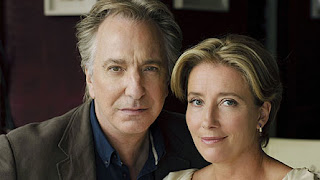 I consider myself a charter member of the Alan-Rickman-can-do-no-wrong Club. Though he has been cast in some unsavory roles, to me he is always a hero.  As “he” in The Song of Lunch, Rickman portrays a self-pitying character who meets a former lover (Thompson) in an unsuccessful encounter for which he had some unrealistic expectations. 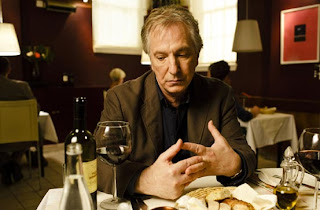 By the way, Alan, I am available for lunch in Soho almost any time — just e-mail me right here. And figure in enough time for me to fly across the pond — and have my hair done. 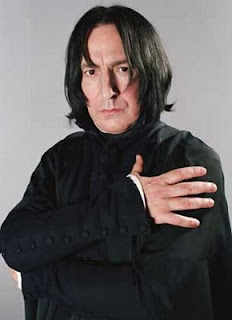 Sad to say, I haven’t kept up with the character development of Severus Snape, the role that most young people will associate most with Rickman.  He was a villain early on, but I believe he evolved into a very good guy in Harry Potter’s world. 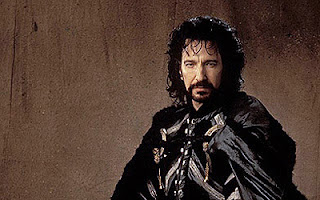 Villain-wise, however, I choose the Sheriff of Nottingham in the 1991 film Robin Hood, Prince of Thieves.  There’s a dastardly fellow we can all love.  If we can stop laughing long enough. 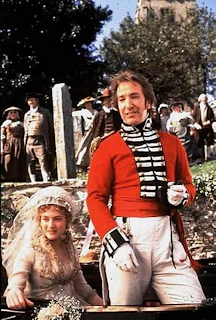 And just about my favorite of Rickman’s many film roles is that of Col. Brandon in the 1996 version of Sense & Sensibility, a role that forever altered my view of Jane Austen’s first published novel. Until I saw — and heard — Rickman wooing Marianne and confessing to Elinor, I had felt only moderate interest in and compassion for Brandon.  But now I can never think of Brandon without seeing and hearing Alan Rickman.  Which makes Marianne’s obsession with the shallow Willoughby even more foolish — and her reluctance to immediately adore Brandon almost impossible to accept. That’s one of the drawbacks to watching filmed versdions of favorite novels, isn’t it?  Can anyone think of Darcy again without seeing Colin Firth? 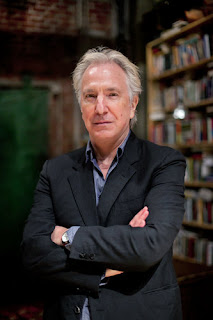 I think I read that Rickman is bound for Broadway soon — so Alan, maybe we could have that luncheon in New York?  Just name that date!!

I am expecting to have to arm-wrestle a few of our regular readers to win this encounter.  I’m ready!!

But wait, there’s  more!  Gambit will be coming out soon (?).  A remake of the 1966 Michael Caine/Shirley MacLaine caper film, this new version stars Alan Rickman, Colin Firth, Stanley Tucci and Cameron Diaz, among others.  The Coen Brothers are involved — but I couldn’t find a set release date. 2012 is all I found. Let’s hope it is as soon as possible!!

10 thoughts on “In Praise of Alan Rickman”