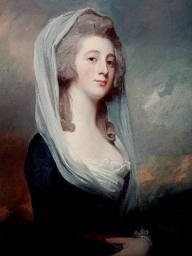 The Portrait of Charlotte Gunning (1759-94)
copyright Chawton House Library
On 15 May 1784 it was the turn of Charlotte Margaret Gunning, Maid of Honour to Queen Charlotte, to have use of the Royal Coach. Her friend Mary Hamilton called at St James’s Palace, and went with Charlotte to ‘Romney’s, the Painter’s’ where Miss Gunning was ‘to sit for her picture’. That half-length portrait now hangs in Chawton House Great Hall.
Mary Hamilton had also been employed in the royal household, to help with the education of the young princesses; she found her duties arduous, thankfully withdrawing from court after five years. Perhaps the two young women talked over the difficulties of royal service, which included their reputations as ‘learned ladies’. Both had had ‘masculine’ educations in the classical languages: according to Fanny Burney Miss Gunning was derogatively nicknamed ‘Lady Charlotte Hebrew’ for her learning.
Charlotte was the daughter of Sir Robert Gunning (1731-1816), a diplomat who was so successful in conducting the King’s business with the Empress of Russia that in 1773 he was made  Knight of the Bath. His daughter’s appointment as Maid of Honour to Queen Charlotte in 1779 was no doubt a further sign of royal favour. He had two other children, his son George who would inherit the baronetcy, and another daughter Barbara. His wife had died when Charlotte was eleven-years-old, but in the 1780s he ordered portraits of himself and his three children from the society portraitist, George Romney (1734-1802).
The painting of the 25-year-old Charlotte is interesting in its apparent contradictions. The colours are muted, with the head veiled in white and the black dress severely plain, yet it is very low-cut, and the sitter looks out self-assured and even challenging. A warm glow in the sky behind suggests there is feeling and passion beneath that cool exterior. Charlotte’s hair is dressed high on her head and fashionably powdered. A hat might have been expected, but scarves, called ‘fascinators’, sometimes replaced large hats, especially for evening wear.
There were six Maids of Honour, paid £300 a year, with duties that must have been stultifyingly dull, standing in attendance at the Queen’s ‘Drawing rooms’ and other court functions (though periods of duty were rotated). Charlotte kept her position for nearly twelve years before managing to escape. It was not easy to withdraw from royal service, as both Mary Hamilton and Fanny Burney discovered, and reaching her thirtieth birthday in 1789 Charlotte must have feared a dreary life of spinsterhood. But on 6 January 1790 she achieved an honourable discharge when she married a widower, Colonel the Honourable Stephen Digby, the Queen’s Vice Chamberlain. Another of Charlotte’s friends, Mary Noel, wrote in a letter of her surprise that Sir Robert gave his consent ‘as it must be a very bad match for her if he has four children’, though she also recorded Charlotte saying that she ‘can’t live without his friendship and could not keep that without marrying him’.
For Fanny Burney the news of the forthcoming wedding was a shock: she believed that Digby had been paying her marked attention for two years and that she should have received the proposal. Her sense of betrayal was huge and she gave vent to her feelings in page after page of her journal. She never blamed Charlotte but no doubt got sly pleasure from noting the King shaking his head over ‘Poor Digby’ (because his bride was a learned lady) or recording the strange details of the wedding: that it was performed by Dr Fisher, Bishop of Salisbury, in the Drawing-room of Sir Robert’s house in Northampton, with the guests sitting round on sofas and ladies’ workboxes not cleared away. The new Mrs Digby paid a visit to Miss Burney, ‘quite brilliant in smiles and spirits’ and Fanny did her the justice of saying that she believed that Miss Gunning had ‘long cherished a passionate regard’ for Colonel Digby.
Two children, Henry Robert and Isabella Margaret, were born in quick succession, but the marriage was not to be long-lasting. In June 1794 Charlotte Digby died (possibly in childbirth – the brief obituary notice in the Genteman’s Magazine gives no cause of death). She was buried in the vault of Thames Ditton church where Digby’s first wife lay: he would join his two ‘dear wives’ there in 1800.
Charlotte Gunning wrote no books, has found no place in history. But there could surely be no more suitable place for her portrait than Chawton Women’s Library, in the society of so many other ‘learned ladies’.
Permission to reprint this article, which first ran in The Female Spectator, was kindly granted by that publication and Chawton House Library.