﻿﻿﻿
From the Letter Bag of Lady Elizabeth Stanhope

“Another Yorkshire neighbour whom the Stanhopes visited at this date was Mr Beaumont (1) of Whitley Beaumont, and although on this occasion the entry regarding their visit is scanty, a fuller description of their eccentric host, written by Marianne the following autumn, may be here inserted : —
Nov. 1808.
Last Monday we met the Mills’ at Grange, she, delightful as usual. We returned the next day, and in our road called on Mr Beaumont of Whitley. The master of Whitley is a strange creature, half mad. He leads the life of a hermit, and has not had a brush, painter or carpenter in his house since he came into possession many, many years ago.
It is more like a haunted house in a romance than anything I ever saw. He is now an old man, and has never bought a morsel of furniture; half the house never was finished; one of the staircases has got no banisters. The stables were burnt down some time ago and have never yet been rebuilt. The rooms he lives in have not been put to rights for many years—a description of the things they contain would not be easy,—hats, wigs, coats, piles of newspapers, magazines and letters, draughts, bottles, wash-hand basins, pictures without frames, apples, tallow candles and broken tea-cups.
The whole house looks like a place for lumber. There are some fine rooms, but so damp and mouldy it is quite shocking. There is a chapel completely filled with old rubbish and a plaid bed which was put up for the Pretender.
In the room Mr Beaumont sleeps in I saw his coffin made of cedar wood. He scarcely ever sees a living creature and quite dislikes the sight of a woman. He does everything in the room, which no housemaid ever enters, nor indeed any part of the house.”
(1) John Beaumont, Esquire of Whitley Beaumont, Yorkshire, born 1752, died 1831; married Sarah, daughter of Humphrey Butler, Esquire of Hereford. 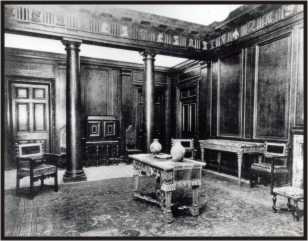 The house referred to above, Whitely Beaumont Hall, was owned by the Beaumont family for some 400 years. The Hall was built by Sir Richard Beaumont and was last owned and occupied by the Sutcliffe family, the last owner being Charles Sutcliffe. His great nephew wrote in the Yorkshire Post and recalled visiting the “secret garden” and sitting on an old World War One field gun kept in the front garden.

Charles Sutcliffe was a member of the Rockwood Hunt and hunt balls were held in Whitley’s great hall. During the Second World War, Charles Sutcliffe loaned the grounds for army training manoeuvres and camps. The Sutcliffe family were the largest individual maltsters in Great Britain with kilns in many parts of northern England, many of which were in Wakefield. Charlie Sutcliffe died in 1948.
Scouts first camped at Whitley Beaumont in 1928, Charles Sutcliffe allowed Scouts to camp in the hall’s kitchen garden. There is some question over the exact date, some locals suggest 1928, whilst Huddersfield Scout archives suggest that the first use was in 1929. By October 1935 it was recorded in the local area records that “the estate manager had allowed Scouts to camp at Whitley Hall and 102 weekend camps had been arranged.”
Peter Hinchliffe in the Examiner, June 26th 1998, referred to earlier times when his mother as a 16 year old witnessed the auction of the “fittings of the mansion” Wednesday May 16th 1917. These included an Elizabethan and a Georgian mantel piece in marble, and oil paintings by Italian masters. He notes that the Hall fell into disrepair and that Charlie Sutcliffe described it as his “shooting box.” He entertained friends by candlelight, as there was no electricity.
Peter recalls sneaking up to peer in at the windows while a military ball was in progress, during the war, and then the auction at the Three Nuns in 1950 when the Hall was bought by a Halifax demolition firm for £2500 and the woodlands and parklands sold off for some £20,000. The hall was demolished in the early 1950’s and the area surrounding the site was extensively open-cast mined.  Parts of the property remain a scout camp. 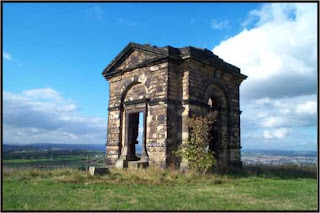 The ruins of a Summer House, or Temple, are all that remain of Whitley Hall.

4 thoughts on “The Story of Whitley Hall”