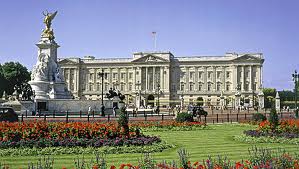 In all my visits to England, I’ve never managed to be in London during public openings of Buckingham Palace. And I didn’t expect it to be open this time over, either. As I mentioned in a previous post, one day whilst in London I strolled across the street from our hotel to the Royal Mews gift shop and while there I overheard one of the ladies who works there telling a man about an unprecedented opening of Buckingham Palace while the family was away over the Christmas holidays. On that day and the next, the Palace would be offering two private, guided, champagne tours each day. Tickets were to be had a few doors down at the Queen’s Gallery. Honestly, dear Reader, no one ever covered the ground between the gift shop and the Queen’s Gallery as quickly as I did that day. I snapped up two tickets to the 4 p.m. tour that very day – by the way, the tickets were enclosed in a really impressive blue envelope, with directions on what forms of I.D. to bring – and then I hightailed it back to the hotel to crow at Greg about my coup. Even he was impressed. And excited. 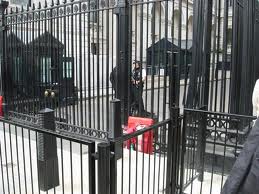 As instructed, we arrived at the gate on the Queen’s Gallery side of the Palace in Buckingham Palace Road at 3:45. After showing two forms of picture I.D. each, Greg and I were personally escorted to the Ambassador’s Entrance of the Palace and passed through a security screening. Typically, when the Palace is open during the summer, visitors are taken inside in large groups, with over 7,000 visitors coming through in all. Over the two days the Palace was opened in December, just 100 people would have the opportunity to view the interiors. This personalization was evident from the start – we were shown into a waiting area and given upholstered chairs to sit upon until the rest of our group had arrived. Greg and I gawped, goggled, gaped and poked each other in the legs for a while before I turned my head to the right . . . and saw Chantrey’s bust of the Duke of Wellington! 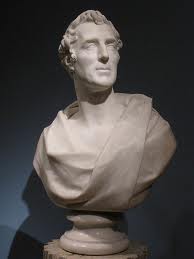 To digress, by this point in our London visit, it had become abundantly clear to Greg that several people other than myself actually knew who the Duke of Wellington was, our having seen Apsley House, the Wellington Arch, Wellington Place, Wellington Street and having had dinner in the Wellington Pub. Vindication at last!

But back to the Palace . . . . once we were all assembled, our tour guide, Dawn, greeted us and took us into an antechamber where a coat check had been set up. We then assembled in a massive hall, where there were full length portraits of Queen Victoria and Prince Albert, amongst others. This chamber opened onto the staircase, below, and we were invited to ascend and stand on either side of the staircase whilst Dawn told us a bit about the paintings – William IV, Queen Adelaide, Prince Leopold, Princess Charlotte,  etc. etc. etc.  As The British Monarchy Website explains: “Queen Victoria requested that the series of portraits of her immediate family were displayed around the upper part of the stairs. These include her grandparents, George III and Queen Charlotte, her parents the Duke and Duchess of Kent and her predecessor on the throne, her uncle William IV, and his wife Queen Adelaide. Thus the portraits served as a kind of ‘receiving line’ so that whoever climbed the staircase was simultaneously received by her family.” 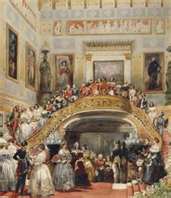 I should tell you here that in addition to Dawn, there were two other uniformed Palace people attached to our group, one of whom preceeded us and opened the tall, double doors to every room we entered, the other followed our group and closed the doors behind us as we left. And whilst you might think that decorum ruled the visit, you’ll be glad to know that Dawn encouraged us at every step to make ourselves at home – “get up close and get a good look at that painting; do go over to the windows and push the curtains aside for a look at the lawns where the garden parties are held; take a seat – any seat; yes, yes, do go on up to the front and stand where those who are being knighted stand. Terribly fun, is it not?” Greg and I kept catching each other’s eye and making faces. Terribly fun, yes.

Of course, no photos were allowed, and I’ll admit here and now that I could not for the life of me tell you the exact route of our procession through the State Apartments, but here are some photos of some of the rooms we visited. Note: the work of architect John Nash was evident everywhere and his ornate ceilings and fireplaces appeared in almost every room. 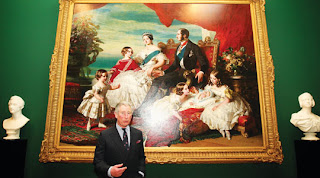 Where I saw Winterhalter’s portrait of the Royal Family, above, which Victoria and I had previously viewed at the Victoria and Albert: Art in Love Exhibition at the Queen’s Gallery in June. No, Chuck was not actually present during my tour. More’s the pity. 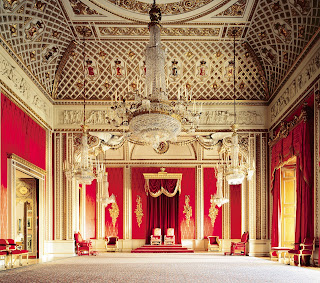 Shown above is the old Throne Room, used up until the reign of Queen Victoria, who found it too small and had another built, large enough for dancing. You can’t see it in the photo, but on the wall to the left of the thrones hangs the only portrait in the entire room, shown below. 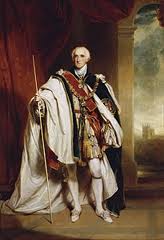 As Dawn hadn’t mentioned the portrait, I sidled up to her and asked, “Pardon me, but isn’t that a Wellesley?”

“Yes,” Dawn replied, “He was brother to the Duke of Wellington.”

Greg was impressed, too. I was a tad depressed. After all, the ability to properly identify Wellesleys isn’t all that impressive as party tricks go. I mean, how often can one flaunt such a talent? And to whom? The ability to eat fire, do bird calls or play the zither would be much handier, but one must be satisfied with one’s lot in life.

This is the new throne room below, where investitures take place and where all the chairs are hauled out and an enormous table laid for State Banquets. 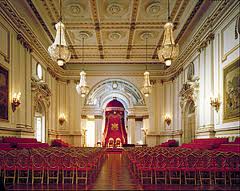 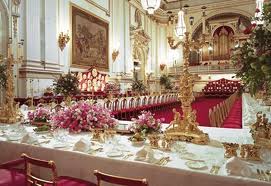 We ended our tour exactly where we’d begun, in the Great Hall, shown below, where flutes of cold champagne were served before we all trooped off to a makeshift giftshop near the cloakroom. 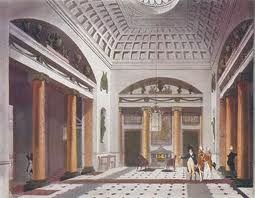 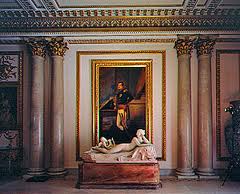 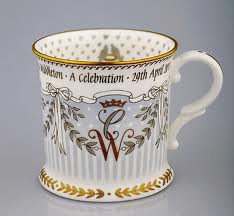 And where I bought myself an official William and Kate wedding tankard. Once we’d collected our coats, Greg and I were each handed an official Buckingham Palace Souvenier Guide and the pair of us were personally escorted out, across the quadrant below 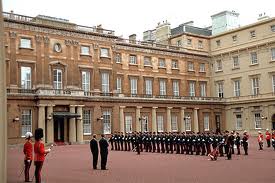 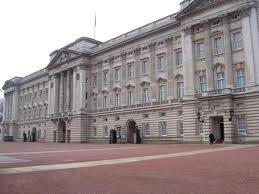 and through the archway on the far right 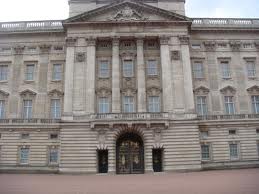 ﻿to the front of the Palace, where we were finally escorted through the entry gate. By this time, night had fallen and we paused to take one last look back at the Palace, where we’d enjoyed a truly Royal visit. 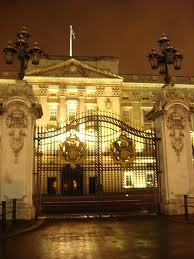 3 thoughts on “A Visit to Buckingham Palace”