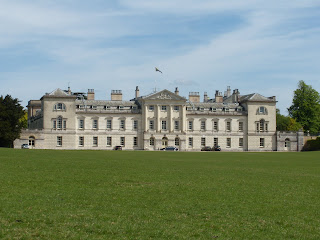 Woburn Abbey is the home of the Dukes of Bedford. When I visited in May, 2009, I thoroughly enjoyed the vast grounds, lovely gardens, deer park and most of all, seeing the house itself. At one point in our tour, the escort stopped just as we entered a room. “Excuse us, Your Grace,” she said to the Duchess of Bedford.  “Oh, come right in,” said Her Grace and continued her photo session with one of her two children.  We gaped a while, then slipped away for the tour guide to fill us in on what we should have looked at in that room. But we had been much too busy watching the photographer, the tot and Her Grace, to notice the furnishings. A picture of the present duchess and her family is at the end of this blog. 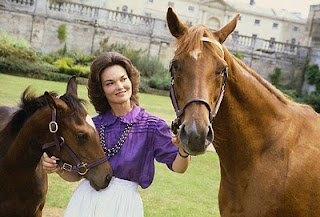 Which brings me to the many stories of the fascinating  women who were Duchesses of Bedford.  This is Henrietta, dowager Duchess of Bedford, mother-in-law of the duchess I saw at Woburn.  Born in 1940, she was a debutante of the year, a fashion model and remains a dedicated horse lover. She and her husband, Robin, 14th Duke, ran a prosperous and successful bloodstock operation at Woburn.  A wonderful blog called The Esoteric Curiosa has a collection of pictures of Henrietta throughout her life here. 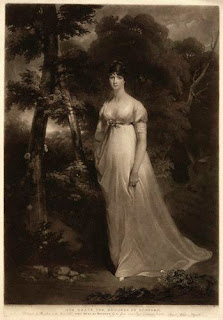 Henrietta reminds me quite a bit of Jacqueline Bouvier Kennedy. The dowager duchess continues to live on the Woburn estate.  Reaching back a bit farther, at left, Georgina Gordon (1781-1853) was the daughter of the Duke of Gordon and his wife, Jane, a great rival of Georgiana, Duchess of Devonshire, for social and political entertaining. Georgina was the third daughter of Jane Gordon to marry a duke. Georgina’s story is told on one of my favorite blogs, Scandalous Women, by Elizabeth Kerri Mahon here. 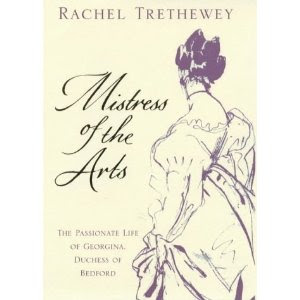 For a book length story of Georgina’s life, I recommend Rachel Trethewey’s 2002 Mistress of the Arts: The Passionate Life of Georgina, Duchess of Bedford.   Georgina was the second wife of John Russell, 6th Duke of Bedford (1766-1839); his first wife was Georgiana Byng, Duchess of Bedford. Don’t be surprised if writers get them mixed up. That pesky A is a problem! Late in her life Georgina reputedly had a long affair with the artist Sir Edwin Landseer, who was one of Queen Victoria’s favorite artists. 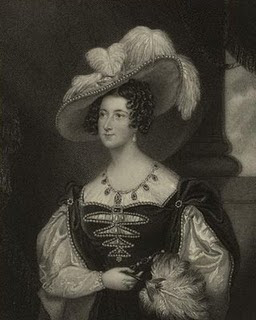 A more refined story is that of Lady Anna Maria Stanhope (1783-1857), wife of Francis, the 7th Duke of Bedford (1788-1861).  It is to Duchess Anna that we owe the tradition of  afternoon tea. Since evening meals had been pushed later and later, she wanted a light snack in the afternoon, just tea and sandwiches or little cakes.  She often invited her friends for this repast and the custom spread to the middle classes.

Mary (1865-1937), known as the Flying Duchess, had an adventurous life. She married Herbrand Russell, then aide-de-camp to the Viceroy of India, at Barrackpore in 1888. When her husband’s brother died without issue in 1893, the couple and their son returned to England as the 11th Duke and Duchess with son Hastings, then Marquess of Tavistock as the heir to the dukedom is styled.  Mary and her husband were avid ornithologists and travelers. During WWI she established a hospital at Woburn where she worked with wounded soldiers. She learned to fly airplanes in the 1920’s and after many long trips, some showing considerable daring, at age 71 she and her plane were lost over the North Sea in March 1937.  Three years later, her husband passed away and her son Hastings (1888-1953) became the 12th Duke.

Presently, Andrew Ian Russell is 15th Duke of Bedford.  He and Louise, the present duchess, have (at last report) two children, Lady Alexandra Lucy Clare, born in 2001, and Henry Robin Charles, Marquess of Tavistock, born in 2005. 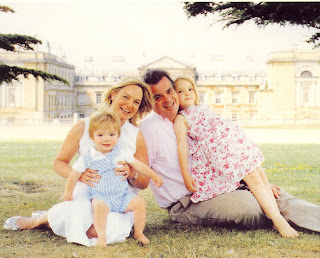 According to Wikipedia, Duke Andrew has a fortune of about 490 million pounds. Like most families owning a huge country estate, he must see that the properties continue to make an income adequate to support repairs and projects, not an easy task. Some, but not all of the original Bedford Estate in Bloomsbury remains in the Bedford’s hands. 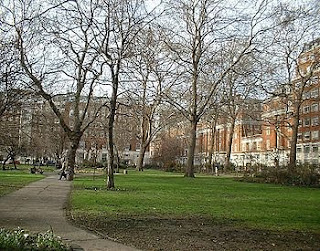 Tavistock Square was the site of some of the terrorist bombs in London in 2005.

But not to end on such a depressing thought, we’ll have a last look at Woburn Abbey, a magnificent treasure house and a joy to visit.