Victoria here.  We have reached the spot in our Rhine Cruise where the river is the border between France and Germany. Today we toured the city of Strasbourg, home of the European parliament aand other EU institutions.

So I shouldn’t have been surprised to find the first Place we encoutered was Place d’Austerlitz, where the Corsican general and his troops stopped on their way to the important battle of the same name, which thoroughly whipped the Austrians, IIRC. Hmmmm.

But despite that little reminder, the town itself is charming — parts of it are very French and parts monumentally German. It has passed back and forth, as has its whole region of Alsace a number of times. Here is some of the French part.

Many canals and the river Ill flow through and around the town center.  We saw lots of storks which live at the top of specially trimmed trees and quite calmly stared at us from their large nests.  Around the town I also saw evidence of the geese the region is famous for, but not a single one on the  river — just swans and ducks. 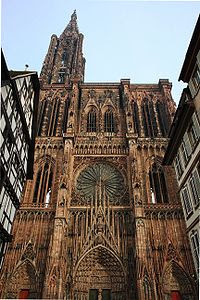 Of course the city is renowned for its ancient cathedral, combining Romanesque and Gothic features. It has a very complicated astrological clock that keeps the time, date, month, year, sign of the zodiac, lunar phases, etc.–all so old you would never guess they had the ability to fine tune such a huge instrument.  Some of the windows are extremely old and quite beautiful. The large rose window was destroyed in WWII bombing, so it is a new creation.

We finished off our stay with a lovely luncheon of French specialities: Quiche Lorraine and Flambe something, which was a very thin-crusted pizza aith local cheeses. And lovely wine from nearby vineyards. 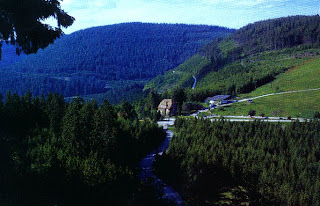 Tomorrow we cruise further south, which is upstream, since the Rhine flows from Switzerland (Lake Constanz) to the Niorth Sea. Our curise direction,  from Amsterdam to Basel, has us moving south but upstream and the current is very very fast.  The boat must have a good strong engine to push us along, while going the other way, you’d hardly have to use any power at all except to stay in the channels.

Our off-boat trip will be to a section of the Black Forest.  Then on Sunday morning Ed and I leave the Viking Sun and take the train to Paris where we merely change stations to return to London by Eurostar.  I am busy making plans for a few last minute visits on the one day we have in London before going home.

I believe that Kristine and Brooke are soon to be back home, so next week, we will try to fill you in on all our London activities (we didn’t have a computer until Ed arrived), and sift through our pictures and video. I hope some of them, at least, will be worth the wait.