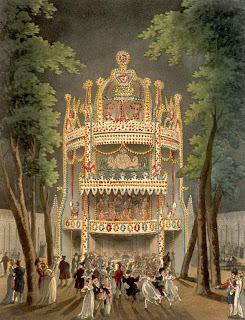 Drat, drat, drat! So much London, so little time. Just when I thought I had everything I wanted to see on the agenda, up pops something else I simply must make time for. Sigh. Like the Galleries of Modern London exhibition at the Museum of London. The £20m exhibition will aim to capture London’s tumultuous history from 1666 to the present day, using 7,000 objects and interactive displays and film transport visitors through London’s tumultuous history, rich with drama, triumph and near disaster. From the Great Fire of 1666 to wonders of invention at the Great Exhibition in 1851, the Suffragettes’ fight for voting rights to the fashions which made the sixties swing, the galleries are an experience of rebirth and renewal, of excess and struggle. 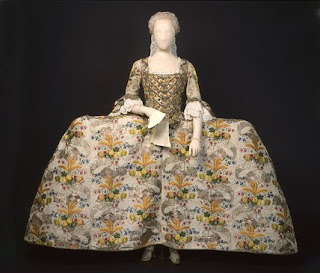 A few of the highlights of the exhibit that made me decide I just had to see it are the Lord Mayor’s State Coach built in 1757 and the Pleasure Gardens. Yes, the Pleasure Gardens. Visitors can stroll through recreated late 18th century pleasure garden full of period costumes and specially commissioned masks and hats. There’s a picture of Vauxhall Gardens (see above) beside the blurb in the brochure, so you know this is going to fabulous! Then there’s the Victorian Walk, where you can window shop along the recreated streets and even stop in at a pub. There’s also an original Wellclose Prison cell from the 18th century – complete with period graffiti. In addition, they have the Fanshawe dress on display (above). Made from Spitalfields silk, it was worn by Ann Fanshaw when her father was Lord Mayor 1752-53. 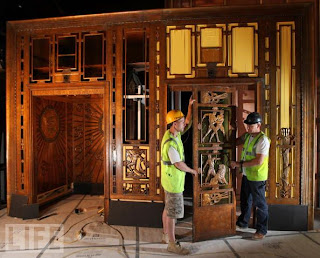 To prove that the Museum of London is moving along with the times, they’ll be installing a 3D exhibit in Trafalgar Square promoting the exhibiton and will be launching an iPhone app that will guide users to sites across London where they can explore some of the city’s hidden secrets that feature in the exhibition.

At left is a photo of the front of Selfridge’s Deptartment Store being installed at the Museum of London.

Vicky Lee, marketing manager at the Museum of London, said: “The launch of this new app brings London’s rich history to life for Londoners and tourists alike. iPhone users can create their own trails around the capital and view images of London past, while standing in the very locations they depict.”

Click here for a recent London Times article on the new exhibits.