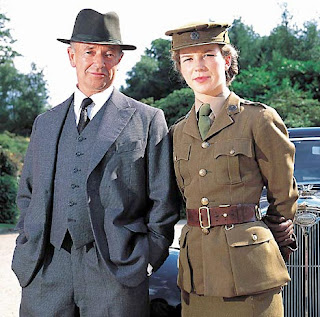 Oh, boy. This one’s a winner. Not Regency, not Victorian, but a series that will quietly grab you and have you hooked by the end of the first episode.

I’d written this post in draft weeks ago and only found out yesterday from Jo Manning that the new episodes were being aired on PBS Mystery starting last night. Sorry, sorry, sorry for missing the boat on this, but there’s no time like the present to let you know about Foyle’s War if you aren’t familiar with it. And if you are, there’s no time like the present to tell you that next two new episodes in the series will air on Sunday, May 9 (Killing Time) and Sunday, May 16 (The Hide).

In early World War II Britain, as British soldiers and pilots valiantly resist the German forces on land and in the air, their kinsmen at home face head-on the effects of the awful war that has engulfed their nation. Food rationing, black-outs, German bombing raids, all these and more are daily reminders that no one is to be spared.

For Detective Chief Superintendent Christopher Foyle of the Hastings police department, a man who served his country in World War I and then rose through the ranks of the police force to his current position, sitting on the sidelines during this war is frustrating. Requesting more direct involvement but continually rebuffed by his superior officer, DCS Foyle is further frustrated by a shortage of manpower that impedes his powers of policing.

As Foyle quickly learns, however, the role he plays is in no way a small one, for the war has certainly not brought a cessation of crime. If anything, it has intensified the heinous nature of domestic crime when carried out against innocent people already suffering, sacrificing, and struggling to persevere in such a brutal time.

Each episode of Foyle’s War, created by Anthony Horowitz (Midsomer Murders), blends real-life war stories with tales of treachery and suspense. Whether investigating sabotage, looting, stolen food or fuel supplies, police brutality of conscientious objectors, treason, or murder, Foyle and his colleagues must wage their own personal war amidst the tumult of a larger one. But more than a period whodunnit, Foyle’s War is redolent with rich human drama subtly revealed through the lives of these main characters who make up the heart of the series. Steadfast and loyal to each other, they strive to uphold the values for which they and their countrymen – their loved ones – are fighting and dying. 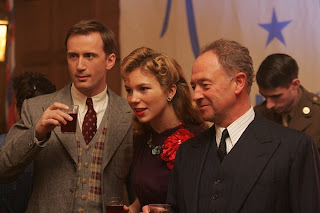 Michael Kitchen, as Foyle, doesn’t say much and prefers fly fishing to socializing, but Oh My is he clever. The human side of the war is emphasized through continuing secondary plot lines that involve the ongoing love life of Foyle’s female driver, Samantha. She even has an ongoing fling with Foyle’s son, an ace fighter pilot. Foyle’s second in command, Sergeant Milner is a wounded vet who lost a leg in the war – a fact his wife is unable to deal with.

Foyle’s War was created in 2001 by author Anthony Horowitz and commissioned by ITV1 to fill the void following the end of long-running detective series Inspector Morse. Set in Hastings, it ran to 19 episodes and featured Foyle’s attempts to catch criminals taking advantage of wartime confusion. Now, three more episodes have been made (wooo hooo!), with Michael Kitchen reprising his role and Foyle’s peacetime exploits are likely to feature his female driver, Sam, more prominently. Foyle’s War will return to ITV1 with a “new style series” set in June 1945, after VE Day signalled the end of the conflict in Europe, but with the war against Japan in the Far East not yet concluded.

“Like everyone else, detective chief superintendent Christopher Foyle needs to feel his way in this new world. Keen to retire, but bound to his old job by the shortage of senior men, Foyle is thrust into the dangerous worlds of international conspiracy and execution, military racism and national betrayal,” ITV said.

The series producer, Jill Green, added: “This fascinating period post-VE day has rarely been featured on TV and once more Foyle’s War will be unearthing true stories that reflect tougher, moodier times.”

6 thoughts on “Do You Know About Foyle's War?”