London streets provide atmosphere galore, as does the Victorian era corner of Mercer Street, below. 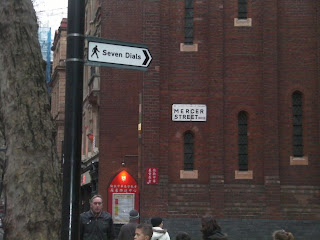 Sometimes it feels as though a peek down any street will provide you with a glimpse of something historical or iconic. The photo below shows the award winning and celeb favorite Ivy Restaurant in West Street in the West End on the left and the St. Martin’s Theatre just beyond, where Agatha Christie’s play The Mousetrap has been playing since 1952. 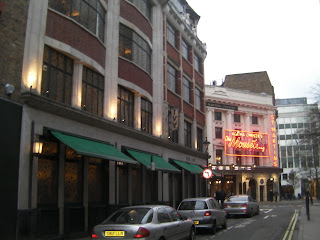 Back to Charing Cross and you’ll find a row of second hand bookshops, including Any Amount of Books and Henry Pordes. Victoria and I have spent many a dusty hour amongst their stacks and enjoyed every moment of it. 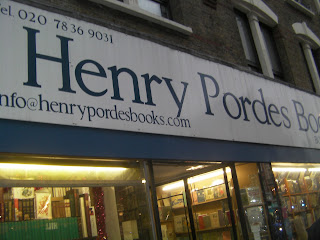 And always, there are the pubs. You just about fall over them. Below is the Porcupine in Great Newport Street. 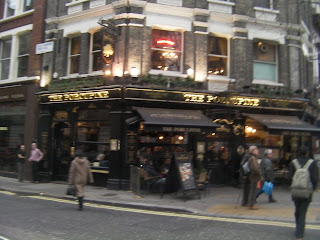 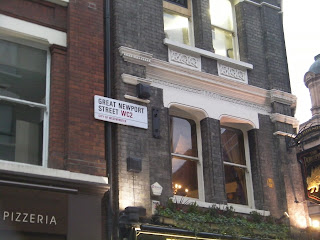 Turn towards Leicester Square and you’ll arrive at the gates to the entrance of London’s Chinatown. 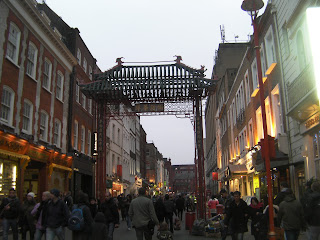 Where I have to admit Brooke and I have enjoyed many a roast duck. Yummmm. 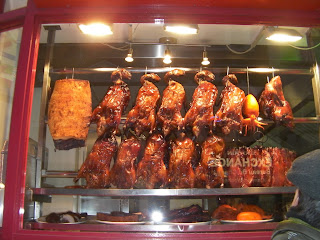 You’ll see Chinese characters at the bottom of the street sign below. 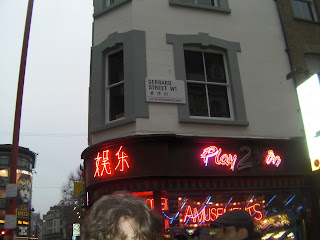 And finally there’s Compton’s in, where else, Old Compton Street. It was once the Swiss Hotel and is currently a mostly gay bar. You can read more about it here. No matter what goes on inside, the outside of the building is quintessentially British, not to mention gorgeous. 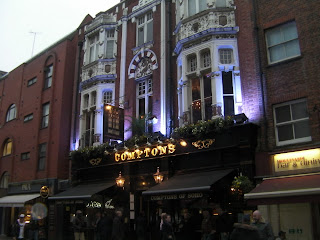 I hope you’ve enjoyed our stroll as much as I have! 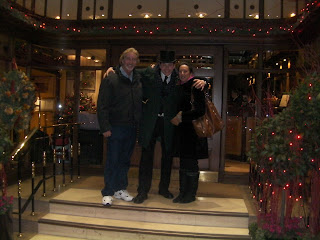 You’ve got to love a city in which you trip over history with every step. A simple stroll through London affords many glimpses of the past, beginning on your own doorstep. Case in point, the photo above – that’s Greg and I with Nathan, the world famous doorman at the Rubens Hotel in Buckingham Palace Road. Go down the steps and turn around and you’ll find the plaque below, stating that the Rubens was used by General Sikorski during WWII as his headquarters. 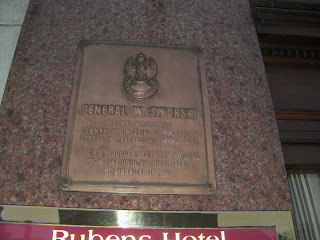 Directly across the street from the Rubens you’ll find this view of the Royal Mews. 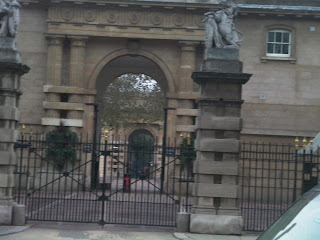 Look to your left and you’ll see the Bag O’ Nails pub. 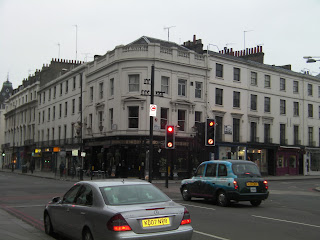 One day, I left the hotel on my own and made my way towards Piccadilly, passing Buck House on the way. 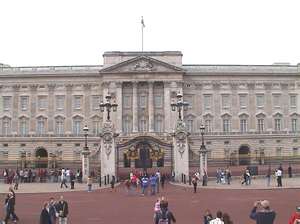 Then I headed down the Mall, where I passed Clarence House, home to Prince Charles and Camilla. 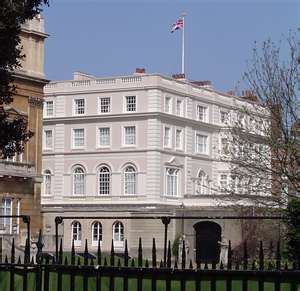 At the corner, I turned left and a quick stroll brought me to St. James’s Palace 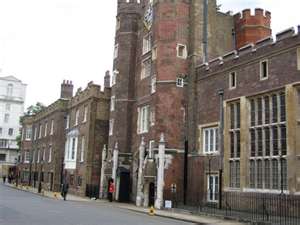 Heading north, I entered St. James’s Street and looked in the windows at Lock’s Hatters and various other long standing shops until I found myself, once again, in front of the bow window at White’s Club. 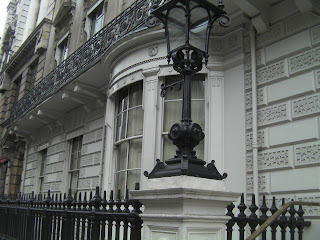 At the corner of Piccadilly, I made a right and walked past the windows at Fortnum and Mason, which this year recreated iconic paintings in 3D renderings, below. You can read all about the process here. 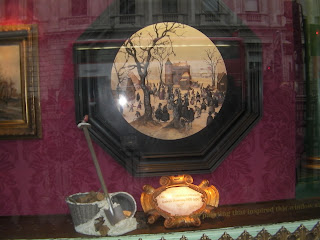 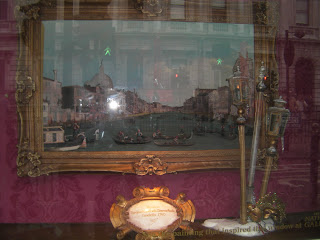 I browsed F and M, and Hatchard’s book shop, and various nearby streets before returning to Piccadilly for tea at Richoux, one of my regular haunts just opposite the Royal Academy. You can visit their website and check out their menu here. 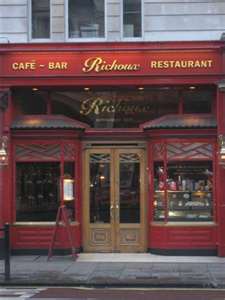 On another day, and another stroll, Greg and I headed to Charing Cross Road, where at No. 103 (below)you can find the vestiges of the Tam O’ Shanter Pub. A public house called the Bull’s Head stood on this site from at least 1759 until 1893. At the time of the opening of Charing Cross Road in 1887 the building was enlarged and repaired to the designs of R. W. Read and its name was changed, firstly in 1894 to the Tam o’Shanter, and again in 1900 to the Palace Tavern. It ceased to be used as a public house in 1960, and is now occupied by a firm of caterers 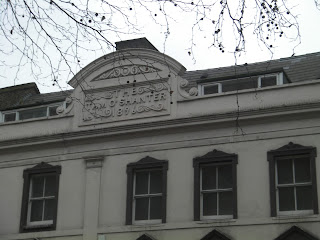 Just at the corner with Old Compton Street, you’ll come across Molly Mogg’s (below), one of the smallest pubs in London. 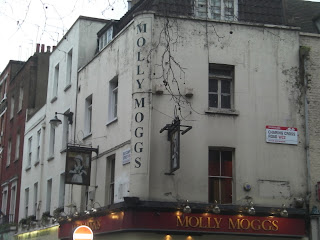 I’m using one of those crazy european keyboards in the private airport lounge so excuse the many typing errors you might find in this post., We have the lounge all to ourselves just now, sitting looking out at the planes on the runway, drinking complimentary rum and cokes at 10:40 a.m. in my case, I’m drinking in the hopes that the rum will mitigate my desolation at having to leave home. greg’s drinking in the hopes that it may help his back over the next 11 hours. in any case, we’re already as good as gone from london. And yes, dear Reader, whilst Greg has no idea (the poor sod) I’m already formulating ideas for my return. In fact, I’m thinking that maybe the next time I return, some of you will be with me. And Victoria. How does a Number One London tour to England sound? Sounds a bit of alright to me, but let me know your thoughts on the idea. Right then, off for another snort, a few tears and then to board. Sigh.  P.S. as you see, I’ve already broken one of my resolutions below by not waiting a month to plan my next trip to merry old. I told you I’m no good at this resolution thing.

After the Rock and Roll tour, took a cab to Ye Olde Cheshire Cheese for dinner – again. And even though the concierge had called before hand, they were closed – again. Many others had shown up, too, with no joy. So off to steak house for dinner (porterhouse) and now back in the room, where I already did most of the packing. Went down to bar and brought up a lovely snifter of Hennessy brandy and am having one of the best NYEs ever – watching Mr. Bean on telly, the Royle Family Christmas Special on BBC iplayer, the Fireworks from Dubai and now Coronation Street. You have got to love it. Up early tomorrow for breakfast and then to airport at 9:30. Greg has no idea yet, but I’ve checked us in to the private lounge at the terminal, which should make our wait a bit nicer. Think of me tomorrow, on the plane for 11 and a half hours. I’ve brough my Nook, a real paperback and my needlepoint kit that I just bought, so should well occupied with those and the in flight entertainment. I am bereft at having to leave. Until next time, I’ll just have to close my eyes and think of England. Happy New Year to all. Will be doing longer posts of the points of interest I’ve mentioned in past trip blogs next year, which is now only 3 and a half hours away. Or 8 hours away for you in the States. Cheers!

Quick marched there and back – don’t worry, I took lots of snaps for you along the way. Okay, here’s the deal – I’m commandeering the Piccadilly Drawing Room as my bedroom and the adjacent Portico Drawing Room as my . . . drawing room. Lovely views over the Wellington Arch and room enough outside for a balcony. Happy to say that Apsley House was packed with visitors. By the time I arrived, there were no more audio tour handsets. I told the man not to worry, I was probably the one visitor there who didn’t need one. Off now to Tottenham Court Road tube station to catch the Rock and Roll tour. . . .