What is more magnificent than Chatsworth House? How about a fashion exhibition of clothing shown in the very rooms in which they were worn?

The exhibition House Style: Five Centuries of Fashion at Chatsworth was on show and we felt really fortunate to see all these wonderful garments long stored away, in most cases. 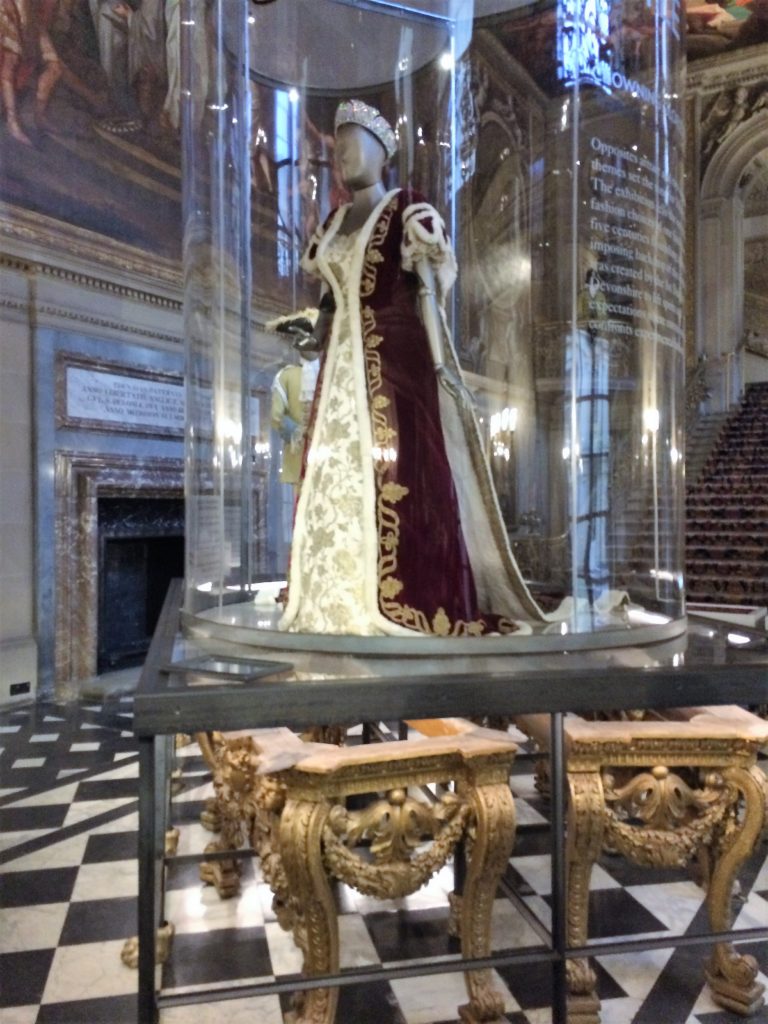 Many other treasures are permanently on display at Chatsworth, not to mention the art, gardens, restaurants and shops which delighted us.

The Cavendish family and Dukes of Devonshire descended from the marvelous Elizabethan lady known as Bess of Hardwick.  At age 70, after surviving four husbands (Cavendish was #2), and assisting her fourth husband, the Earl of Shrewsbery, in holding Mary Queen of Scots under house arrest for many years, Bess built herself one of the finest “prodigy” houses of the age.

Architect Robert Smythson designed Hardwick, one of England’s earliest structures in the Renaissance style.  Bess chose the sight on a high hill next to the Old Hall, which is partially in ruins today.

Huge windows bring light into the rooms, astonishing her contemporaries.  Despite  her age of 70 years, Bess lived here for about ten  years, dying in 1608.   The property was left to her son William Cavendish, 2nd Earl of Devonshire. Among the treasures in the house are fine portraits and excellent tapestries, shown under reduced illumination for their protection. 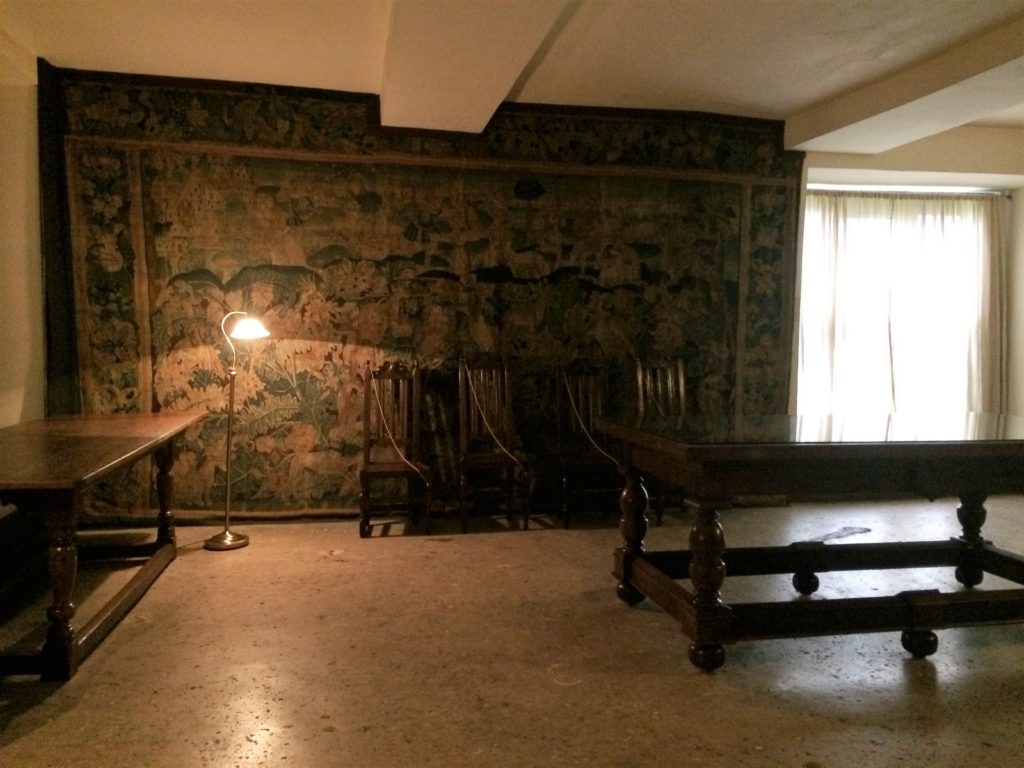 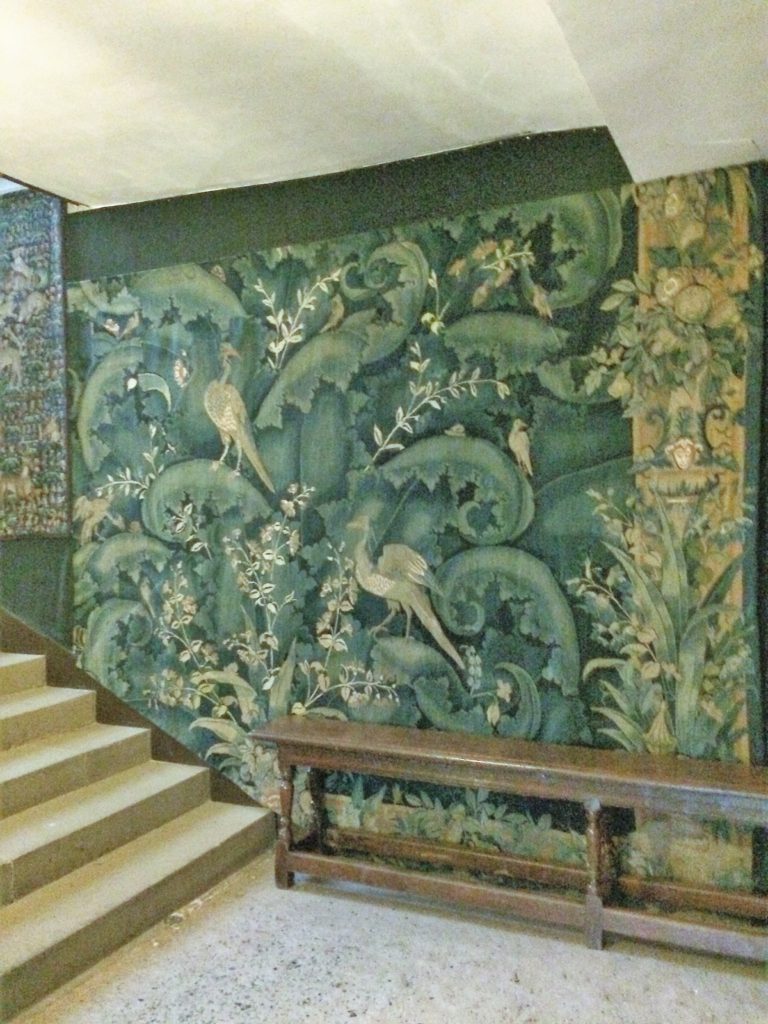 We made a quick stop at the ruins of Sutton Scarsdale, a fine Georgian mansion now roofless and in ruins, in order to appreciate the state in which some houses are in when they are handed over to the National Trust, English Heritage or a civic or government body.  Built in 1727, the house contents were auctioned in 1919.

The estate is owned by English Heritage, which is in the process of conserving some of the remaining plasterwork and other features. It is a sad reminder that houses such as these may be lost forever unless they are funded and maintained by governments or heritage organizations.

Though the whereabouts of most of the contents are are unknown, at least one room has been recreated and adapted at the Philadelphia Museum of Art, probably a reception room from the ground floor.

Our final day with Number One London Tours in 2017 was spent at Tatton Hall, another Georgian house, this time carefully cared for.  I neglected to get around to the front for a photo, but here is an excellent replacement.

We ended our visit with tea at the Gardener’s Cottage, sad that our visit was almost at an end, but already looking forward to our next Number One London Tour. 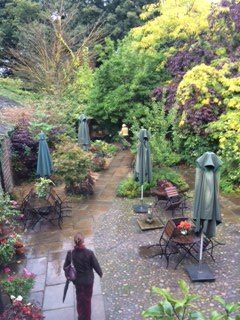 This is how I felt for almost the entire 2017 Number One London Country House Tour. I love visiting English Stately Homes and this Tour offered a stellar variety of periods, architectural styles, and decorative arts. Plus, our group was remarkably compatible and full of historical curiosity. We had great food, accommodating drivers, fun hotels, etc. etc. etc.  Only thing I wished for was more energy!!!

See how our first hotel’s wall recognized our goals! 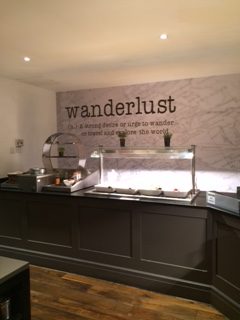 Our first stop was one I had been eagerly anticipating for several years.  Wentworth Woodhouse has only recently opened to the public. As you  can see from the pictures of the south facade, you have to get back a long distance to photograph the entire house, and this is only half of it.

Said to be the largest private residence in Europe, Wentworth-Woodhouse in fact is two houses joined. The earlier west-facing house was begun by the 1st Marquess of Rockingham in the 1720’s in mellow red brick in the baroque style. A few years later, the same Marquess chose to build an even larger house, the east facade, constructed of sober grey stone in the Palladian style.

Recently WW, as I will refer going forward to Wentworth Woodhouse to save my fingers, has been seen in several films and on television.  In Episode One of Season Two of Victoria, the scenes of the royal couple reviewing the regiment were staged in front of WW. 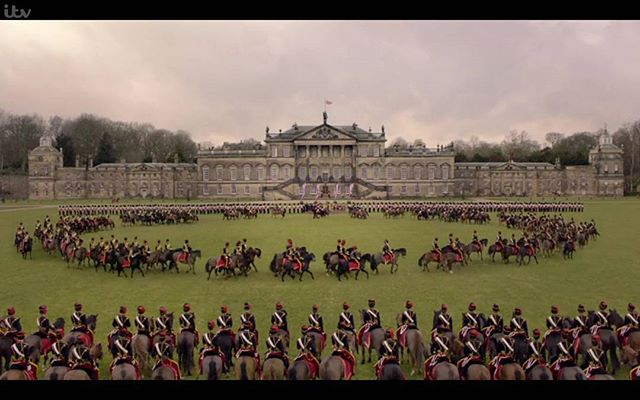 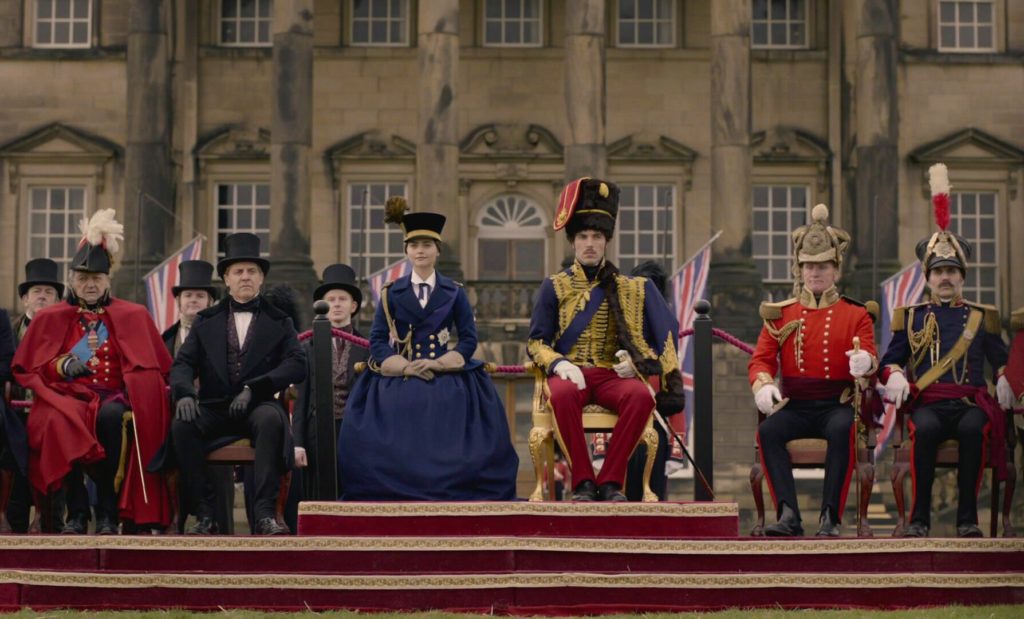 I will relate the full story of WW soon, and a long complicated tale it is.  For the time being, just know that touring it was fascinating. Recently, the estate has been acquired by a Preservation Trust after many years as a school and then standing empty and abandoned for some time. Fortunately, the Trust will preserve and restore the house and the gardens.

We entered on the ground level, to find a great forest of pillars, cleverly named the Pillared Hall. 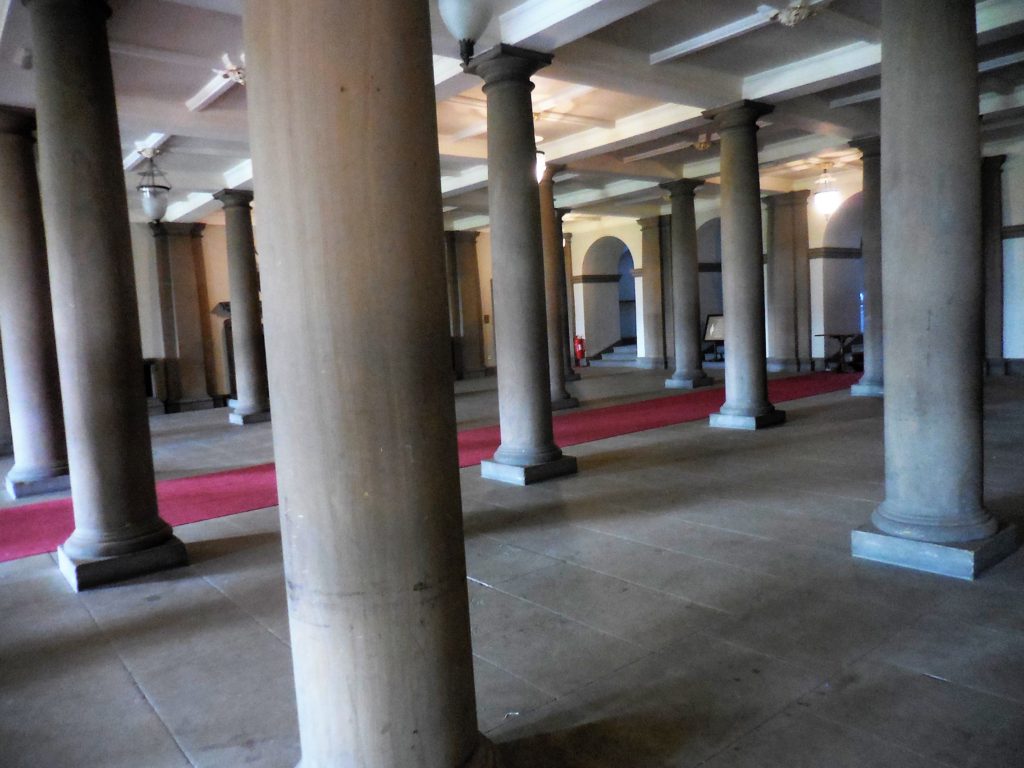 And a noble staircase leading to the Piano Nobile, that is, the State Rooms. 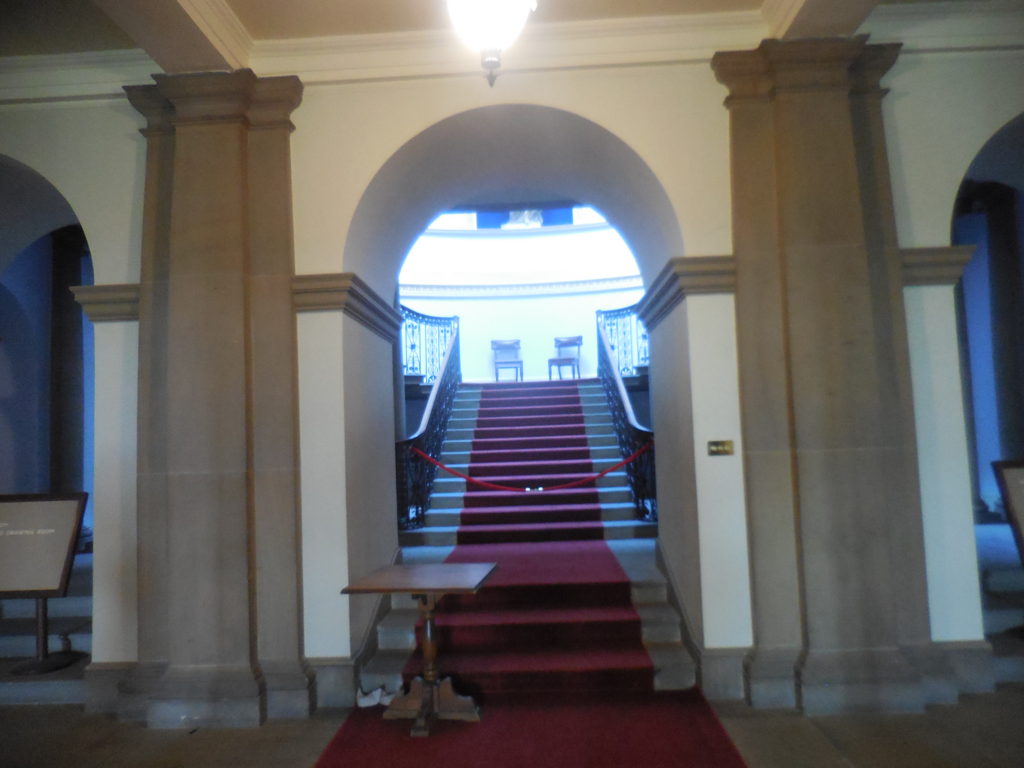 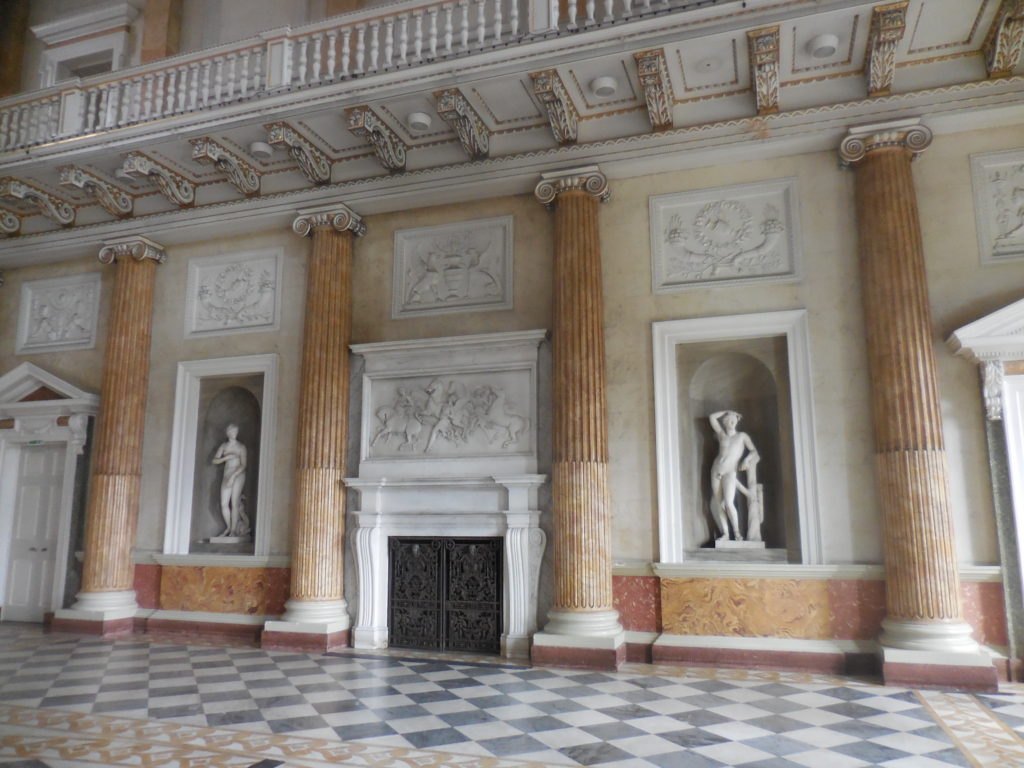 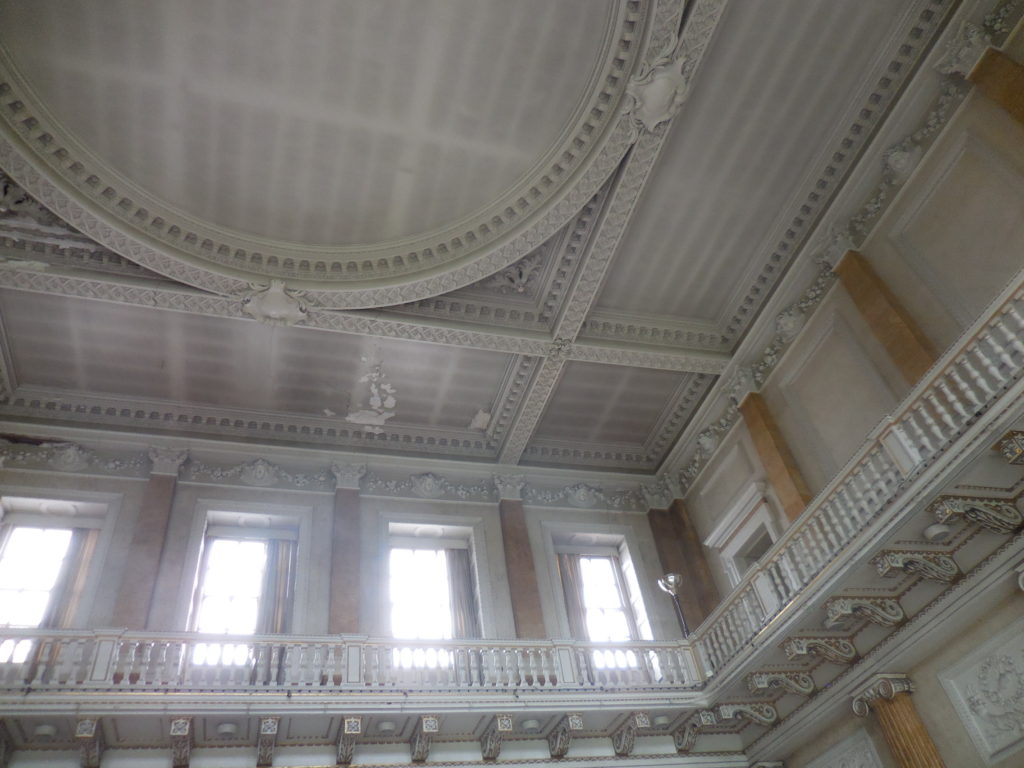 It is easy to see why there are so many pillars holding up this vast room, which was used for all sorts of gatherings, as a grand ballroom, as a gymnasium for the women’s college, and it also stands in for Buckingham Palace in the film Darkest Hour.

Most of the rooms are now empty, previous furnishings sold, stored, or lost.  WW is a venue for business meetings and weddings, with the facilities able to accommodate either intimate gatherings or a virtual mob.

The gilded walls of this room once held the famous 1762 painting by George Stubbs of Whistlejacket, a champion racehorse owned by the 2nd Marquess of Rockingham.  Sold to partially fulfill death duties, the canvas now hangs in London’s National Gallery, where I had visited at the beginning of my trip. The version at WW is a  copy.

I will close with three views of the extensive gardens, which are being restored after wholesale destruction for strip mining of coal. Next time I will cover, more briefly, other houses we visited on Number One London’s 2017 Country House Tour.

James Boswell is best known as the biographer of Dr. Samuel Johnson, but he was also 9th Laird of Auchinleck, in Scotland, with the family seat being Auchinleck House, in Ayershire, below, since it was built circa 1760. Boswell visited often and he and Dr. Johnson stayed here together in 1773 during their return from the Hebrides. As it turns out, a small group of lucky travelers will be staying here and we’ll have the entire estate to ourselves during Number One London’s 2018 Scottish Writer’s Retreat in September. Can there be a more perfect location for a writer’s retreat than the home of the author commonly said to have written the greatest biography in the English language – or the man who spent nine years working on The Dictionary of the English Language?

In light of my upcoming stay, I thought it would only be fitting for me to brush up on my Boswell/Johnson knowledge by re-reading Boswell’s Journals and Christopher Hibbert’s excellent biography, The Personal History of Samuel Johnson. 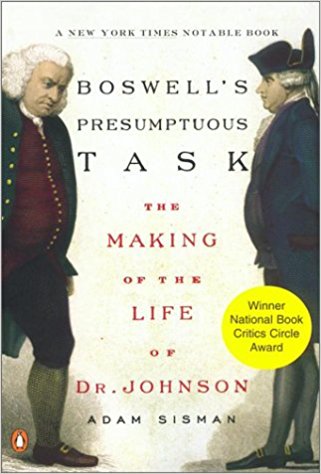 Also on my reading list is Adam Sisman’s book, Bowell’s Presumptuous Task, which garnered this review by Bibliomane01 on Amazon:

“In this magnificent work Mr Sisman describes the making of that greatest of all biographies, Boswell’s Life of Dr Johnson. To his contemporaries the task that Boswell had taken on was presumptuous indeed – to record the life of the greatest literary man of his age, while being dismissed himself as a frivolous and reprobate dilettante incapable of any serious activity. Well, the world knows that Bozzy succeeded in confounding his critics, but the tragic irony of his predicament was that he succeeded too well. While hailing the book as a masterpiece, the current and future literary establishment dismissed Boswell’s own role as little more than that of a stenographer. Macaulay’s damning essay on Boswell formed the opinion held by too many people for far too long. The true story of Boswell’s genius became well known to scholars in the 20th century; with this book, Mr. Sisman brings the story to a wider audience. It is a remarkable portrait of Boswell’s love for Johnson and the great struggles he endured to bring his hero to life in the pages of his biography. Battling drink, debauchery, depression and his own self-destructive nature, Boswell managed to pull off the one great sustained piece of effort of his life. In his book Johnson was brought to life once again, an image so convincing that it took over 150 years for people to discern the art behind the apparent ingenuousness of Boswell’s technique. Sisman does a good job of showing how the Johnson of the Life was as much a product of Boswell’s gift as the historical record (although I think readers would have benefited from a few examples of textual analysis to illustrate this). His final chapter on the gradual unearthing of the Boswell papers provides an exciting ending and his writing is clear and compelling. “Boswell’s Presumptuous Task” is nothing short of a triumph.”

The “gradual unearthing of the Boswell papers” mentioned above refers to a cache of Boswell’s private papers and journals found at Malahide Castle just outside of Dublin in the 1920’s. Boswell’s great-great-grandson, Lord Talbot de Malahide sold the papers to American collector Ralph Isham and they now form part of the collection at Yale University. Having only just visited Malahide Castle in September, I’m looking forward to reading Sisman’s book soon.

If you’d like to join us on The Scottish Writer’s Retreat, you will find complete details here – there are only two places remaining!