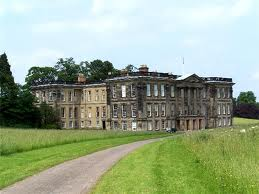 The National Trust presents Calke Abbey as an illustration of the English country house in decline. Displays show how house was left when abandoned in the 1920’s and the NT refers to the property as an “unstately home.”

From Wikipedia: “Set in the midst of a landscape park, the National Trust presented Calke Abbey as an illustration of the English country house in decline. A massive amount of remedial work but no restoration has been done and interiors are almost as they were found in 1985 so the decay of the building and its interiors has been halted but not reversed. Before the National Trust work of the late 1980s everything had remained untouched since the 1880s. The Trust manages the surrounding landscape park with an eye to nature conservation. It contains such features as a walled garden, with a flower garden and a former physic garden, now managed as a kitchen garden. Some years after Calke was handed over to the National Trust to settle death duties, an heir was discovered: Andrew Johnson, a distant cousin of the Harpur family. Johnson was a wealthy resident of Vermont and the owner of important stands of timber and of a lumber business, though the popular press in Britain referred to him as a `lumberjack.’ Johnson was given the use of an apartment in the Abbey, which he and his family have used on occasional visits.”

And from The History of the County of Derby, Part 2 (1829) by Stephen Glover: “In this house, although it has never yet been put up, either for use or ornament, is, perhaps, one of the most splendid state beds in the kingdom, presented, on the occasion of her marriage,-by ” Caroline,” queen of George the Second, to Lady Caroline Manners (afterwards Harpur) as one of her bridemaids. This now beautiful seat was, in the memory of persons n6w living, one of the plainest and least ornamental, it is said, almost desolate and ugly, places in the county. The present improvements were all planned and executed by the late Sir Henry Crewe, bart. who devoted a life of retirement to this purpose, affording thereby, for many years, ample employment to the workmen and labourers of the surrounding neighbourhood. The house being ill supplied with water, Sir Henry Crewe, at a great expense, brought it from an excellent spring beyond Ticknall, about a mile and a half, to a covered reservoir in the park, from whence the stables, house, gardens, and dairy, are now fully and amply supplied. The style of architecture is Ionic, highly enriched, with fluted pilasters between the windows, and an elegant balustrade round the whole building, within which is a flat roof covered with lead. The stables are excellent, and stand on an elevated site to the north of the house.” 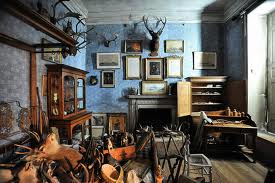 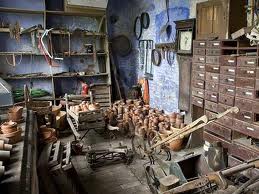 The Potting Shed at Calke Abbey from natures-desktop.com 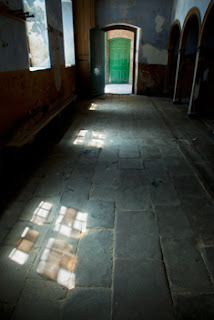 Copyright goingdigital.com
All of this sounds vastly intriguing and Victoria and I are loathe to admit that neither of us has yet visited Calke Abbey. Have you? ﻿If so, please share your visit with us. And in the meantime, Victoria and I have yet another stop to put on a future itinerary.