The next stop on our Christmas pilgrimage through the stately homes of England is Haddon Hall which is located near the River Wye in Derbyshire. The original house was built in the 11th century and additions were made in the 13th and 17th centuries. The house is considered one of the finest examples of a Tudor manor house in existence. It was once the family seat of the Dukes of Rutland and is currently the home of Lord Edward Manners and his family, brother to the current duke.

The exterior and many of the interior rooms of Haddon Hall have been used in numerous films and television programs. It is most easily recognized as the location of Prince Humperdinck’s castle in The Princess Bride ! However, it has also been used in various versions and adaptations of Jane Eyre and was used in the 2005 film version of Pride and Prejudice.

I cannot begin to imagine the fun it would be to decorate a Tudor manor for Christmas, but here are some photos to fill all of our Christmas dreams! 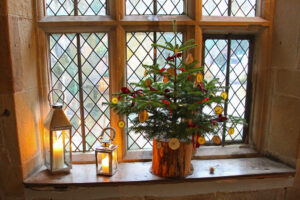 The natural decorations are a tribute to Haddon Hall’s Tudor heritage. Can’t you almost smell the oranges and the cinnamon?