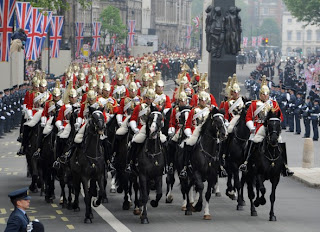 As we recently ran a post about a Household Calvary horse named Sefton, we thought it would be appropriate to look into the Duke of Wellington’s connection to the Household Calvary, a term used to describe the cavalry of the Household Division, the most elite senior military groupings or those military groupings that provide functions associated directly with the Royal Family. The British Household Cavalry is made up of two regiments of the British armed forces, the Life Guards and the Blues and Royals (Royal Horse Guards and 1st Dragoons). These regiments are divided between the Armoured Regiment stationed at Combermere Barracks in Windsor and the Household Calvary  stationed at Knightsbridge Barracks, London.
The first Regiment with whom the Duke of Wellington was connected was the Royal, or 1st, Dragoons, who served under Wellington, as Lord Wellesley, during the Peninsular War. They acted as rearguard during the retreat at the Torres Vedras lines in 1810 and their charge at Fuentes d’Onor in 1811 contributed greatly to that victory. By the end of 1814, the Royal Dragoons had advanced into southern France and were granted permission to march through France to Calais.
In 1815, their successful charge at Waterloo alongside the Union Brigade was responsible for maintaining the Allies’ weakest position until the Prussians arrived. The famous charge against the French Cuirassiers took place at the height of the battle and saved the British centre from being overrun. During this charge, the 105 Eagle, now part of the The Royals’ and The Blues dress, was captured from the French 105th Infantry Regiment of the Line by Captain Clarke and/or Corporal Stiles. 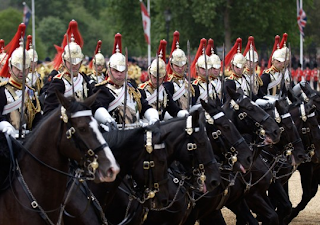 However, the Duke of Wellington is most closely connected to the Royal Horseguards, also called The Blues. He was appointed as Colonel of the Regiment on 1st January, 1813, which proved to be the first step towards raising The Blues to the distinction of belonging to the Household Calvary. Wellington was the first Colonel to take office as Gold Stick with the colonels of the 1st and 2nd Life Guards, regiments with whom The Blues fought at the battle of Vittoria. 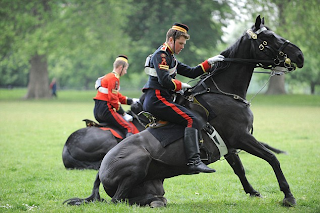 The Blues formed the Heavy Cavalary Brigade at Waterloo, fighting alongside the 1st and 2nd Regiments of Life Guards. At the beginning of the Brigade charge, the Regiment was in support, but as the charge unfolded, they drew into the first line. After the battle, the following equine casualties were reported: 48 killed, 21 wounded and 25 missing.
In 1821, King George IV ordered the Regiment to be brigaded with the 1st and 2nd Life Guards and to share the duties of the King’s Life Guard.
Today, the Household Cavalry continue to guard the monarch, appearing daily at the Changing of the Guard at Buckingham Palace. Fittingly, the Viewing Galleries within the Wellington Arch, in front of Apsley House, offer unique views of the Household Cavalry passing beneath the Arch on their way to and from the Changing of the Guard. The Arch opens daily at 10 a.m., with the Guards usually passing at around 10:30 a.m.

2 thoughts on “The Wellington Connection: The Household Calvary”