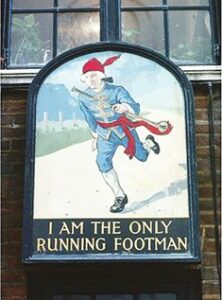 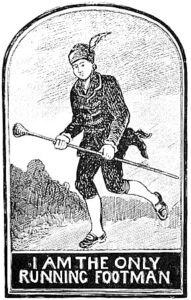 I AM THE ONLY RUNNING FOOTMAN

And the award for the longest name for a pub goes to… These days it is known as The Running Footman or simply The Footman. One of the oldest pubs in London, it was originally called The Running Horse. In this guise it was frequented by the city’s footmen in service to the aristocratic houses in Mayfair. 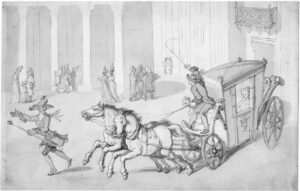 In 17th and 18th century London there were footmen and then there were running footmen. Especially in the 17th century, the streets of London were narrow, overcrowded and apt to be blocked by carts, animals, pedestrians, and any number of other obstructions. It was the job of a running footman to run ahead of his master’s coach clearing the way and paying any tolls at bridges and toll gates ahead of the coach’s passage. At night the running footman might run head carrying a lamp to light the way.

In typical aristocratic fashion, the men who employed running footmen loved to pit theirs against those of other households in foot races upon which they would place ridiculously expensive wagers.

From the diary of Samuel Pepys:

‘The town talk this day is of nothing but the great foot-race run this day on Banstead Downs, between Lee, the Duke of Richmond’s footman, and a Tyler, a famous runner. And Lee hath beat him; though the King and the Duke of York and all men almost did bet three or four to one upon the Tyler’s head.’

After the Great Fire (1666) the streets of London were widened and made clearer. Eventually the need for running footmen dwindled. Most households simply repurposed their running footmen to serve as carriage escorts and to run messages and letters from household to household. Everything from invitations to illicit love letters often pass through the hands of these footmen.

They did continue to congregate at The Running Horse where they commiserated about demanding employers, stingy tippers, and other travails of working in service. And, of course, every bit of gossip imaginable was passed around this haven for London’s footmen. Imagine the intrigue and news a man might acquire as he traveled from house to house in the erudite and aristocratic households of Mayfair. If those walls could talk now! 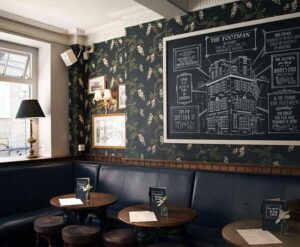 When the pub was put up for sale in 1749, one of the last men employed as an actual running footman retired and bought the establishment. He promptly renamed it after himself and catered to his fellow former runners and to the footmen employed in the wealthy houses of London. It served as a gathering place for these young men well into the early 20th century. 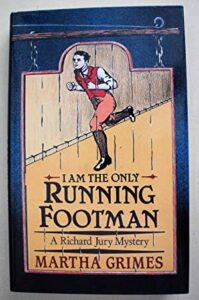 The pub is even memorialized in the title of one of Martha Grimes’s Richard Jury mysteries. Nothing like having the body of a murdered girl found outside a pub to attract mystery fans and the morbidly curious.

Today the pub is known for excellent cuisine and a more upper crust atmosphere. The Georgian bowed window remains and whilst the pub has been remodeled a few times since 1749 those brick walls have stood the test of time. As does the long moniker and perhaps the muttering voices of those young men who knew every little secret of London’s 18th and 19th century elite. 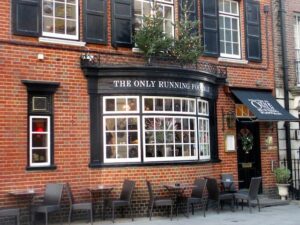 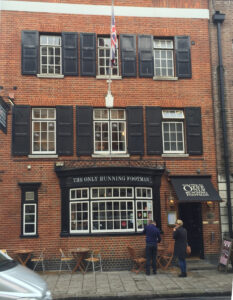