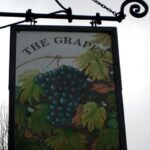 THE BUNCH OF GRAPES

This post is the first in what I intend to be a series of posts on some of the historic pubs in London and throughout the UK. I realize that the phrase “Historic Pub Crawl” could actually have two meanings. I intend it to mean visits to historic pubs. However, it could mean a series of visits to pubs one after another that ends up being a historical event. If you know the motley crew associated with Number One London, you know any trip we take can and usually does end up being a historic event. But I digress. 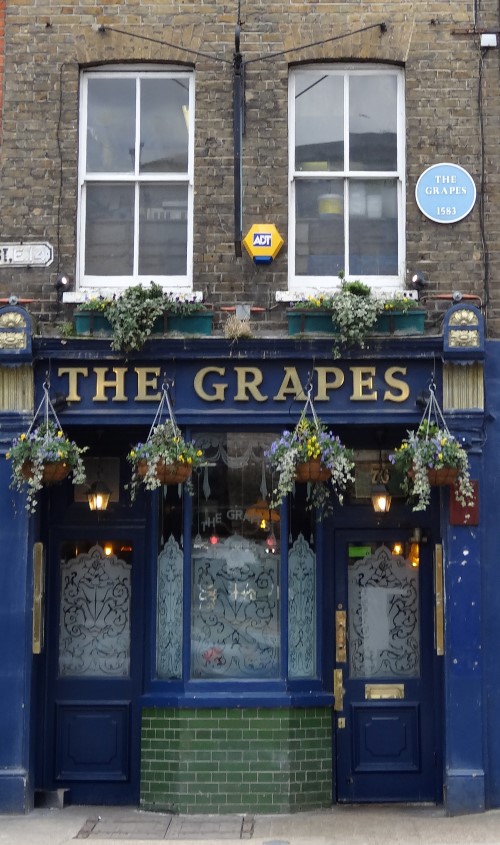 Although the current name of the pub is simply The Grapes, a tavern of some sort or another has stood on the present site for almost 500 years. And for most of those years it was known as The Bunch of Grapes. The first tavern was built on this spot in 1583, but the current building dates from 1720. Imagine the history it has seen, surviving the Blitz during World War II, and still operating as a pub to this day.

I will confess I first discovered this fascinating pub whilst I did research for my novel, A Study in Passion. My heroine had to visit a Chinese apothecary in search of aid for her pet pangolin. In the eighteenth and nineteenth centuries, the Limehouse area of London was home to England’s largest Chinese community. Not surprising when one realizes much of the Chinese community in London was made up of sailors and tradesmen from the many ships bringing in goods from the Far East and their families. They left the East India Company ships coming into the Limehouse Dockyards and established every sort of business from apothecaries to trading and import companies to boarding houses, to yes – opium dens.

Before the pub was built the location was in proximity to lime kilns, customs houses, docks and shipyards. By the Elizabethan Era Limehouse was established as the doorway to world trade in London as most of the ships embarking on trade trips across the British Empire left from these docks. Supposedly, Sir Walter Raleigh set sail on his third voyage to the New World from a spot just below the Bunch of Grapes. 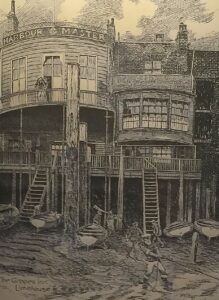 The pub’s greatest claim to fame may well be its thinly veiled description used in the first chapter of the novel Our Mutual Friend by Charles Dickens. Again, not a surprise as Dickens was said to be a frequent visitor to the pub in the 1820’s when he visited his godfather who lived in Limehouse. 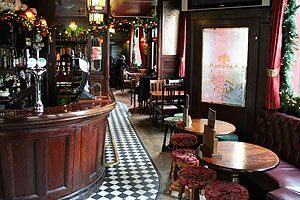 “A tavern of dropsical appearance… long settled down into a state of hale infirmity. It had outlasted many a sprucer public house, indeed the whole house impended over the water but seemed to have got into the condition of a faint-hearted diver, who has paused so long on the brink that he will never go in at all.”

A rather more sinister aspect of the history of The Bunch of Grapes associates it with the watermen who operated ferry services on the Thames for both passengers and freight. Because of the stringent rules against dissection and obtaining corpses for same, a great deal of supplemental income might be made by providing London’s medical schools, anatomists, and physicians with fresh corpses. Apparently these watermen would lurk about the back stairs of The Bunch of Grapes and drag inebriated customers down said stairs to drown them in the Thames before taking them by boat to their waiting customers.

Note to the characters in my Regency romances: Do not leave The Bunch of Grapes by the back stairs if you have indulged in too much drink.

Note to those who wish to visit The Grapes today: If at all possible visit on a Monday as the current owner of the pub, Sir Ian McKellen, has been known to run the pub quiz on Mondays from time to time.