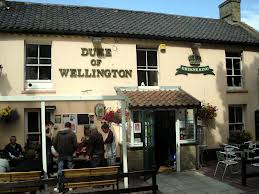 Once upon a time in England, an alehouse/tavern licence was very expensive and was based upon the size of the premises. Many who sought to open such an enterprise were financially prohibited from doing so until the Duke of Wellington’s Beer House Act of 1830 changed the playing field dramatically. The Act reduced the licence fee to two guineas, permitting the sale of beer and cider only. The main object of the Act was to reduce the consumption of spirits, such as gin and other strong liquors.

As the website Exeter Memories tells us: “During the 18th-century, the production and consumption of gin exploded, especially amongst the poor, causing violence and misery for many. Government attempts to prohibit the production of gin with the Gin Act of 1736 had little effect. Distilling changed from straight gin to “medicinal” spirits to circumvent the Act, and fanciful names such as Cuckold’s Comfort and My Lady’s Eye Water were used to describe the new drinks. 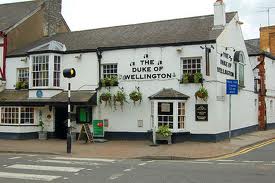 “The introduction of the Beer House Act of 1830 tried a different approach to reducing gin consumption and hence, public drunkenness. Anyone, on payment of 2 guineas to a magistrate could obtain a license to open a beer house. Permission was only granted for six days a week, with Sundays excepted. Only beer and cider could be sold.

“The result was a huge growth of beer houses and beer sellers, many from the front rooms of terrace houses and cottages. Another provision of the act was that existing taverns, inns and pubs could also brew their own beer on the premises. This had a knock effect, for there was a growth of demand for hops and barley for malting, thus bringing a new market for many farmers. Within eight years of the act being passed, 46,000 beer houses were opened, almost equalling the number of existing, pubs, taverns and inns.” 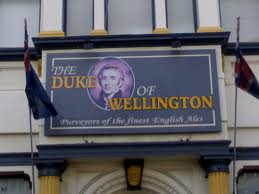 Midlands Pubs picks up the story from there – “Following the 1830 Act, beer production went through the roof. Large common brewers engaged travelling sales people to find new trading locations. These agents actively encouraged householders to open up a part of their property, usually the front parlour, in order to sell beer. They even offered to pay the two guinea licence on their behalf and would offer credit terms to their clients.

“Many of the new beer houses throughout the land named their pubs in honour of the Iron Duke. Their pub signs tended to display Wellington in his military roles and often celebrated his battle achievements that had captured the imagination of the public. However, more often than not, the new publicans were showing appreciation to the man who had helped them set up in business. Not all houses bought their beers from common brewers. Some chose to brew themselves whilst others employed a travelling brewer who would go from pub to pub producing the house ales. 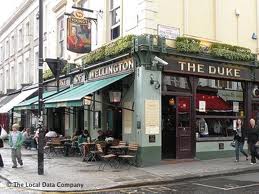 “Naturally, some beer houses were more successful than others. Those who gained a reputation for their ales enjoyed good trade. The licensee would often use the profits to buy the neighbouring cottage into which the family would move whilst the existing house was expanded. Indeed, there are some pubs that have expanded into a full row of a terrace, the rooms being used as separate bar, parlour, smoke room, lounge and family room. The early beer house movement was all very laissez-faire.
“Although many beer houses were eradicated under later legislation, many survived and evolved into fully licensed premises. Accordingly, in addition to beer and cider, they were allowed to sell wines and spirits. 1869 was a key cut-off point, after which it was not so easy to obtain a full licence. Indeed, the 1869 Wine and Beerhouse Act was designed to curtail the number of pubs that were opening around the country. However, pubs that had obtained licences before this date did have a degree of protection in terms of magisterial control. 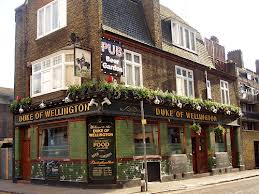 “Many houses that did not obtain a full licence managed to continue in business providing that the house conformed to all legislation and was kept orderly. These continued to simply sell beer and cider. For example, by 1890 almost half of Birmingham’s 2,178 public houses were beer houses. In fact, beer houses continued up until the 1950’s when finally a full licence was granted to those that had survived.”
The Duke of Wellington . . . what a guy!

1 thought on “The Wellington Connection – Beer”