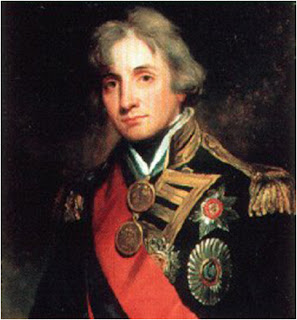 Horatio, Lord Nelson and the Duke of Wellington met but once in their lives and, thanks to diarist John Wilson Croker (The Croker Papers), we have an account of that meeting, in Wellington’s own words. The following account was told to Croker whilst he was visiting the Duke at Walmer Castle on October 1, 1834. The Duke’s telling of the story was prompted by a question put to him by Croker concerning Nelson’s reputation for egotism and vanity –

“Why,” said the Duke, “I am not surprised at such instances, for Lord Nelson was, in different circumstances, two quite different men, as I myself can vouch, though I only saw him once in my life, and for, perhaps, an hour.

“It was soon after I returned from India. I went to the Colonial Office in Downing Street, and there I was shown into a little waiting-room on the right hand, where I found, also waiting to see the Secretary of State, a gentleman whom, from his likeness to his pictures and the loss of an arm, I immediately recognized as Lord Nelson.

“He could not know who I was, but he entered at once into conversation with me, if I can call it conversation, for it was almost all on his side, and all about himself, and in really a style so vain and so silly as to surprise and almost disgust me. I suppose something that I happened to say may have made him guess that I was somebody, and he went out of the room for a moment, I have no doubt to ask the office-keeper who I was, for when he came back he was altogether a different man, both in manner and matter. All that I had thought a charlatan style had vanished, and he talked of the state of this country and of the aspect and probabilities of affiars on the Continent with a good sense, and a knowledge of subjects both at home and abroad that surprised me equally and more agreeably than the first part of our interview had done; in fact, he talked like an officer and a stateman.

“The Secretary of State kept us long waiting, and certainly for the last half or three quarters of an hour I don’t know that I ever had a conversation that interested me more. Now, if the Secretary of State had been punctual, and admitted Lord Nelson in the first quarter of an hour, I should have had the same impression of a light and trivial character that other people have had, but luckily I saw enough to be satisfied that he was really a very superior man; but certainly a more sudden and complete metamorphosis I never saw.”