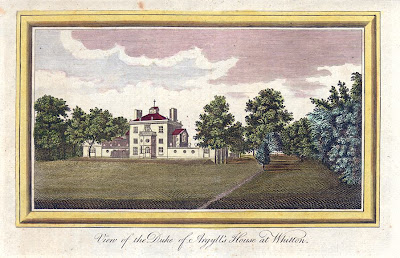 England has always been a land of gardens and gardeners and so we thought it appropriate to begin a few posts which deal with the subject. Of course, if you’re going to garden you are going to need plants. One of the most respected and most successful nursery gardens was that of Messrs. Lee, of Hammersmith, one of the oldest in the neighbourhood of London, which survived until the early part of the 20th century. 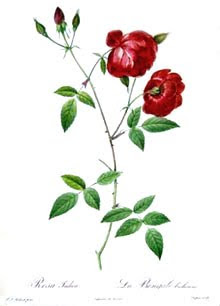 Mr. James Lee, who established the nursery, was born at Selkirk in 1715. When he first came to London he was employed at Syon, and afterwards at Whitton (pictured above), by the Duke of Argyll. About the year 1760 he entered into partnership with Mr. Lewis Kennedy, gardener to Lord Bolton, at Chiswick, and commenced a nursery, in what was called The Vineyard, at Hammersmith. About the middle of the 18th century, the vineyard was producing a considerable quantity of Burgundy wine each year. A thatched house was built in the grounds; with wine cellars beneath. Mr. James Lee and his partner took it and established a most successful Horticultural Nursery, remarkable for obtaining from distant countries everything rare and  beautiful to be obtained. They maintained collector at the Cape of Good Hope, and another in America and enjoyed world-wide celebrity. Every known, rare, or new plant could be obtained there. They once received a letter addressed, “Lees Nursery, England” which reached them readily. They were the first to obtain a China rose (right) in 1787. These roses changed the cultivation of roses in many ways, including the fact that they broadened the scents of roses, new blends becoming apparent as they were hybridized with other roses, such as damasks. 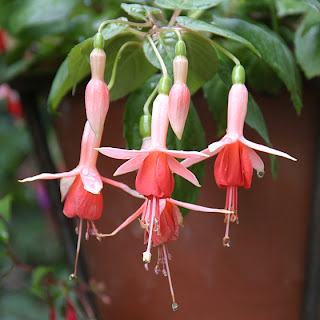 James Lee had an encyclopedic knowledge of plants and the greenhouses were quite extensive and almost as old as the nursery itself, offering a good stock of many species with a very full collection of Fuchsias, the best being F. ignea, a variety raised by Messrs. Veitch of Exeter. The flowers are very large, with the colours (crimson sepals and purple corolla) bright and strong, and the sepals reflexed. Other good varieties on offer were striata (Veitch); Don Giovanni, with a fine open corolla; Grand Master, similarly fine; and Prince of Orange, with pale and large flowers, shown at left.

In fact, so well known were Mr. Lee’s Fuchsia’s that there is a legend surrounding his acquisition of a certain variety. This tale has been told and appears in print numerous times, most floridly perhaps in the Ladies Repository of 1871. Here is the version that appeared in Sharpe’s London Magazine in 1846, entitled The Fuchsia Tree:

MR. SHEPHERD, the respectable and well-informed conservator of the Botanical Gardens at Liverpool, gives the following curious account of the introduction of that elegant little flowering shrub, the Fuchsia, into our English green-houses and parlour windows. Old Mr. Lee, a nurseryman and gardener, near London, well known fifty or sixty years ago, was one day showing his variegated treasures to a friend, who suddenly turned to him, and declared, “Well, you have not in your collection a prettier flower than I saw this morning at Wapping.”—”No! and ‘pray what was this phoenix like?”—”Why, the plant was elegant, and the flower hung in rows like tassels from the pendant branches; their colour the richest crimson; in the centre a fold of deep purple,” and so forth.

Particular directions being demanded and given, Mr. Lee posted off to Wapping, where he at once perceived that the plant was new in this part of the world. He saw and admired. Entering the house, he said, “My good woman, this is a nice plant, I should like to buy it.”—”I could not sell it for no money, for it was brought me from the West Indies by my husband, who has now left again, and I must keep it for his sake.”—”But I must have it.”—”No, Sir!”—” Here,” emptying his pocket, “here are gold, silver, copper;” (his stock was something more than eight guineas.)—”Well-a-day I but this is a power of money, sure and sure.”—”Tis yours, and the plant is mine; and, my good dame, you shall have one of the first young ones I rear, to keep for your husband’s sake.” —”Alack, alack!”—”You shall, I say, by Jove!” A coach was called, in which was safely deposited our florist and his seemingly dear purchase. His first work was to pull off and utterly destroy every vestige of blossom and blossom-bud; it was divided into cuttings, which were forced in bark-beds, and hot-beds; were re-divided, and sub-divided. Every effort was used to multiply the plant. By the commencement of the next flowering season, Mr. Lee was the delighted possessor of 300 Fuchsia plants, all giving promise of blossom. The two which opened first, were removed into his show-house, A lady came;—” Why, Mr. Lee, my dear Mr. Lee, where did you get this charming flower?”—” Hem! ’tis a new thing, my lady—pretty, is it not?”—” Pretty! ’tis lovely. Its price?— ” A guinea—thank your ladyship;” and one of the two plants stood proudly in her ladyship’s boudoir. “My dear Charlotte, where did you get it?” —” Oh! ’tis a new thing; I saw it at old Lee’s; pretty, is it not I”—” Pretty! ’tis beautiful! Its price?” —” A guinea; there was another left” The visitor’s horses smoked off to the suburb; a third flowering plant stood on the spot whence the first had been taken. The second guinea was paid, and the second chosen Fuchsia adorned the drawing-room of her second ladyship. The scene was repeated as new comers saw, and were attracted by the beauty of the plant. New chariots flew to the gates of old Lee’s nursery-ground. Two Fuchsias, young, graceful, and bursting into healthy flower, were constantly seen on the same spot in his repository.


He neglected not to gladden the faithful sailor’s wife by the promised gill; but ere the flower-season closed, 300 golden guineas chinked in his purse, the produce of the single shrub of the widow of Wapping; the reward of the taste, decision, skill, and perseverance of old Mr. Lee.

Along with Carl Von Linne, Mr. Lee wrote An Introduction to Botany, published in 1760, which went through five editions, and for many years was in the highest repute. James Lee died in the year 1795, at the age of eighty years, his partner,
Mr. Kennedy, having died previously.

The nursery was carried on by the sons of the two founders till 1817, when they dissolved partnership. It then became the sole property of James Lee, the second, who died in 1824, leaving it to his family. In 1827 John Lee was joined in the conduct of this important business by his brother Charles, who was born at the Royal Vineyard Nursery on February 8, 1808, and died on September 2, 1881. The firm was conducted under the title of John &; Charles Lee till 1877, when Mr. John Lee retired, and William Lee, the Son of Charles, joined his father in the management of the business. In 1881, however, upon the death of Charles Lee, the veteran John again, for a time, accepted harness, coming to the assistance of his nephew, who was very deeply affected by the loss of his father. The firm limped along until the early part of the 20th century and is, alas, no more.

2 thoughts on “Mr. Lee of Hammersmith”