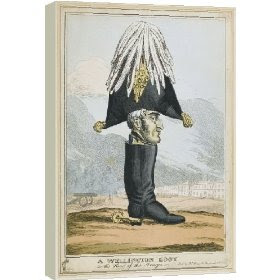 George Hoby was not only the greatest and most fashionable bootmaker in London, but, in spite of the old adage, “ne sutor ultra crepidam,” he employed his spare time with considerable success as a Methodist preacher at Islington. He was said to have in his employment three hundred workmen; and he was so great a man in his own estimation that he was apt to take rather an insolent tone with his customers. He was, however, tolerated as a sort of privileged person, and his impertinence was not only overlooked, but was considered as rather a good joke. He was a pompous fellow, with a considerable vein of sarcastic humour, as evidenced in the following anecdotes handed down to us by Captain Gronow –

I remember Horace Churchill, (afterwards killed in India with the rank of major-general,) who was then an ensign in the Guards, entering Hoby’s shop in a great passion, saying that his boots were so ill made that he should never employ Hoby for the future. Hoby, putting on a pathetic cast of countenance, called to his shopman, “John, close the shutters. It is all over with us. I must shut up shop; Ensign Churchill withdraws his custom from me.” Churchill’s fury can be better imagined than described. On another occasion the late Sir John Shelley came into Hoby’s shop to complain that his topboots had split in several places. Hoby quietly said, “How did that happen, Sir John?” “Why, in walking to my stable.” “Walking to your stable!” said Hoby, with a sneer. ” I made the boots for riding, not walking.”

Hoby was bootmaker to George III, the Prince of Wales, the royal dukes, Beau Brummell, most of the aristocracy and many officers in the army and navy. His shop was situated at the top of St James’s Street, at the corner of Piccadilly, next to the old Guards Club. Hoby was the first man who drove about London in a tilbury. It was painted black, and drawn by a beautiful black cob. This vehicle was built by the inventor, Mr Tilbury, whose manufactory was in a street leading from South Audley Street into Park Street. 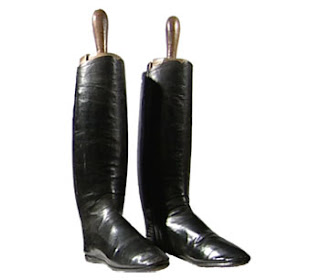 No doubt Mr. Hoby had patterns for all manner of desirable boots, evidenced not in the least by his impressive client list. However, he will forever be linked to a boot design not of his making. Of course I refer to the Wellington boot, a pair of the Duke’s own boots of this design are pictured at left. Hoby had been bootmaker to the Duke of Wellington from his boyhood, and received innumerable orders in the Duke’s handwriting, both from the Peninsula and France, which he always religiously preserved. The Duke asked Hoby to modify the 18th-century Hessian boot to a height below the knee, in order to make them more practical for walking and riding. The resulting  boot was made of softer calfskin leather, had no trim, boasted heels one inch high and fit more closely around the leg, making it more practical and hard-wearing for battle, yet comfortable for the evening. The boot was dubbed the Wellington and was quickly adopted by Hoby’s other customers.

Hoby was also bootmaker to the Duke of Kent; and as he was calling on H.R.H. to try on some boots, the news arrived that Lord Wellington had gained a great victory over the French army at Vittoria. The duke was kind enough to mention the glorious news to Hoby, who coolly said, “If Lord Wellington had had any other bootmaker than myself, he never would have had his great and constant successes; for my boots and prayers bring his lordship out of all his difficulties.”

Hoby may have had a penchant for sarcasm and a high opinion of himself (and his own influence upon British military history) but he knew how to run a business – Hoby died worth a hundred and twenty thousand pounds.

HELLO, HANDSOME – COURTESY OF SIR THOMAS LAWRENCE - by Kristine Hughes Patrone Recently, I was Googling portraits of the Duke of Wellington by Sir Thomas Lawrence (as one Read More
The Wellington Connection – Beer - Once upon a time in England, an alehouse/tavern licence was very expensive and was based upon the size of the premises. Read More
THE TREASURE HOUSES OF ENGLAND – HAREWOOD HOUSE - There are ten stately homes that have been designated as "The Treasure Houses of England," and three of them are Read More
Aristocratic Kennels - John Russel, 4th Duke of BedfordSir Joshua ReynoldsAristocratic gentlemen have always enjoyed a good hunt, one of the finest being Read More