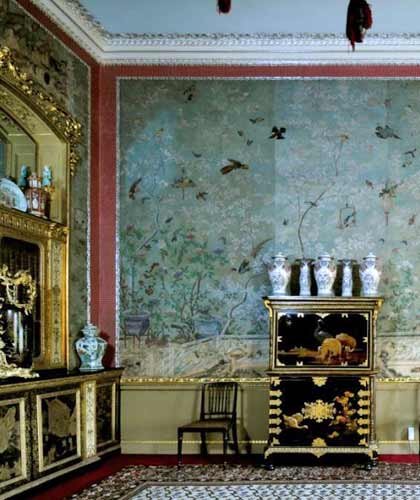 In 2010, there was an exhibit at Temple Newsam in Leeds entitled ‘A House of Birds: American Birds in a Chinese Garden,’ which told the amazing story of what happened when the former owner of Temple Newsam House, Isabella Ingram (known as Lady Hertford), decided to get creative with the décor in her sitting room in 1827. Once upon a time, Prinny (the future King George IV) was courting Isabella, and after a visit to the house in 1806, he gifted her mother, Frances, Lady Irwin, with several rolls of blue, handpainted Chinese wallpaper. 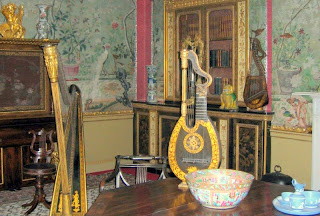 This wallpaper was hand-painted in China for the export market. It dates from c.1800 and was intended to form a panoramic view of an Oriental garden. The garden is planted with flowering trees and shrubs in vases, and the viewer looks out over an alabaster balustrade. 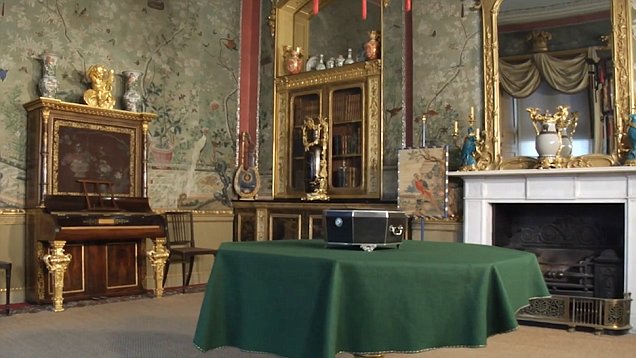 These wallpapers were made in panels about four feet square and were shipped in this form to Europe. However, Lady Irwin apparently had no liking, or use, for the paper, which mouldered away in a closet for the next twenty-one years.

Finally, Lady Hertford dug out the rolls of wallpaper in 1827 when she was redecorating the house and used them as the basis for the Blue Drawing Room (also known as the Chinese Drawing Room), creating the space in what had been the best dining room. By this time, however, the wallpaper had become a tad dated and its design was much more subdued than current fashion dictated. What’s a Lady to do? Lady Herford eventually hit upon a unique decor scheme and used a bit of decoupage to add some zip to Prinny’s wallpaper, embellishing the design with prints of exotic birds cut from John James Audubon’s famous publication The Birds of America. Audubon had visited England in order to get financial backing for the series and Lady Hertford had subscribed to the first issue. In a letter to his wife, Audubon tells her that Lady Hertford had cut out and used his prints to jazz up the wallpaper so that we know he was aware of the fact. Unfortunately, Audubon did not expand upon the mention, so we will never his views on the matter. 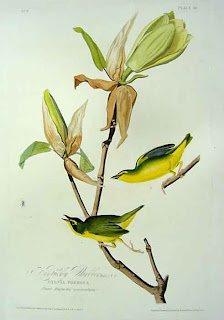 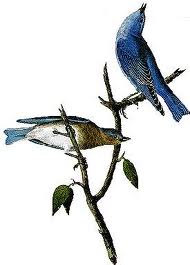 It should be noted that in 2000 an original copy of Audubon’s The Birds of America sold for $8.8 million dollars, which is still a world record price for a book. 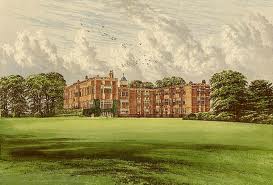 Temple Newsam house itself has a long history and was first mentioned in the Domesday Book. In 1155 it was given to the Knights Templar and Thomas, Lord Darcy built a four-sided courtyard house on the site in the early sixteenth century. In 1537 the property was seized by the Crown following his execution for treason (he was involved in the Pilgrimage of Grace rising). Henry VIII gave the house to Margaret, Countess of Lennox in 1544, and her son, Henry Lord Darnley, was born in the house the following year. In 1565 the estate was again seized by the Crown, this time by Elizabeth I, after Lord Darnley made the mistake of marrying Mary Queen of Scots.

The house fell into disrepair, and upon his accession in 1603, James I of England gave the estate to his cousin Ludovic, Duke of Lennox, and it languished tenantless until Sir Arthur Ingram bought the estate in 1622 for £12,000; he rebuilt the house as the three-sided building which exists today, one wing of the old house being kept as the central wing of the new house. There was a financial crisis when the family lost a fortune in the South Sea Bubble, but that was sorted out by a son marrying an heiress; so more work could be done on the house, and Capability Brown landscaped the park.

Through the nineteenth century there were major works done on the interiors and the grounds, and in 1904 the estate was inherited by a nephew, Edward Wood, first Earl of Halifax; in 1922 he sold some of the parkland to Leeds Corporation for £35,000 and they eventually acquired the house for free.

1 thought on “The Tale of Lady Hertford, Prinny, Audubon and Chinese Wallpaper”