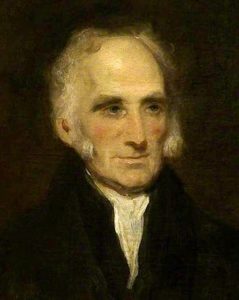 At the end of the Napoleonic Wars, Sir Gilbert Blane (1749–1843), Physician of the Fleet, argued that the incidence of insanity in the Royal Navy, which he estimated at one in a thousand, was seven times that of the general population. To explain this striking disparity, he identified head injuries, sometimes the result of black powder intoxication in the close confines of warships, together with the shock and blast experienced by gun crews. It was observed that the majority of inmates of a London asylum were seamen who had been sent there after the Battle of the Glorious First of June in 1794. It was theorized that mental illness amongst sailors exposed to combat was possibly related to the phenomenon of wind contusions or tingling, twitching, and even partial paralysis diagnosed in soldiers who had been close to the passage of a projectile or its explosion but had not actually suffered a physical wound.

Click here for a link to the firing of a rolling broadside by the HMS Victory, Nelson’s flagship. The video lasts less than a minute. Imagine hours of this from the inside of a ship. Or imagine seeing this coming at you from another ship in the heat of battle.

During the nineteenth century naval doctors acting as advocates for their patients used mental illness as a criminal defense. Captain G. Scott of the Stately wrote to Nelson on the recommendation of Dr John Snipe to request that the application for a court martial for John Burn, a royal marine, who had struck an officer, be withdrawn on the grounds that the offence was occasioned by insanity. Implicit in this defense was the idea that sailors who had experienced the effects of brutal battles could have their reason disturbed and hence not be fully responsible for their actions.

In 1808, the navy’s lack of provision for clothes for sailors confined in places like Bethlem meant some had only a blanket to wear. Monies had to be dedicated specifically to the care of specific sailors. Situations such as this, once reported to the admiralty, were part of the impetus to establish facilities under the control of the navy and dedicated to the care of those sailors suffering from wounds that could not be seen.

The number of sailors suffering from mental illness was sufficient for the Royal Navy to make special provision for their treatment. Between 1794 and 1818, for example, 1083 officers and ratings were admitted to Hoxton House Asylum, which had been founded in 1695 with Chatham Chest funds to treat naval and government cases. Most of these admissions were then transferred to the Bethlem Hospital at Moorfields for further care, though 364 were regarded as cured. As a Crown institution, Bethlem was obliged to admit patients referred by the Sick and Wounded Seamen’s Office and the War Office.

However, from its opening in 1753,the Royal Hospital at Haslar had admitted psychiatric patients and subsequently Rear Admiral Garrett was reported as saying that a seaman who has lost his reason in the service of the Crown should receive the love and attention on a scale not less than a seaman who has lost a limb in the same cause. In August, 1818 the navy opened a Lunatic Asylum at Haslar. In 1819, wards for soldiers were established at the asylum at Chatham. By the 1820s the emphasis was on moral treatments and patients were encouraged to work in the gardens, take exercise, and undertake tasks in the hospital. Case notes showed that most of those admitted were either psychotic or severely depressed, rather than troubled by the acute effects of battle; most were regarded as incurable.

The naval hospital at Great Yarmouth had been constructed between 1809 and 1811 to treat the sick and wounded of the North Sea Fleet. The Royal Naval Hospital in Yarmouth was also a major hospital for naval lunatics. Taken over by the army in 1844, it housed a Military Lunatic Asylum until the outbreak of the Crimean War when the Admiralty re-acquired the building.

The advantage to facilities established and run by the military were:

Some things to remember:

For records and more insight into the admission of soldiers and sailors into military lunatic asylums check out the section on naval asylums at the British National Archives.