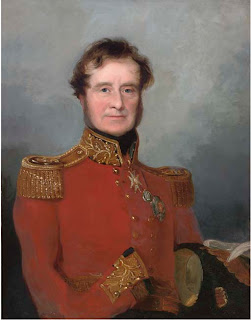 The Duke of Wellington is connected to the Charge of the Light Brigade through his association with Lord  Fitzroy Somerset (at left), who was both his military secretary and his nephew by marriage.

Field Marshal FitzRoy James Henry Somerset, Baron Raglan (1788 – 1855), was a British soldier who distinguished himself particularly in the Spanish parts of the Napoleonic campaign. He was badly wounded by five stab wounds to the shoulder at the Battle of Buçaco, after Fuentes de Onoro became brevet-major, as a volunteer helped storm Ciudad Rodrigo, and subsequently led the storming of Badajoz, and personally secured and quickly held one of the gates before the French could respond.

He was the eighth and youngest son of Henry Somerset, 5th Duke of Beaufort, by Elizabeth, daughter of Admiral the Hon. Edward Boscawen. His elder brother, General Lord Edward Somerset (1776–1842), distinguished himself as the leader of the Household Cavalry brigade at the Battle of Waterloo. Fitzroy Somerset was commissioned onto the 4th Light Dragoons on 9 June 1804, being promoted to Lieutenant on 30 May 1805. In 1807 he was attached to the Hon. Sir Arthur Paget’s (later Marquess of Angelsey) embassy to Turkey, and the same year he was selected to serve on the staff of Sir Arthur Wellesley in the expedition to Copenhagen. In the following year he accompanied Wellesley to Portugal, and during the whole of the Peninsular War was at his right hand, first as aide-de-camp and then as military secretary. Lord Hardinge later remarked that he had first become acquainted with Lord FitzRoy Somerset at the battle of Vimiera, “when we of the same age were astonished at the admirable manner in which he then performed the duties of aide-de-camp, and at the great respect with which he was treated by Sir Arthur Wellesley. It was remarked on all occasions that if there was a word of advice to which that great man would listen with unusual patience, it was that which proceeded from Lord FitzRoy Somerset. During the whole period that the Duke of Wellington was in the Peninsula—with the exception, I believe, of a short time when he was in England for the benefit of his health—Lord FitzRoy Somerset was at his right hand. He was present at every one of those actions which illustrate the career of our great commander; on every occasion he was foremost in the field, and he displayed the same valour and courage which have so conspicuously marked his conduct in the Crimea.”

On 6 August 1814 he married Lady Emily Harriet Wellesley-Pole, daughter of the 3rd Earl of Mornington,  the Duke of Wellington’s niece. As Lady Shelley tells us, “On August 5, 1814, the Duke dined with his regiment at Windsor, and on the following morning returned to town to be present at Emily Pole’s marriage with Lord Fitzroy Somerset. While passing through Brentford the wheel of his carriage came off twice. The Duke immediately sprang into a market cart, in full costume as he was, and arrived at the church only a few minutes after the time fixed for the wedding. He gave the bride away, and then dressed for the opera. I met him there, and he took care of me to the carriage.”

Between the Napoleonic campaigns, Lord Somerset was secretary to the British embassy at Paris and when Napoleon returned to France he once more became aide-de-camp and military secretary to the Duke of Wellington. At Waterloo his arm was injured and amputated. At the end of the surgery he told orderly not to take away his arm until he had removed a ring that his wife had given him. He quickly learned to write with his left hand, and on the conclusion of the war resumed his duties in Paris.Wellington recommended him as the aide-de-camp to the Prince Regent, a post that was given on 28 August 1815 together with the rank of Colonel. Raglan returned to the British embassy at Paris and remained there as secretary until the end of 1818 when the allied armies were withdrawn from France.  For two short periods in the 1820s he was MP for Truro. In 1819 he was appointed secretary to the Duke of Wellington when Wellington became Commander-in-Chief of the army after the Duke of York died on 22 January 1827 and from 1827 till the death of the duke in 1852, Somerset served as his Military Secretary at the Horse Guards. Wellington described him as ‘a man who wouldn’t tell a lie to save his life’.

Somerset’s political career culminated in his being appointed a Privy Counsellor in 1852, when he was created Baron Raglan. 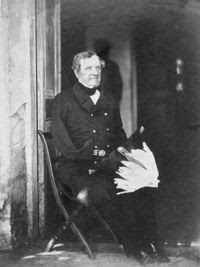 At the outbreak of the Crimean War in 1853, Raglan was chosen to command the British troops, despite the fact that he was sixty-five years old and had never led troops in the field. He left London on 10 April and reached Constantinople at the end of the month. In 1854, Raglan (at left) was made full General and joint commander of the Crimean campaign in co-operation with a strong French army under Marshal St. Arnaud and afterwards, up to May 1855, under Marshal Canrobert. Here his diplomatic experience stood him in good stead in dealing with the generals and admirals, British, French and Turkish, who were associated with him; however, the trying winter campaign of the Crimean War showed that becoming a General was a step too far for Raglan. His failure to give coherent or timely commands on the field of battle led to numerous mistakes, and his blind ignorance of the growing rivalry between the Earl of Lucan and the Earl of Cardigan would have tragic consequences in the infamous Charge of the Light Brigade.

The Charge of the Light Brigade was a disastrous charge of British cavalry led by Lord Cardigan against Russian forces on 25 October, 1854 during the Battle of Balaclava in the Crimean War. Subsequently Raglan was pilloried by the press, rightly or wrongly, for the conditions which led to so many troops being unfit to serve, falling seriously ill or dying, and being responsible for the incompetent chain of command and poor tactics which led to Inkerman and then the Charge of the Light Brigade. To be fair, much of the responsibility must fall on authorities in the UK, and appalling logistics from there.

Today, the incident is best remembered as the subject of a famous poem entitled The Charge of the Light Brigade by Alfred, Lord Tennyson, whose lines have made the charge a symbol of warfare at both its most courageous and its most tragic.

Oddly enough, despite Raglan’s military unpopularity, he was put in charge of the general assault on Sebastapol on 18 June 1855 – the anniversary of the Battle of Waterloo. It was to be preceded by a two-hour cannonade but the French commander decided at the last moment to attack at daybreak, a decision that Raglan reluctantly accepted. The result was disastrous. The French columns were driven back with heavy loss. Raglan ordered the British forward against the Redan where the two leading British columns met a murderous fire of grapeshot and musket fire. Raglan felt responsible for the failure. He was already suffering from dysentery and on the evening of 28 June he died. His body was taken to a ship called the Caradoc with the full military honours and the seven miles of road from his headquarters to Kazatch Bay were lined with troops. The ship reached Bristol on 24 July; Raglan was buried privately at Badminton on the 26 July.

3 thoughts on “The Wellington Connection: The Charge of the Light Brigade”