Queen Victoria was a devoted dog lover and owner throughout her life and raised more than 15 different breeds of canines. 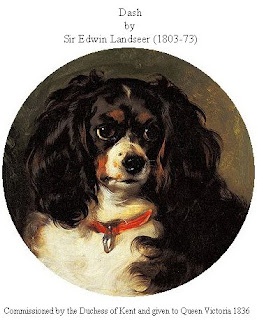 Perhaps the most famous of these dogs remains Dash, who was her faithful companion during her childhood. The artist Sir Edwin Landseer first won Victoria’s favour when he painted Dash, a King Charles spaniel. Dash had been presented to Princess Victoria in 1833 by the vile Sir John Conroy, personal secretary to her mother, the Duchess of Kent. No doubt Conroy hoped that Dash would mitigate the ill feelings Princess Victoria harbored towards him due to his machinations. Princess Victoria and Dash were soon inseparable and he lived by her side, with the Princess dressing him in scarlet jacket and blue trousers, and at Christmas she gave him three India-rubber balls and two bits of gingerbread decorated with holly and candles. There is a scene in the movie, Young Victoria, which illustrates how the newly crowned Queen returned home from her coronation in order to bathe Dash. Dash also appears in a garden scene in the film. 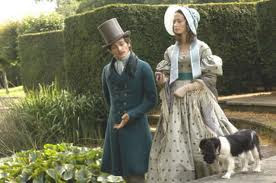 When Dash died in 1840, three years after she became Queen, Victoria buried him herself at Adelaide Cottage, and had inscribed on his tombstone: `Profit by the example of Dash, whose attachment was without selfishness, his playfulness without malice, and his fidelity without deceit.’ 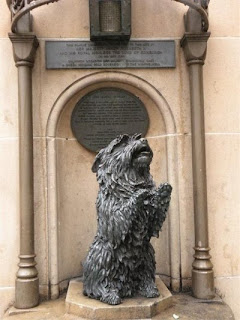 A bronze statue of Islay stands in Sydney, Australia

Then there was a Skye terrier called Islay, the little dog Victoria came to love most of all. She taught him to beg for treats. Combined with a pair of wet, soulful eyes, Islay’s gentle begging earned him treats galore from the household and visitors alike. Once again, Landseer was inspired to capture one of the Queen’s dogs, sometimes in the act of gathering tasty morsels. 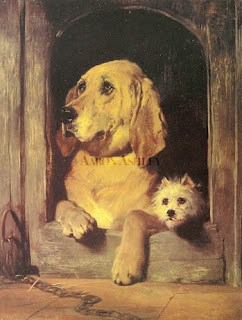 Islay was the inspiration for Landseer’s painting entitled `Dignity and Impudence‘, one of his most successful works. 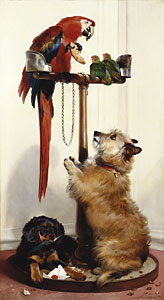 Islay also features prominently in a painting Landseer created in order to amuse the Queen at Balmoral. It shows the terrier doing his begging act before a macaw, who sits high on his perch holding a large biscuit, which he is feeding two lovebirds. Next to Islay at the bottom of the painting is Tilco, a Sussex spaniel, who nurses a wound on his nose inflicted upon him by the macaw after he’d tried to take the biscuit away. When Landseer unveiled the work before the Queen at Balmoral, Lord Melbourne was said to have commented, “Good God! How like!” 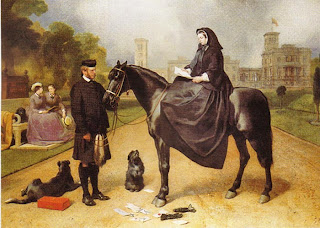 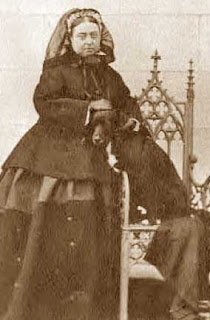 In later years, Queen Victoria’s favorite dog and constant companion was Sharp, a smooth-coated Border Collie, born in 1854.  A statuette of Sharp in silver gilt dominated her dining table. 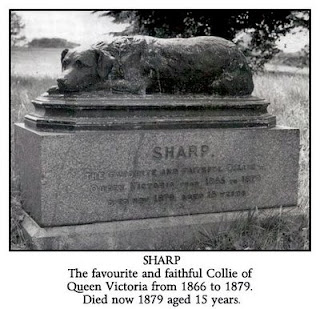 Sharp lived for 15 years. A statue of him stands over his grave in Windsor Home Park, Berkshire, England. After Sharp, Queen Victoria was given another Collie named Noble. 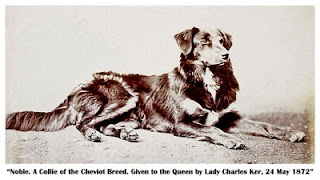 From Queen Victoria’s Journal of a Life in the Highlands – Sunday, September 14, 1873:

My favorite collie Noble is always downstairs when we take our meals, and was so good, Brown making him lie on a chair or couch, and he never attempted to come down without permission, and even held a piece of cake in his mouth without eating it, till told he might. He is the most “biddable” dog I ever saw, and so affectionate and kind; if he thinks you are not pleased with him, he puts out his paws, and begs in such an affectionate way. 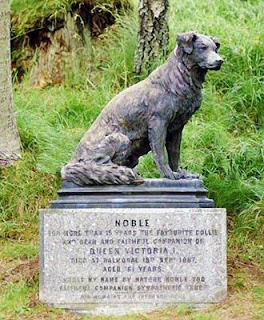