In 1959, Roy Strong became an assistant keeper at London’s National Portrait Gallery and was appointed as its Director in 1967. Young, flamboyant and energetic, Strong worked tirelessly to bring the Gallery into the 20th century and to mount exhibitions that would appeal to a wide range of visitors, from those who knew little about art to those who were some of the country’s greatest collectors.

In 1973, Strong became the youngest ever director of the Victoria and Albert Museum. Again, Strong set about putting the collections into modern order and putting on shows that were meant to shake up the status quo, including his legendary exhibition, The Destruction of the Country House, which raised awareness of the loss of so many of the country’s stately homes and helped to energize the efforts of the heritage sector. Strong has also written columns for several newspapers and magazines and has written books on history, design and gardening, a personal passion of his.

I came across the Strong diaries on a recent trip to Hatchard’s, London. Many of you will already be aware of my fondness for diaries – this is the most contemporary of my collection. As with any good diary, the author has to have a keen eye for detail, a modicum of wit and the ability to use snark to good effect. Strong does not disappoint. Strong’s diaries chart his career, the inner workings of two of London’s greatest museums, and provide insight into the personalities of the day and those who comprise the circle in which he moves. A favourite of the Queen Mother, Princess Margaret and Cecil Beaton, Strong also documents the last hoorah of many society stars from an earlier age. Here is just a sample of the entries within –

18 December 1969 – The event of the day was Lady Adean’s drinks party. There is a custom that once a year just before Christmas those who have grace and favour residences all give parties on the same evening, or at least those who have windows which look out on to the inner courtyard of St. James’s Palace. In the middle blazed two coke-filled braziers supplied, I was told, free of charge by the gas company, while an ancient lamplighter lit the gas lamps surrounding the courtyard. At seven promptly the Bach Choir entered in procession, carrying candles and singing carols. Within, the chatter and clink of glasses stopped, and everyone moved towards the windows to look down and listen. It was enchanting.

16 March 1970 – A party by Sybil Cholmondeley at her residence at No. 12 Kensington Palace Gardens – I was ushered through to the drawing room at the back of the house overlooking the gardens, a huge room in discoloured green with a chimneypiece at either end, in both of which a log fire blazed. Over one hung the famous Oudry of a dead swan, over the other a portrait by Sargent of the hostess, in the guise of an Infanta by Coello. From this one gathered that in her day she had been a great beauty. . . The other guests were the Duke and Duchess of Devonshire, William Plomer, the poet, and Lady Fermoy . . . The Duke was twitchy as usual, the Duchess complaining that she only had an hour and a half to choose fabrics for clothes at Liberty’s. They formed a great contrast, he somewhat shambling, she with not a hair out of place. She hates plays, opera and most ballet, and anything that in any way constrains her. He in sharp contrast, admitted to loving them all.

16 June 1970 – Diana Cooper’s Warwick Avenue house always seems solidly 1930’s romantic in mood . . . she has a timeless magic which cuts across the generations and makes differences in age irrelevant. She’s still beautiful, with that delicate bone structure and those huge pale aquamarine eyes which always slay me . . . She was making one of her specials when I arrived, that lethal mix of vodka, grapefruit juice and mint of which I have learned to beware. Before I could say anything she grabbed me by the arm saying, ‘Such a disaster. At 12:30 I went to check that everything was in order and found that the cook was coming tomorrow . . . and such a distinguished luncheon party.’ . . . . The result of this catastrophe was that the party ended up in the Maida Vale Steakhouse, a typical hostelry of the late Sixties with tartan on the walls, plastic table tops and imitation leather banquettes. . . So there we were, an ex Prime Minister (Harold Macmillan), a marquess and marchioness (Salisbury wearing a straw hat engulfed in white net), an ex-American ambassador, myself and Diana Phipps, who had just bought a foot by Rubens in the Portobello Road . . . By the evening news of this bizarre gathering had reached the Evening Standard. What it showed was that Diana was unsinkable.

26 June 1970 – I went on . . . to visit Shirburn Castle at Watlington to inspect the Macclesfield collection for an Estate Duty Office evaluation. No one had been able to get into the place for years and the family had a reputation for eccentricity. The castle was, it seemed, Regency Gothic with a moat and drawbridge but it left me totally unprepared for the pileup of tat and junk within. Lord Macclesfield made a brief appearance in a plebeian cloth cap and overalls, carrying a cardboard box, for all the world like a removal man. I was taken around by his son, Lord Parker, and the pictures were staggering, the dining room lined with seven Stubbs and a great Hogarth. Later I learned that the Macclesfields were so disliked that the locals burnt down their model farm.

3 – 5 July 1970 – A weekend at Boughton – Viewing Boughton from the road the average person would wonder what kind of institution this vast pile now was. But, oh no, every bit of it is lived in still. The front is late seventeenth century, very French in style, and there’s a huge stable-block to the left with a cupola. . . In the middle there’s a grass courtyard with beds of lavender and sweet-smelling climbers . . . I concluded that it was the smell, or rather fragrance, of the house which was so magical, the white morning room scented with lilies, the unforgettable ancient linen (I saw sheets dated 1811), the curious faint odour of the tapestries, one of which was tossed across my bed as a counterpane.

Mollie Buccleuch (nee Mary “Mollie” Lascelles) would be a bonus to any great house, for both her energy and her enthusiasm appear to be unending.  A complete tour of the house is obligatory and that includes the attics, where sixty tapestries exist rolled in bundles and where Catherine of Bragaza’s marriage furniture is stored. It takes three hours non-stop and there’s no sympathy for stragglers. Those that didn’t make it, like John Pope-Hennessy, who spent one weekend there . . . aren’t asked again. Mollie leads with her sing-song voice with its 1930s inflections. Walter Buccleuch lets it all wash over him, a P.G. Wodehouse duke in baggy tweeds, but noble in his way and extremely sweet-natured.

5 June 1979 – One of the V&A’s branches was Apsley House at Hyde Park Corner. Relations with the Wellingtons were never easy. They got off to a bad start in 1974 when I allowed the Byron Society in for a glass of sherry after they had laid a wreath at the statue of Byron close by, on a freezing winter’s day. That prompted a very long letter from the Duke saying how his ancestor, the first Duke, had not approved of Byron and that these poor members of the Byron Society should never have been allowed in. Apsley House in fact belonged to the nation and the Wellingtons were merely tenants, a fact of which from time to time one had to remind them.

We are just about to purchase the famous Wellington Egyptian service for 350 thousand pounds. Valerian Wellesley is a very stupid man. Indeed there have been no brains in the family since the first Duke and no money. They have huge Capital Transfer Tax debts to meet and they are broke. Neither the present, nor the future duchess has brought any money in. The saga began with Valerian Wellington being asked for a boar hunt weekend with the President of France. After this he had the nerve to ask for one of the military banners, taken by the first Duke from Napoleon’s army and hung at Apsley House, to give as a ‘thank you’ present to the President. I put him down rather forcefully on that one. At any rate it was during that weekend that the service was apparently sold to the French. The Reviewing Committee for Works of Art, of course, stopped it, much to his fury. That transaction then became public, also to his fury, as he is now seen as someone thoughtless of the national heritage, selling it abroad. It will mean that as a result of the purchase the Museum (the V&A) will be broke again as usual, but it will be worth it.

The diaries of Sir Roy Strong continue in a volume that covers 1988 – 2003, which I plan on reading as soon as possible. 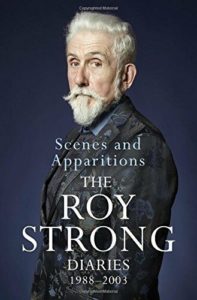 1 thought on “ON THE SHELF – THE ROY STRONG DIARIES”