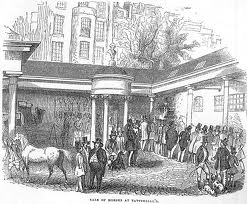 Tattersall’s is usually looked upon as the headquarters of horsey London. It is certainly the headquarters of the horse of pleasure, but, as has been made clear enough in these pages, that sort of horse is simply lost in the thousands that throng our streets. Tattersall’s is practically the great betting exchange, but the visitor to any of the Monday or Thursday sales will be puzzled to find the least sign of a betting atmosphere at Knightsbridge. The two things are as distinct on those days as, say, the Bank of England and Capel Court. The yard is under cover, a lofty glass-roofed hall, which cost 30,000L to build, and which is as big as many a railway station. It is surrounded by a handsome gallery, behind the arched and columned screen of which every type of pleasure vehicle seems to be ‘on view,’ duly numbered in ‘lots’ for the hammer. In the centre of the gravel area is a drinking fountain, surmounted by the quaint old Georgian bust of the founder, with its eyes fixed on the entrance doors, and its thoughts apparently as far away from water as are those of the crowd around.

It is a different variety of crowd from that which gathers in any other sale yard. London has several ‘repositories.’ There is Aldridge’s in St. Martin’s Lane; there is Kymill’s in the Barbican—these two being the chief; and there are Stapleton’s out in the East, and Ward’s in the West, and the Elephant and Castle in the South, and others which many a horse knows well. There is a sort of horse that ‘knows the lot’; the sort that ‘does the round,’ and brings more money to the auctioneers than to the unfortunate buyers, who ‘find him out’ in a fortnight, and ‘get rid of him sharp’ to an unwary successor; a wonderful animal this horse, ‘quiet in harness, a good worker,’ who has only two faults, one that ‘it takes a long time to catch him in a field,’ the other that ‘he is not worth a rap when caught.’ But this kind of horse does not put in many appearances at Knightsbridge. Tattersall’s has a character to keep up, and it has kept it up for over a hundred years now. It is eminently respectable, from the unused drinking fountain and the auctioneers’ hammer, one of the good old pattern, with a rounded knob instead of a double head, down to the humblest hanger-on. 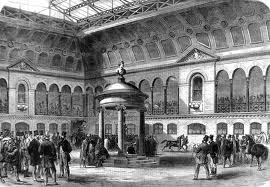 Entering one of the stables which open on to the yard, and have a dozen or more roomy stalls apiece, we find a horse being measured, to make sure he is correctly described. One would think he was a recruit, from the careful way in which the long wooden arm is brought down so gingerly as not even to press in his skin. Soon his turn will come. Up in the gallery will go his number, and the young auctioneer in the rostrum below —which has a sounding-board, as if it were a cathedral pulpit—will read out his short title.

Out comes the horse at last—tittuppy-trot, tittuppytrot. ‘Ten,’ says one of the crowd. ‘Ten guineas,’ echoes the auctioneer. ‘Twelve,’ comes from the crowd; ‘twelve guineas,’ echoes the Varsity man in the pulpit. And so the game goes on with nods and shouts, each nod or look being worth a guinea, so that the solo runs, ‘Thirteen—thirteen guineas—fourteen guineas—fifteen guineas—sixteen—sixteen guineas— seventeen—eighteen—twenty guineas’—quite a singsong up to—’ twenty-eight guineas’—and so gradually slowing, with a spurt or two to ‘forty guineas’—and then a grand noisy rally till ‘fifty-five’ is reached. ‘Fifty-five?—Fifty-five?—Fifty-five? Last time, Fiftyfive!’—knock—and away goes Captain Carbine’s hunter, to make room for a ‘match pair’ that will change hands at 165 guineas, or perhaps fifty more if the season has begun—the bidding always in guineas, in order that the auctioneer may live on the shillings, as Sir John Gilbert used to do in the old days when the guineas flowed to him for his drawings on the wood.

If you want riding horses or carriage horses you go to Tattersall’s; if you want draught horses for trade, you go to Bymill’s or Aldridge’s, where you not only get the new-comers, but also the second-hand, and many-another-hand, from London’s stables. With those second-hand horses we need not overburden ourselves; our task has been to bring the first-hand horses into London, and sort them out. We have brought in the ‘bus horses, the tram horses, the cab horses, the railway horses, the cart and many other horses. Of the cart horses we could, if it were worth while, say a good deal more. We have said nothing of the distillers, the millers, the soap merchants, the timber merchants, the better class contractors, and half a dozen other firsthand horse-owning trades. Some of the distillers’ horses are said, by those who know, to be as good as any in the brewers’ drays, and by ‘as good’ is meant that they are of the same breeding, and can be compared with them, owing to their being at somewhat similar work. 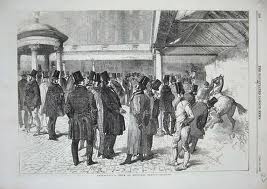 If you think you know anything of horseflesh and want the conceit taken out of you, by all means attend a repository sale. You will see a horse—it may be a likely mare—led from her stall and stood ready for her turn, and you will probably value her at, to be reasonable, 20L; and she looks worth not a penny less. When her number goes up at the window you will see her shown at her best at a run, and, for a moment, you will be inclined to add hi. to your estimate, But soon a chill will run down your back as you hear the bidding. ‘Three! Three and a half! Four!’ a long pause. ‘Four and a half! Five!’ jerks the auctioneer in the corner, with about as much expression as if a penny had been put in his mouth to work him automatically. ‘For the last time! Five!’ Knock. Five guineas! And as the mare is led back to her stall she seems to Change before your very eyes, and you are ready to admit that she doesn’t look worth a penny more!