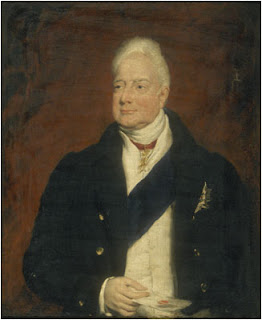 William IV, the Sailor King, died on 20 June 1837. He was the third son of George III and younger brother and successor to George IV and was the last king and penultimate monarch of the House of Hanover. While William’s reign was much more sedate than that of his brother, George IV, with less scandal and spending and more attention being paid the business of running the country, William IV did have one bane to his existence – his sister-in-law the Duchess of Kent, mother to Princess Victoria.

King William’s problems with the Duchess began early in his reign – in fact, at his coronation, as related in a book called When William IV was King By John Ashton:

During the procession to the Abbey (for the Coronation of William IV) the weather was fine, and the sight a brilliant one; but, soon after one o’clock, a very heavy rain descended ; the wind, too, blew with great violence, and occasioned rattling and tearing among the canvas canopies of the newly erected stands. It ceased for a short time, between two and three, when it broke out afresh, and was particularly lively when the ceremony was over, at half-past three. It quite spoilt the return procession, some of the carriages driving straight away, and those that fell into rank had their windows up.

In spite of the weather, London was brilliantly illuminated, and the theatres and Vauxhall Gardens were thrown open free. There was a display of fireworks in Hyde Park, at which many were more or less hurt by the falling rocket-sticks, six so seriously as to have to be taken to St. George’s Hospital. Throughout the country the festivity was universal. One little thing marred the universality. The Duchess of Kent was not present at the coronation, neither was the Princess Victoria. It was an open secret that the King and the Duchess were not on friendly terms, but it was thought very bad taste on her part not to be present.

Though more contretemps between the King and the Duchess were to come (as will be shown in future posts), for the time being, all was well in the land. In his Memoirs, Charles Greville included the following entry for July 18th.— King George had not been dead three days before everybody discovered that he was no loss, and King William a great gain. Certainly nobody ever was less regretted than the late King, and the breath was hardly out of his body before the press burst forth in full cry against him, and raked up all his vices, follies, and misdeeds, which were numerous and glaring enough.

The new King began very well. Everybody expected he would keep the Ministers in office, but he threw himself into the arms of the Duke of Wellington with the strongest expressions of confidence and esteem. He proposed to all the Household, as well as to the members of Government, to keep their places, which they all did except Lord Conyngham and the Duke of Montrose. He soon after, however, dismissed most of the equerries, that he might fill their places with the members of his own family. Of course such a King wanted not due praise, and plenty of anecdotes were raked up of his former generosities and kindnesses. His first speech to the. Council was well enough given, but his burlesque character began even then to show itself. Nobody expected from him much real grief, and he does not seem to know how to act it consistently; he spoke of his brother with all the semblance of feeling, and in a tone of voice properly softened and subdued, but just afterward, when they gave him the pen to sign the declaration, he said, in his usual tone, “This is a damned bad pen you have given me.” My worthy colleague, Mr. James Buller, began to swear Privy Councillors in the name of “King George IV.—William, I mean,” to the great diversion of the Council.

A few days after my return I was sworn in, all the Ministers and some others being present. His Majesty presided very decently, and looked like a respectable old admiral. The Duke [of Wellington] told me he was delighted with him— “If I had been able to deal with my late master as I do with my present, I should have got on much better”—that he was so reasonable and tractable, and that he had done more business with him in ten minutes than with the other in as many days.”